Fans of Pixar’s Cars franchise will be happy to know that the Cozy Cone exists in real life… sort of! The Wigwam Motel is a chain of motels first established in the 1930s whose rooms are giant, teepee structures forming a semi-circle around the lobby. Pixar filmmakers were obviously inspired by this concept during the development of Cars, as evident by the Cozy Cone’s larger-than-life orange caution cone rooms.

Today, you can stay in one of two Wigwam’s while cruising down Route 66: one in Holbrook, Arizona, and another in San Bernardino, California.

Only accessible by train or on foot, this 41-room hotel in the far, far away village of Finse, Norway is gateway to the spectacular Hardangerjøkulen glacier. The glacier is known to locals and tourists alike simply as “Hoth” as it was the primary filming location for scenes on the iconic ice planet in the 1980 classic, Star Wars: Episode V – The Empire Strikes Back.

Back in 1979, cast and crew (including Mark and Carrie) stayed at the Finse 1222 while filming scenes on the glacier, the nearby valley, and the immediate area on the rear side of the hotel. No stay here is complete without a visit to the hotel’s museum on the second floor, showcasing a collection of news clippings, production photos, and other memorabilia memorializing their connection to the Star Wars galaxy.

Pro-tip: plan your visit to coincide with the annual VISIT HOTH program, a Comi-Con of-sorts devoted to bringing fans together on the beloved ice planet. 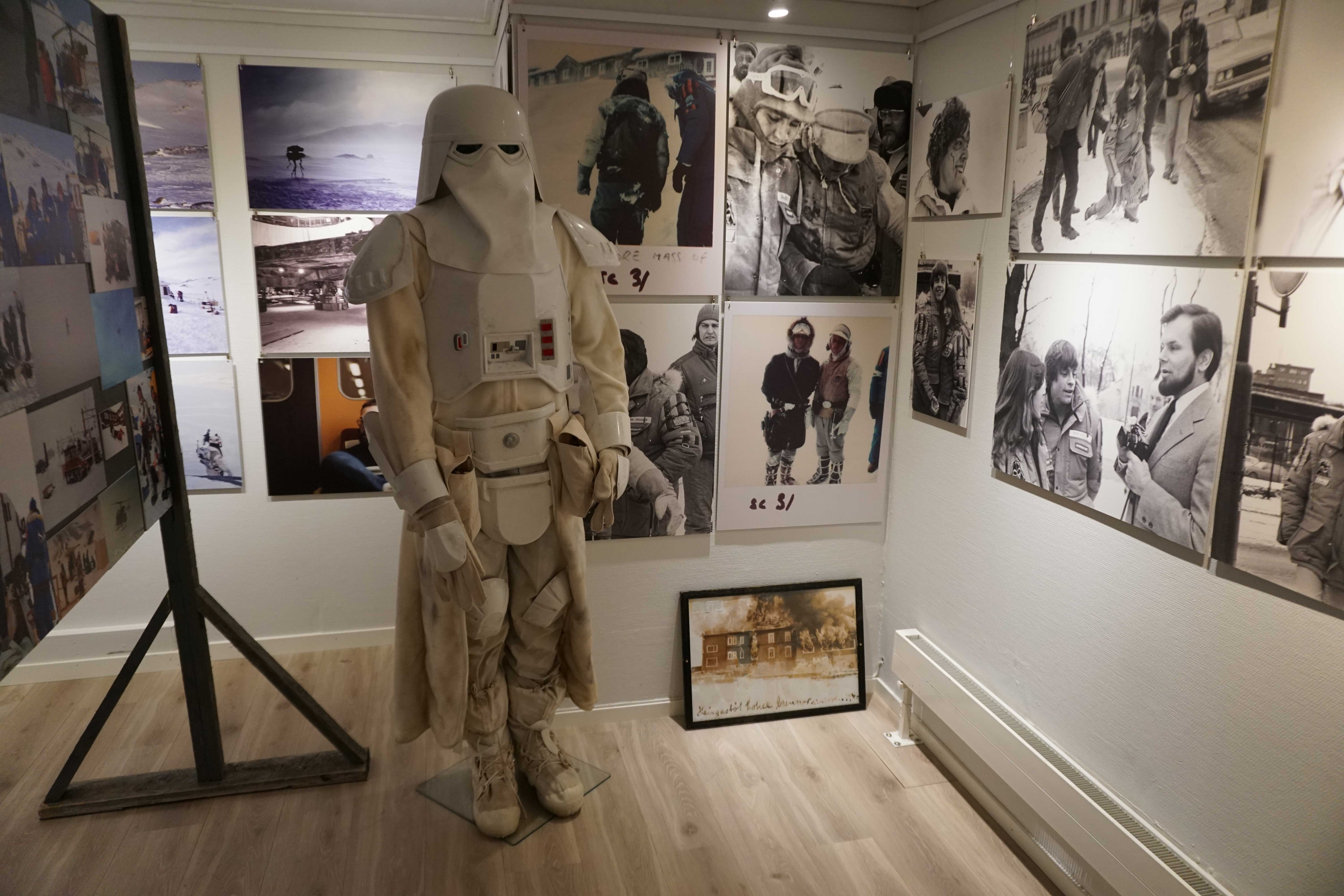 A snowtrooper keeps watch over the hotel’s “Visit Hoth” gallery

Want to rest your head in another Star Wars filming location? How about a night in Luke Skywalker’s childhood home?! Tunisia’s Hotel Sidi Driss is an old, Berber cave dwelling that played the role of the Lars family homestead in both 1977’s Star Wars: Episode IV – A New Hope and again in 2002’s Episode II – Attack of the Clones.

The interior courtyards still feature remnants from filming including murals and set dressing as the current owners are embracing Star Wars lore to draw in tourists. If you plan to stay here overnight, don’t expect a luxurious experience as accommodations are comfortable but bare-bones… what do you expect on the remote planet of Tatooine? 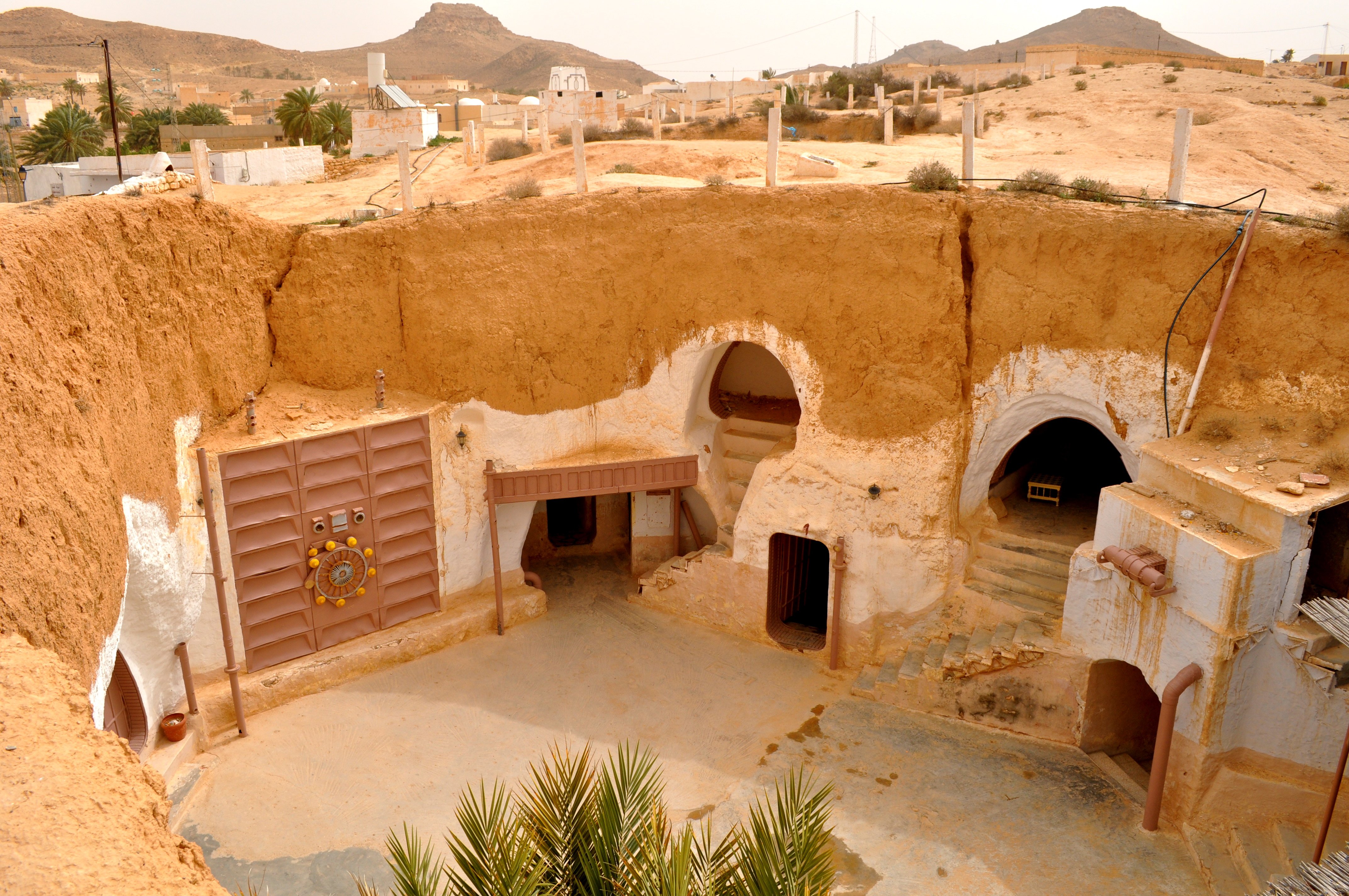 The hotel’s interior is fairly well preserved given its desert location. Photo by Panegyrics of Granovetter on Flickr

Switching over from the Star Wars galaxy to the Marvel Cinematic Universe: A rustic cabin sits on the east side of “Big Lake” in Fairburn, Georgia – just outside of Atlanta. Marvel aficionados will recognize the rural cottage as the “Eco-Compound”, Tony Stark’s cabin seen in Marvel’s Avengers: Endgame (2019). Though interior shots were filmed on a nearby soundstage, exteriors (including the emotional gathering toward the end of the film) were shot here with all of the stars in attendance.

If you love it 3000, this three-bedroom cabin is available to spend the night via Airbnb with prices starting at $800 (new to Airbnb? Use our sign up link here for a coupon).

For an extra fee, Ant-Man will serve you coffee on the porch. Image ©Disney/Marvel Studios

Sticking with the Endgame theme, this next location takes us back to Norway… sort-of. You may remember that (fat) Thor and other Asgard refugees chose to re-established their home in Norway as a town called New Asgard. In real-life, filming took place in a tiny fishing village on the coast of Scotland called St Abbs. The town was so enthralled with their big-screen appearance that the local government officially declared the town as “twinned” with the fictional one, complete with signage near the harbor.

If you want a place to stay, check out Seaview B&B – though not directly connected with the film, this clifftop cottage is your best bet for a stunning view of the harbor area seen onscreen.

If idol chasing and graverobbing is more your speed, head to Antonio, Colorado, halfway between Albuquerque and Colorado Springs, and spend the night in Indiana Jones’ childhood home. The Indiana Jones Bed & Breakfast was actually the filming location for both exterior and interior shots in 1989’s Indiana Jones and the Last Crusade, playing the role of the home where a young Indy (played by the late River Phoenix) lives with his father, Henry Jones (Sean Connery).

Today, owners of the B&B are using the house’s connection to the classic film as part of the experience and dedicating themselves to preserving its history. Find details like a re-creation of the “Jones” mailbox outside and the inside decorated with Indy memorabilia including a shrine to Sean Connery above the fireplace.

Young Indy’s home, as it appears in Indiana Jones and the Last Crusade. Image ©Disney/Lucasfilm

Ye come seeking adventure and salty pirates, eh? Well, look no further than the island of Saint Vincent in the Caribbean Sea. The island was home to a number of filming locations for 2004’s Pirates of the Caribbean: The Curse of the Black Pearl, but the one that intrigues us most is here at Wallilabou Anchorage. The waterfront of this small hotel in Wallilabou Bay is where we first met Captain Jack Sparrow as he famously stepped off the mast of the nearly sunken Jolly Mon and on to the pier. In fact, the surrounding area was used for a number of scenes, playing the role of the bustling town of Port Royal.

During your stay, definitely check out the village set which is still littered with screen-used props and memorabilia. Don’t forget to pop into the hotel’s restaurant/bar where you’ll find the actual Jolly Mon mast prop, now permanently embedded into the floor with concrete. If you can’t wait to get there in real life, you can catch a sneak peek by watching episode 4 of the Disney+ series Prop Culture, as the hotel is featured, though not called out by name. 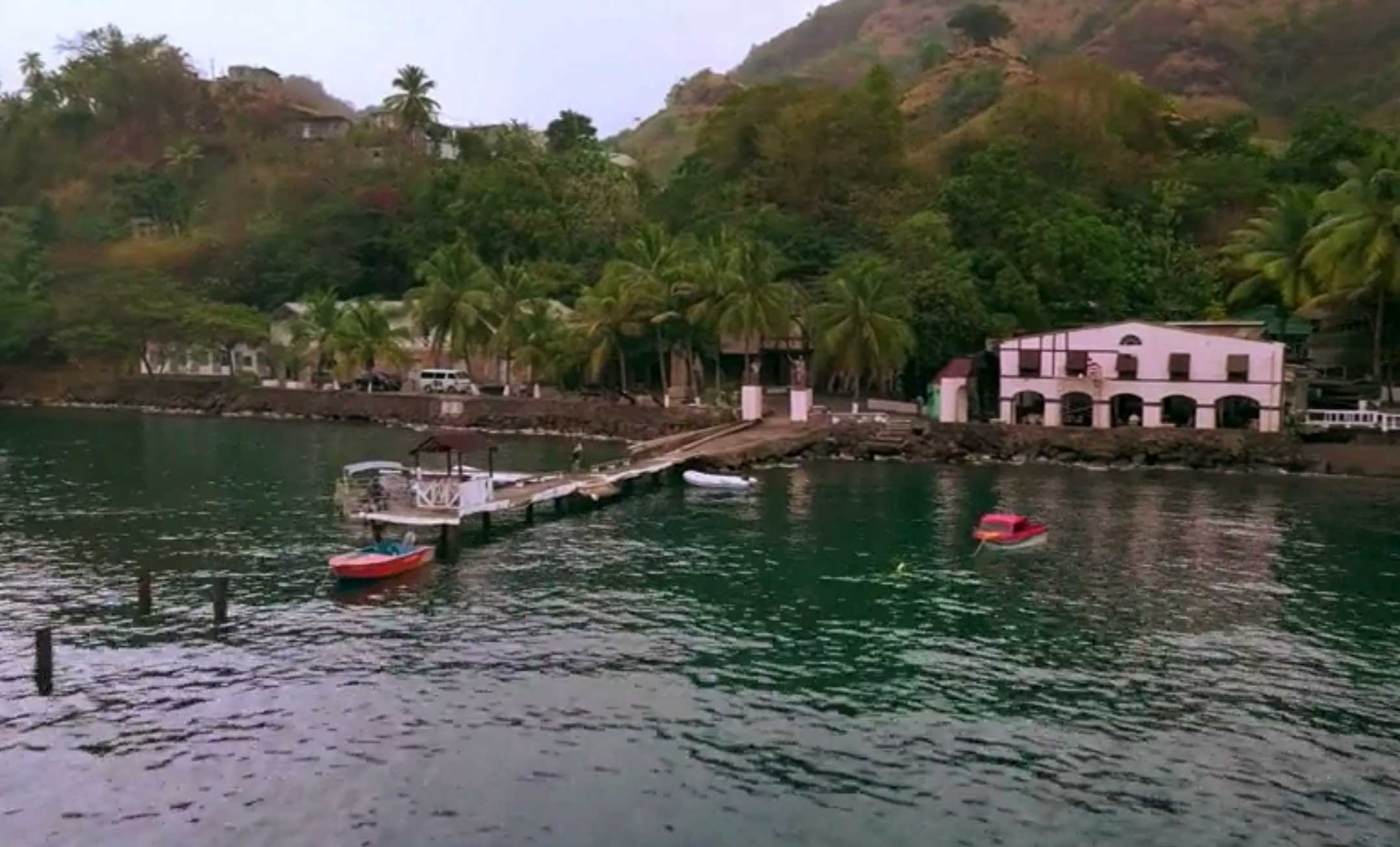 A look at the former movie set at Wallilabou Anchorage, as seen in Prop Culture. Image ©Disney

We’d remiss not to include a place that was so dear to Walt’s heart – a place he loved visiting so much that you could often find him sporting this place’s “STR” logo embroidered or tacked on to his tie (check it out on the Partners statue and on Tom Hanks in 2013’s Saving Mr. Banks). Walt was a member of Smoke Tree Ranch and in 1948 built his first house within this gated community in beautiful Palm Springs, California.

If you want to visit the ranch, you’ll have to book a room – choose from an array of cottages, including several designed by Disney Studios in the 1960s, that can be rented starting from $410 per night. 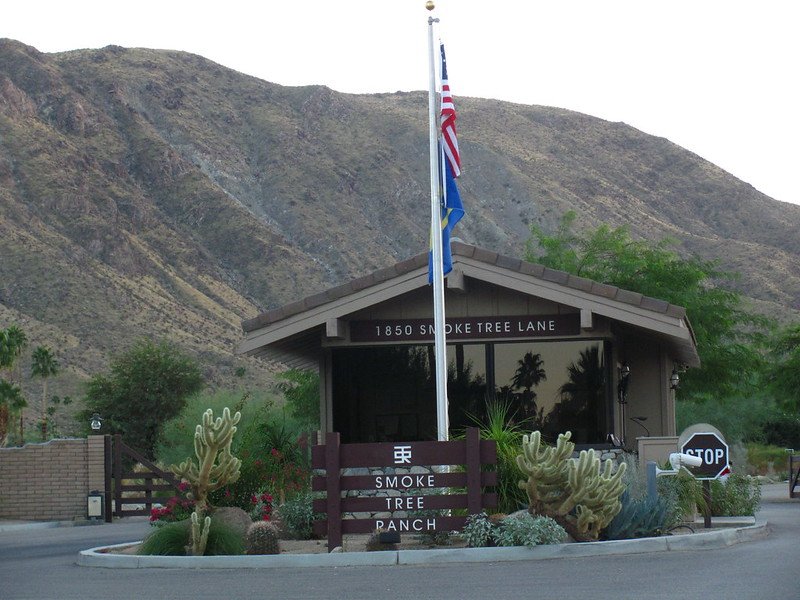 The entrance to Smoke tree Ranch. Photo by Loren Javier on Flickr

Once the home of a wealthy family, The Harry Packer Mansion is a historic building in beautiful Jim Thorpe, Pennsylvania, that has since been converted into a 12-bedroom Inn. If you can’t tell by the building’s creepy looking Dutch Gothic and Victorian-style design elements, this 1874 structure was the main inspiration for the facade of Walt Disney World’s Haunted Mansion as well as its clone in Tokyo Disneyland.

Now known as the “murder mansion“, the Harry Packer house hosts Victorian era “Murder Mystery” events on the weekends. If you’d rather something a little tamer, you can just choose to stay the night or just visit for a day trip. 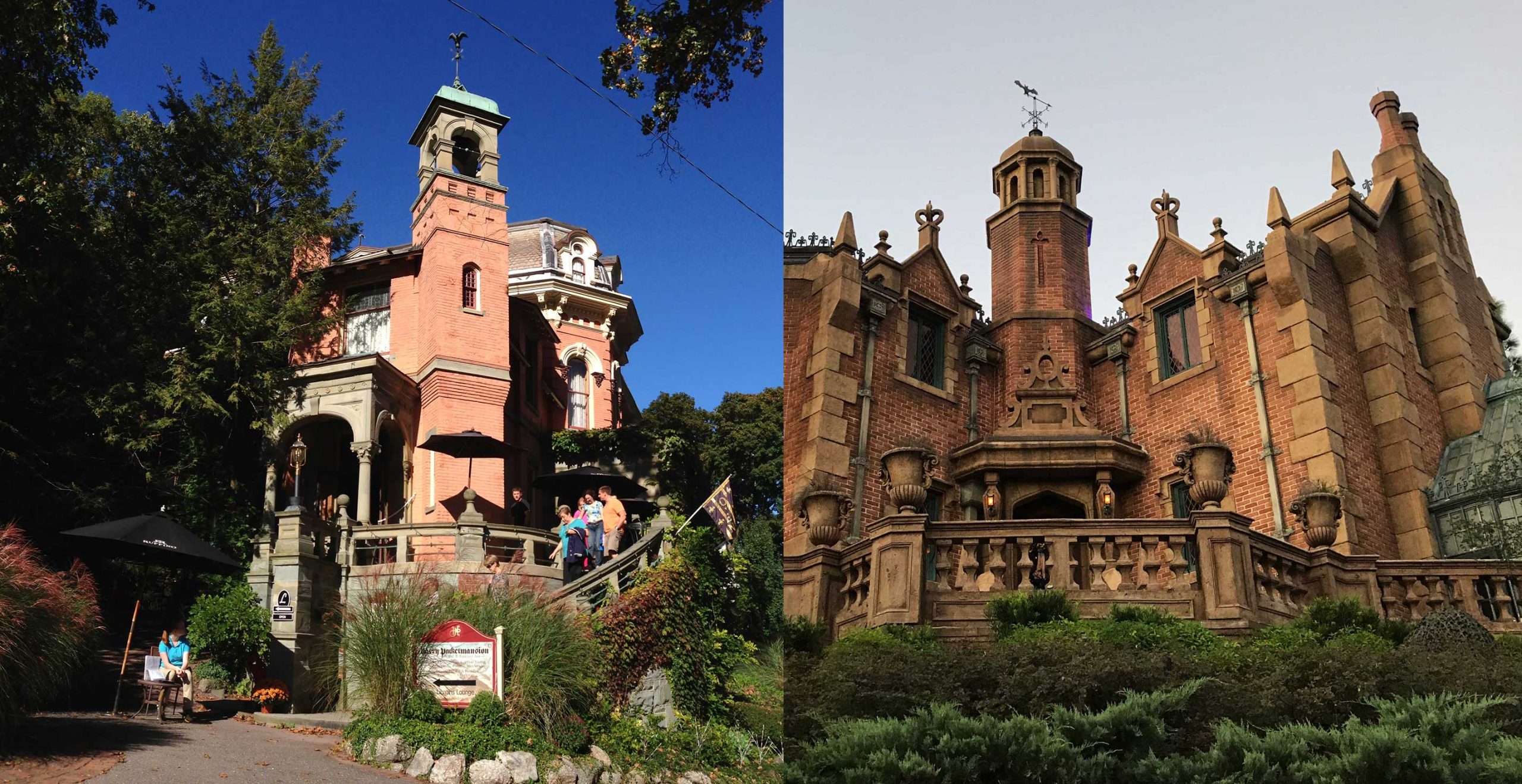 The last item on our list is our favorite. It’s actually another Disney related place that might also be haunted… 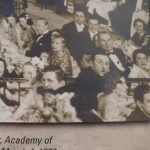 The Millennium Biltmore Hotel is a 4-star hotel in downtown Los Angeles. Walt Disney visited here on at least one occasion that we know of: to attend the 9th Annual Academy Awards in 1937 where he accepted an Oscar for Best Short Subject Cartoon as the Producer of The Country Cousin. Find a photo of the ceremony crowd, including a “hidden Walt”, on an informational placard just outside the hotel’s South Olive Street entrance.

We’re not done though. Head on over to the Rendezvous Court, the hotel’s former lobby, for an eerie sight: the Moorish Revival style room was the inspiration for the lobby of the Hollywood Tower Hotel, better known as The Twilight Zone Tower of Terror!

A friendly word of warning, though (something you won’t find in any guidebook): don’t worry about avoiding the 13th floor here as the hotel only has 11, but, perhaps avoid those rickety maintenance service elevators on a stormy night or you may find yourself a permanent resident… of The Twilight Zone. 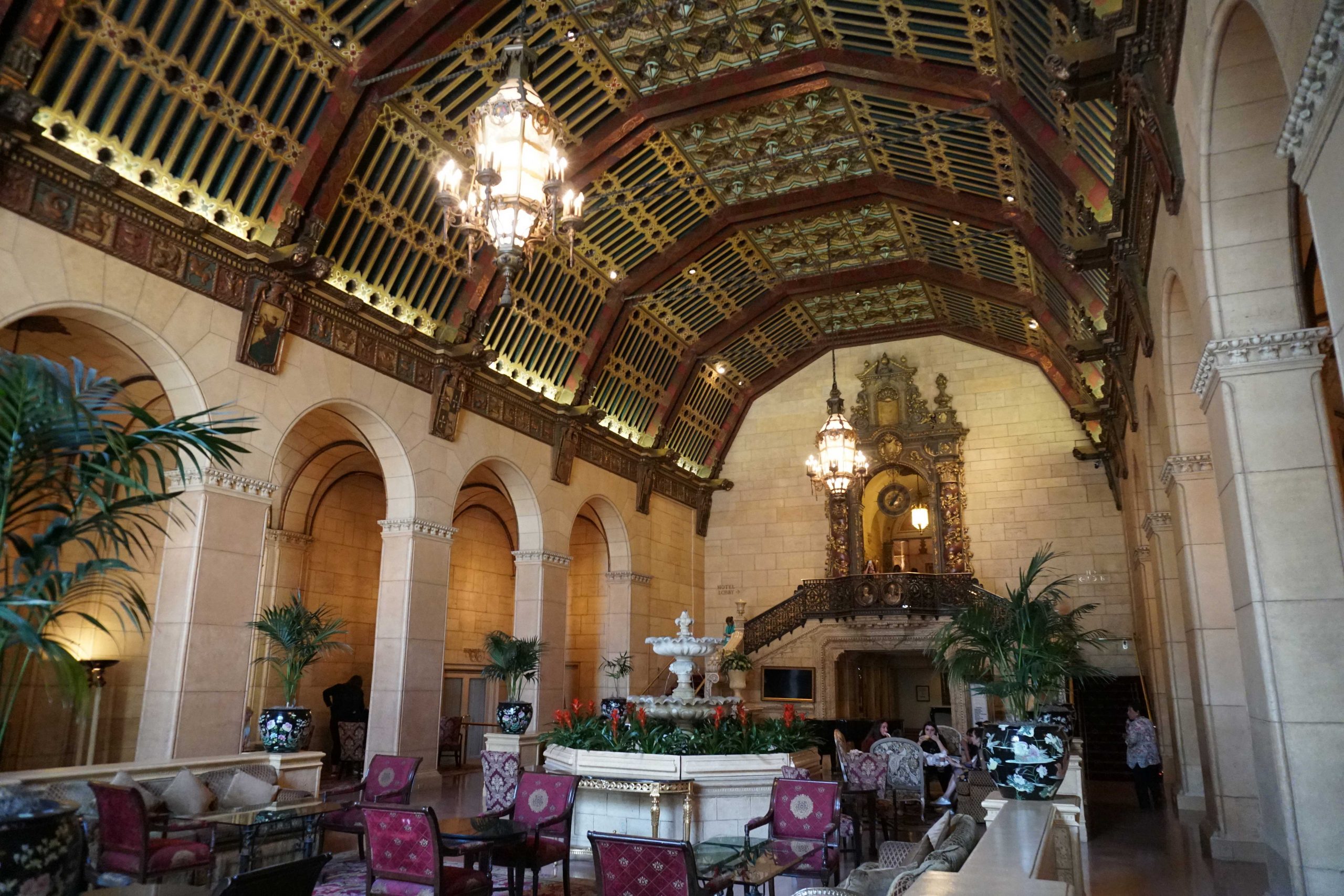 A warm welcome back to those of you who made it through this blog post. We want to hear from you – let us know which of these places you’d most want to spend the night and why! Leave us a comment below or contact us directly!