We all know about Hidden Mickeys – those three circles forming the head and ears of our favorite mouse. They’re all over the Disney Parks, have infiltrated pop culture, and have a ton of books written in their honor to help you find them. But did you know that Mickey isn’t the only Disney character in hiding? Countless other characters, besides being found in Disney and Pixar films, are concealed in our favorite theme parks across the globe!

The following is a list of the best non-Mickey characters hidden in Disney Parks around the world. We rank them based on their “cool factor” and provide you with a bit about their backstory so you can fully understand and appreciate why we love each one.

10. The Darling parents at City Hall

Disneyland goers may have passed by this sign posted outside City Hall and perhaps chuckled that it asks that “LOST PARENTS INQUIRE HERE FOR CHILDREN” instead of the other way around… but take a closer look at the couple portrayed in the drawing – it’s none other than George and Mary Darling, the parents of Wendy, John, and Michael, the stars of the 1953 classic animated film, Peter Pan. In a twist of irony, the Darling parents are the ones that are lost while their kids have gone and joined the Lost Boys! 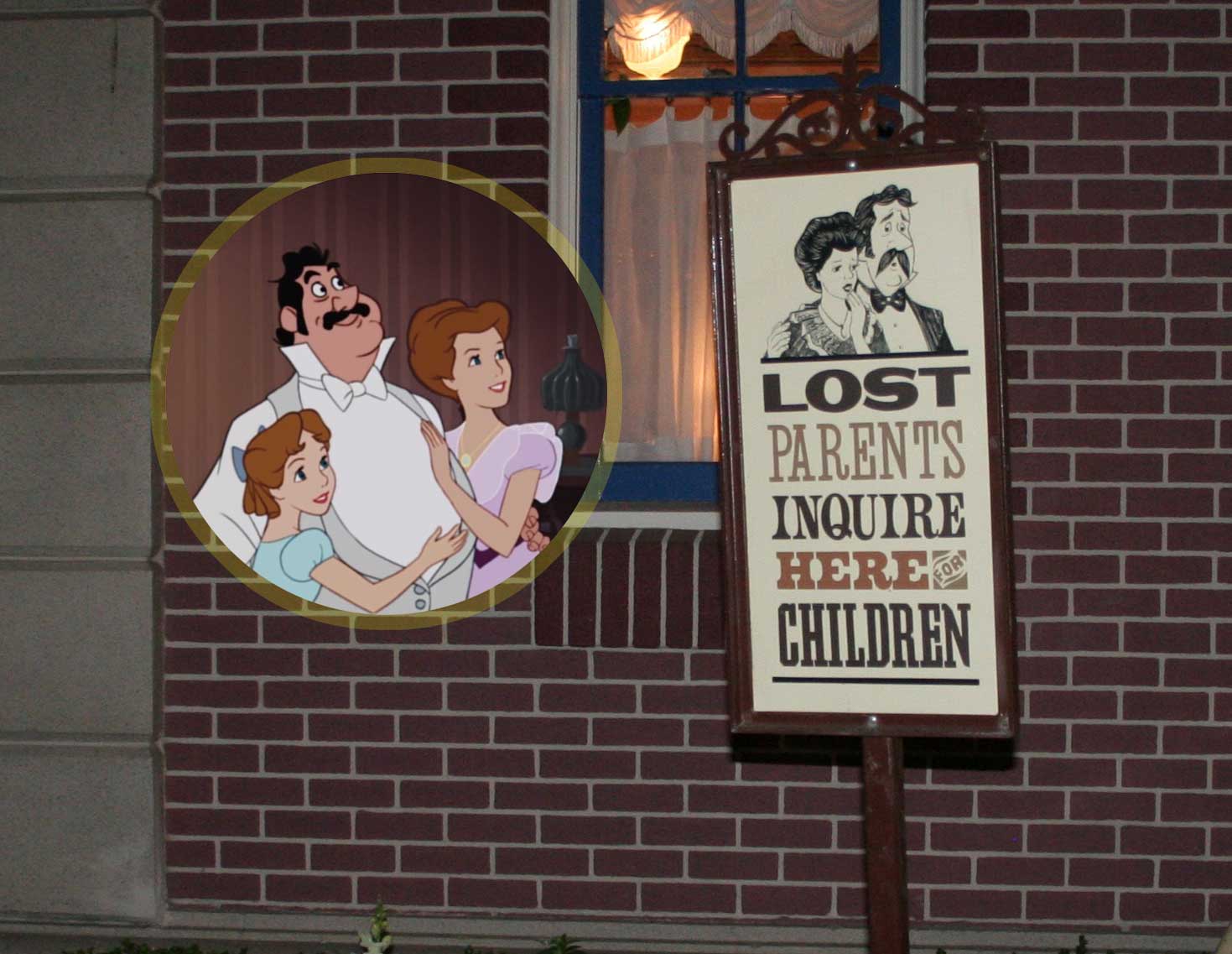 It’s a world of laughter a world of hidden characters…  head to Tokyo Disneyland’s version of “it’s a small world” to find a hidden Pinocchio in the finale scene in the form of a puppet being held by one of the dolls on the right side of the ride. We’re not exactly sure how or why the puppet ended up here but we were very happy to learn that it survived the 2018 refurbishment where a slew of new Disney characters were added to scenes along the ride, similar to the Disneyland and Hong Kong Disneyland versions – bringing the grand total number of Pinocchios in this ride to: two. 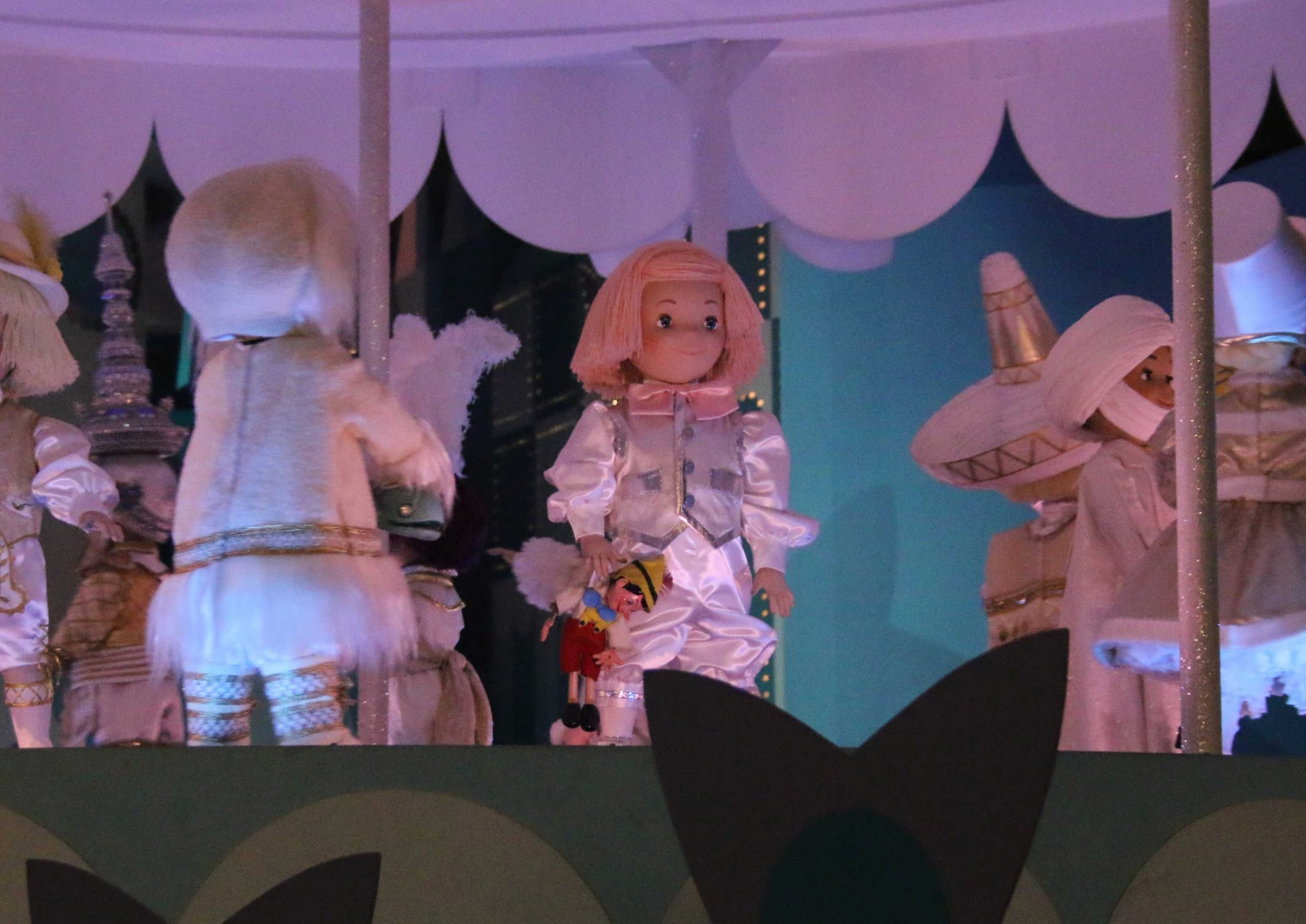 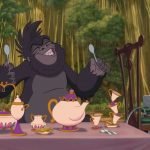 Mrs. Potts and Chip, the teapot and her offspring cup(?!) from 1991’s Beauty and the Beast, make an appearance in Disneyland’s Tarzan’s Treehouse. They appear in this walk-through attraction in the form of their non-personified selves (AKA missing their eyes and mouths) in the treehouse camp’s kitchen.

We especially love these hidden characters because it’s not just an if-you-know-you-know type of thing – they’re actually paying homage to the porcelain character’s cameos in the 1999 film Tarzan, during the Trashin’ the Camp scene. 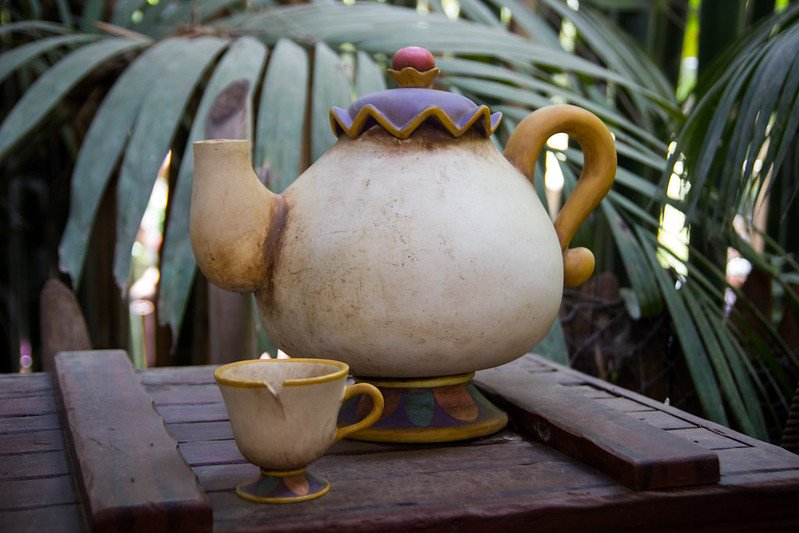 Potts and Chip in Tarzan’s Treehouse. Photo by Anna Fox on Flickr

Chip doesn’t just make an appearance in the Tarzan world, he (apparently) also exists in the LMU (Little Mermaid Universe). Sure, Ariel has gadgets and gizmos aplenty but did you know that she also has a teacup in her collection? Found camouflaged amongst the whozits and whatzits galore inside her playground in Tokyo DisneySea’s Mermaid Lagoon, Chip from 1991’s Beauty and the Beast sits atop a shelf in the room with the Prince Eric statue. 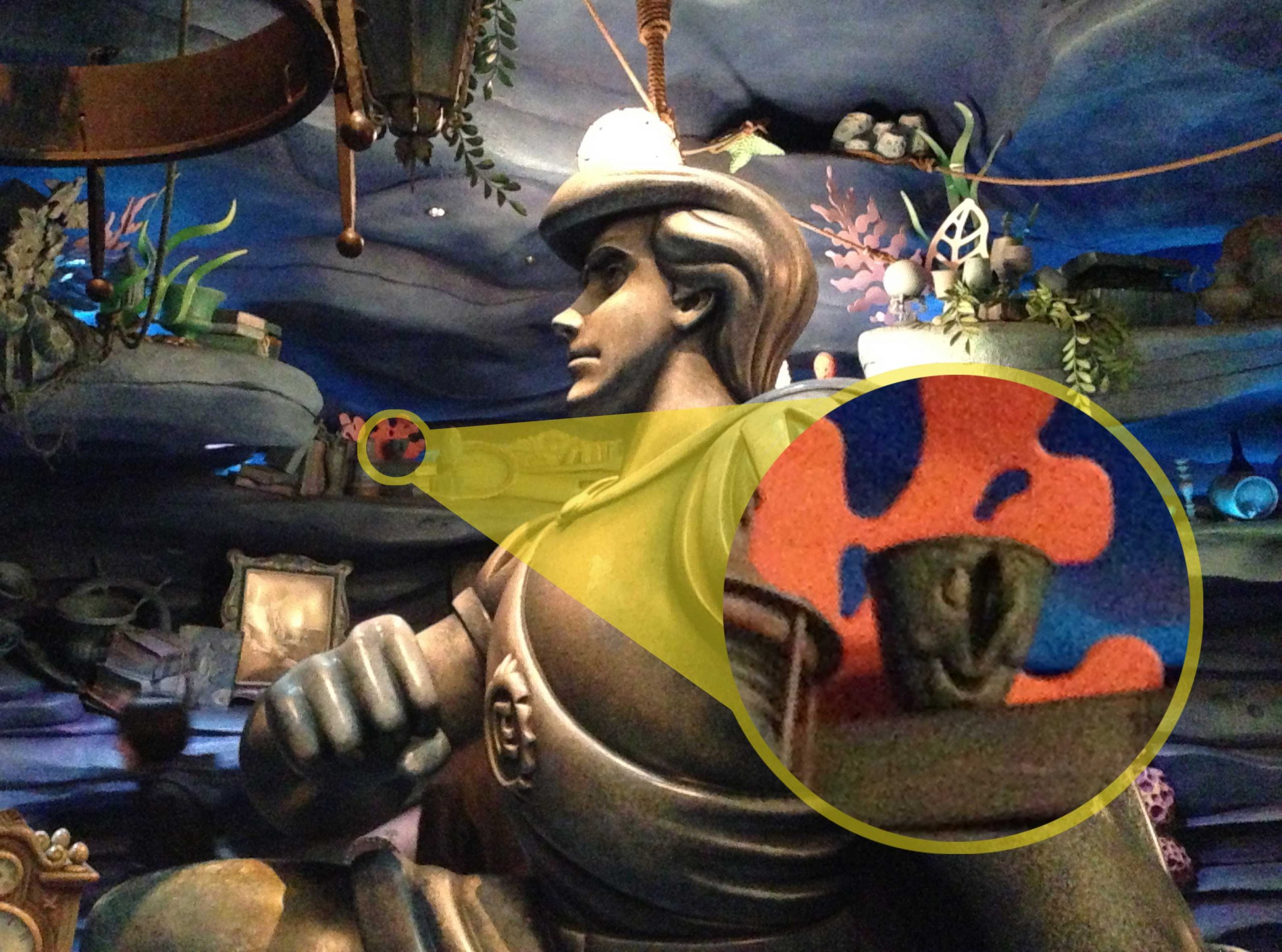 You want Chipamabobs? She’s got one!

6. Harold the Yeti in Guardians of the Galaxy – Mission: BREAKOUT!

Move over Disco Yeti, there’s an old Yeti in town. The original Disney Yeti made his debut in 1978 when Imagineers added three “Harold” animatronics to Disneyland’s Matterhorn Bobsleds in an effort to “plus” the 19-year-old ride’s storyline. Harold survived 37 years before he was replaced with newer figures in 2015 for Disneyland’s 60th anniversary.

The original animatronic figures were thought to have been gone forever, but when Guardians of the Galaxy – Mission: BREAKOUT! opened in Disney California Adventure in 2017, Disneyland purists were given a treat to see that one of the original Harolds made his way into the Tivan Collection! Find him cloaked among other artifacts in the room right before loading on to the ride’s gantry lift. He’s best seen from the queue on the upper level, but can easily be seen from the lower one as well. 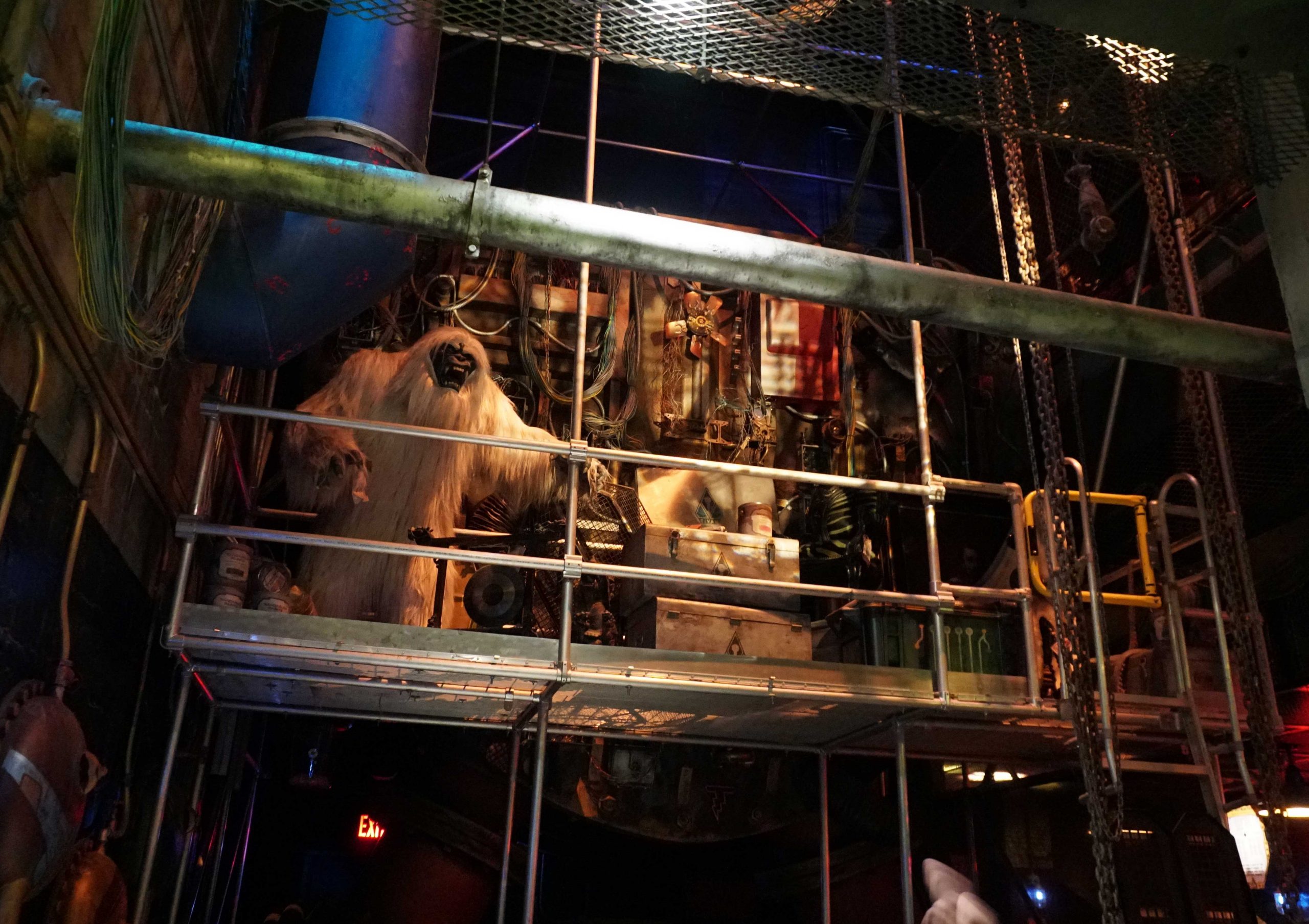 Let’s head to Disneyland’s Bengal Barbecue to find some fun S.E.A. references. When the dining area of this quick-service eatery was refurbished back in 2017, a slew of new easter eggs were added, including everyone’s favorite fez-wearing monkey: Albert from Hong Kong Disneyland’s Mystic Manor. 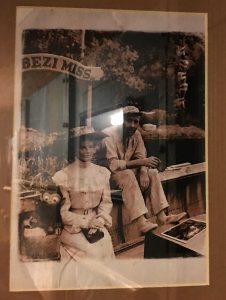 This framed photo is chock-full of easter eggs

Albert can be found in a framed photo on the back wall of the establishment. The fun doesn’t stop there, though. He’s sitting beside Charlie and Rose, Humphrey Bogart and Katharine Hepburn’s characters from the 1951 film The African Queen. Though the film wasn’t Disney’s, it’s been frequently associated with Disneyland’s Jungle Cruise attraction as Imagineer Harper Goff referenced elements from it during the ride’s development.

The framed photo has a few more easter eggs, too: the name of the boat they’re on is Zambezi Miss (one of The Jungle Cruise boats), you can see the ride’s infamous rhino scene behind them, and a photograph of Dr. Albert Falls sits on the surface in front of them. We’re not sure how the monkey Albert ended up here or how this all ties into S.E.A. lure but we’re happy to see these obscure details hidden in the Parks.

4. The Emperor of China in Mickey & Minnie’s Runaway Railway

When Mickey & Minnie’s Runaway Railway opened earlier in 2020, we were thrilled to find a bunch of new Hidden Mickeys and fun Disney references scattered about the cartoon world of modern Mickey Mouse shorts. Most people were too distracted by the Mickeys to notice that another Disney character snuck into the decor: The Emperor of China from the 1998 animated classic Mulan. Find the wise Chinese leader cloaked among the ornately decorated lobby ceiling of the replicated TCL Chinese Theatre.

The Emperor sits solemnly on the Chinese Theatre’s ceiling

3. The Watcher Informant in the Iron Man Experience

Stan Lee, one of the most prolific comic book writers of our time found a second life making cameos in the Marvel Cinematic Universe films. Finally revealed as an informant for The Watchers in 2017’s Guardians of the Galaxy Vol. 2, Stan Lee makes another cameo that you might not have seen unless you’ve been on Hong Kong Disneyland’s Iron Man Experience. The Watcher Informant appears as a Stark Expo attendee in the ride’s pre-show safety video. Without spoiling too much of the video (though if you want, you can find it on YouTube) let’s just say that this Marvel star as an adorable interaction with his fellow superhero admirer. 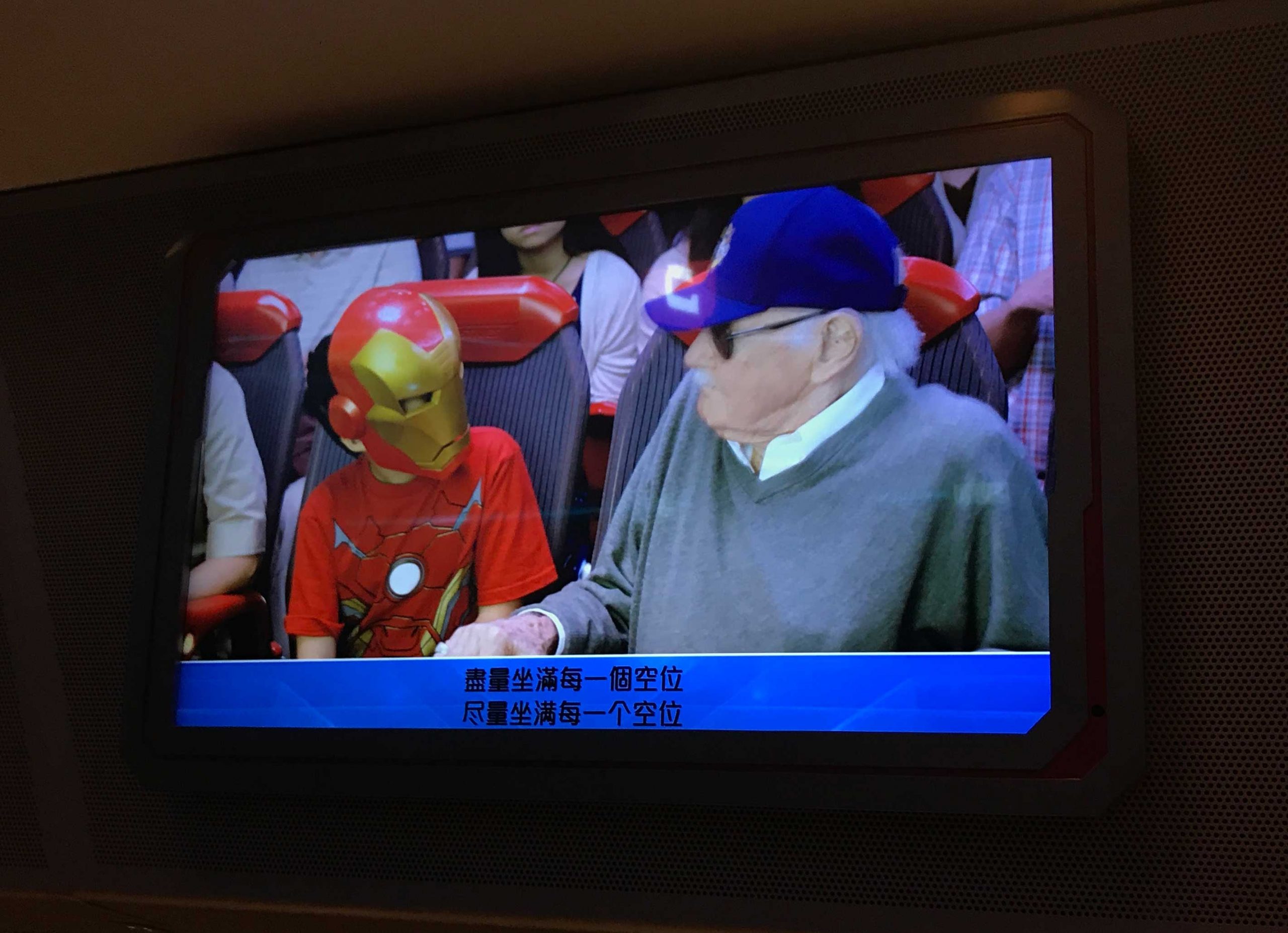 If you do ever get to ride this one, be sure to also check out the unique design of the penny-press machine immediately after exiting the ride building 😉 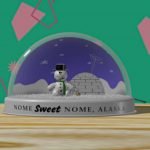 The snow globe as seen in Knick Knack. Image ©Disney/Pixar

The 1989 short film, Knick Knack was one of Pixar’s early attempts into the experimental world of computer-animated storytelling. The film follows Knick, a snowman feverishly trying to escape his snow globe in order to party with a collection of fellow travel keepsakes.

Knick makes his real-life appearance in Radiator Springs Curios, the shop in Disney California Adventure’s Cars Land modeled after the one found in Pixar’s Cars films. As you walk into the shop, take a look at the top shelf of the far wall and you’ll find the “Nome Sweet Nome” snow globe from Knick Knack. Though it doesn’t look exactly like the one in the short film, we love that this obscure Pixar character makes an easter egg appearance in the real world. 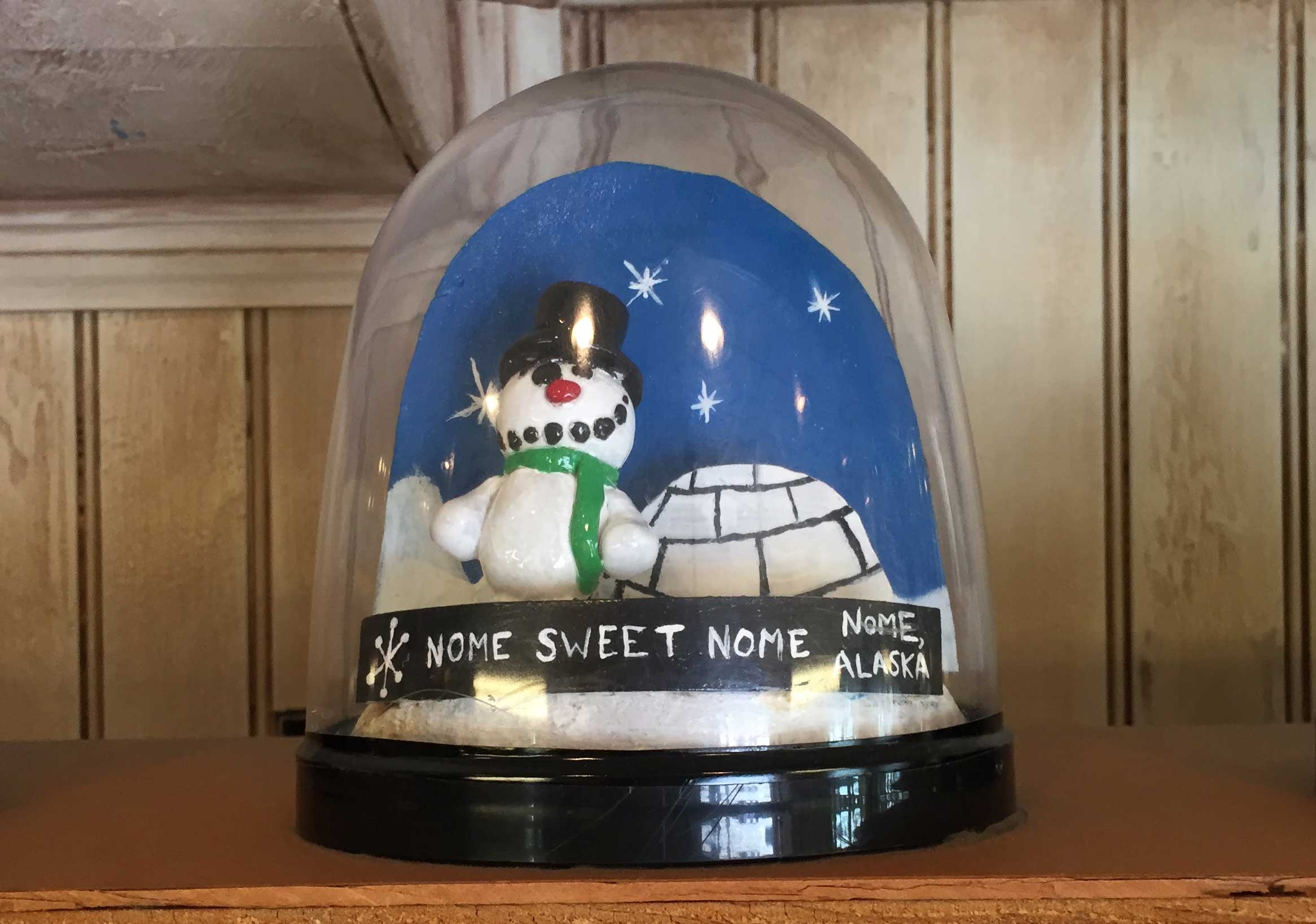 1. Mr. Toad in The Many Adventures of Winnie the Pooh

Mr. Toad’s Wild Ride was an opening day attraction in both Disneyland and Walt Disney World. When the powers that be decided to close the Walt Disney World version in 1998 in favor of a Winnie the Pooh makeover, fans were understandably outraged. The eviction of J. Thaddeus Toad from the Magic Kingdom actually came with a small group of protests (thank goodness Facebook didn’t exist back then).

Today, over 20 years later, The Many Adventures of Winnie the Pooh is a classic attraction in its own right, with similar versions spawned in all other Disney Parks around the world. But it’s not without honoring the dapper amphibian who paved the way for the pantless bear: The next time you ride Magic Kingdom’s version of Pooh, take a look on the far left-hand wall right after busting through Owl’s treehouse and you’ll find photo evidence of Mr. Toad willfully handing Owl the deed to the building that was once his. Nearby, you’ll also find a similar picture of Moley (Mr. Toad’s sidekick) greeting Pooh. 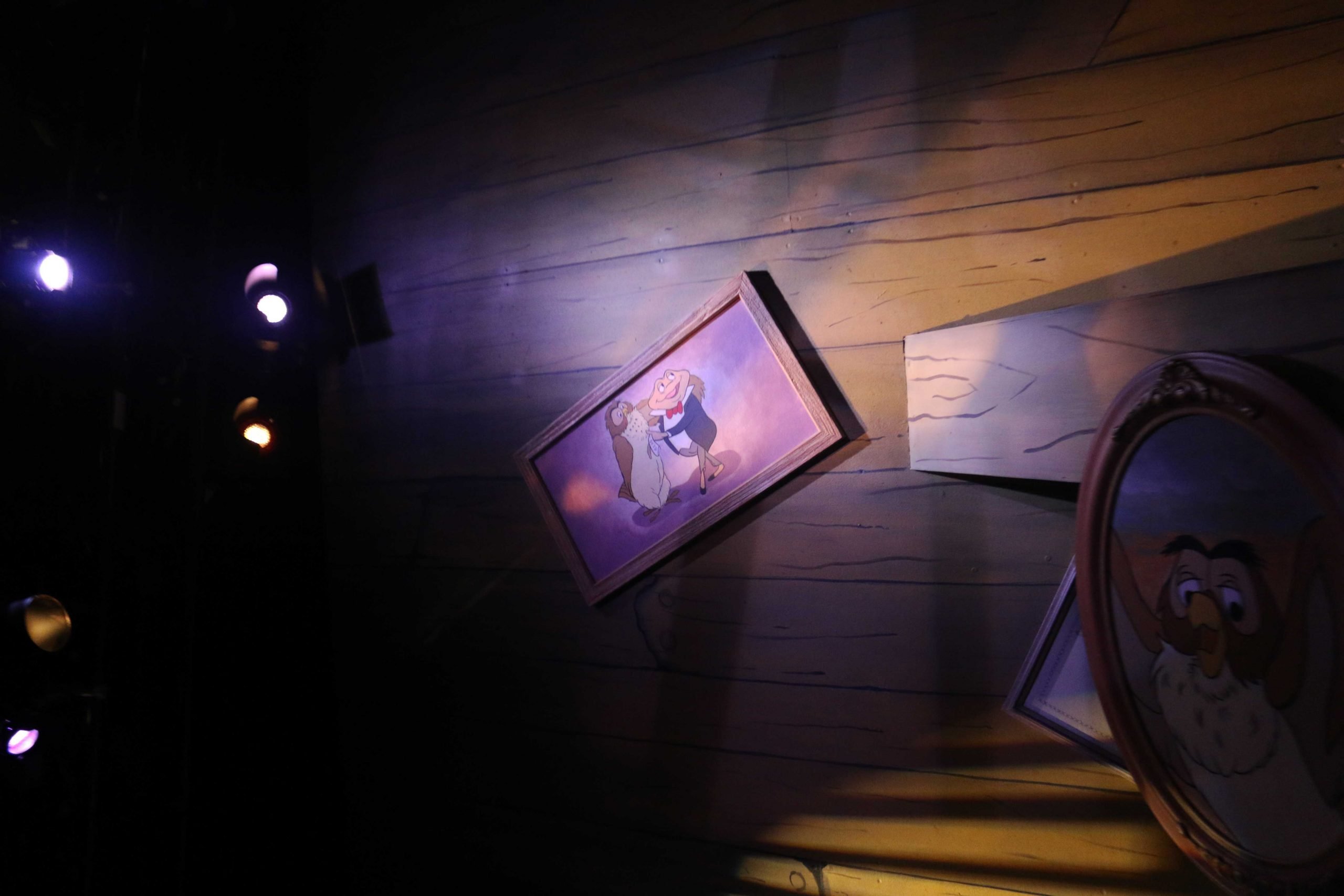 These subtle tributes and hidden treasures are what we truly love about the Disney Parks. Hidden Mickeys are great and all, but finding random and sometimes obscure characters pop up in unexpected places is what keeps us coming back for more!

Did you know about all of these Disney Park easter eggs? Which one was your favorite? Do you know about any more secrets like these hidden around the Parks? Let us know in the comments below or send us a note using our contact form!