When Walt Disney was ideating Disneyland, he wanted to build a special place where families can come to enjoy a day together. The centerpiece of that place would be a storybook castle, and the introduction to that place would be a walk through nostalgia: a turn-of-the-century Main Street, U.S.A. 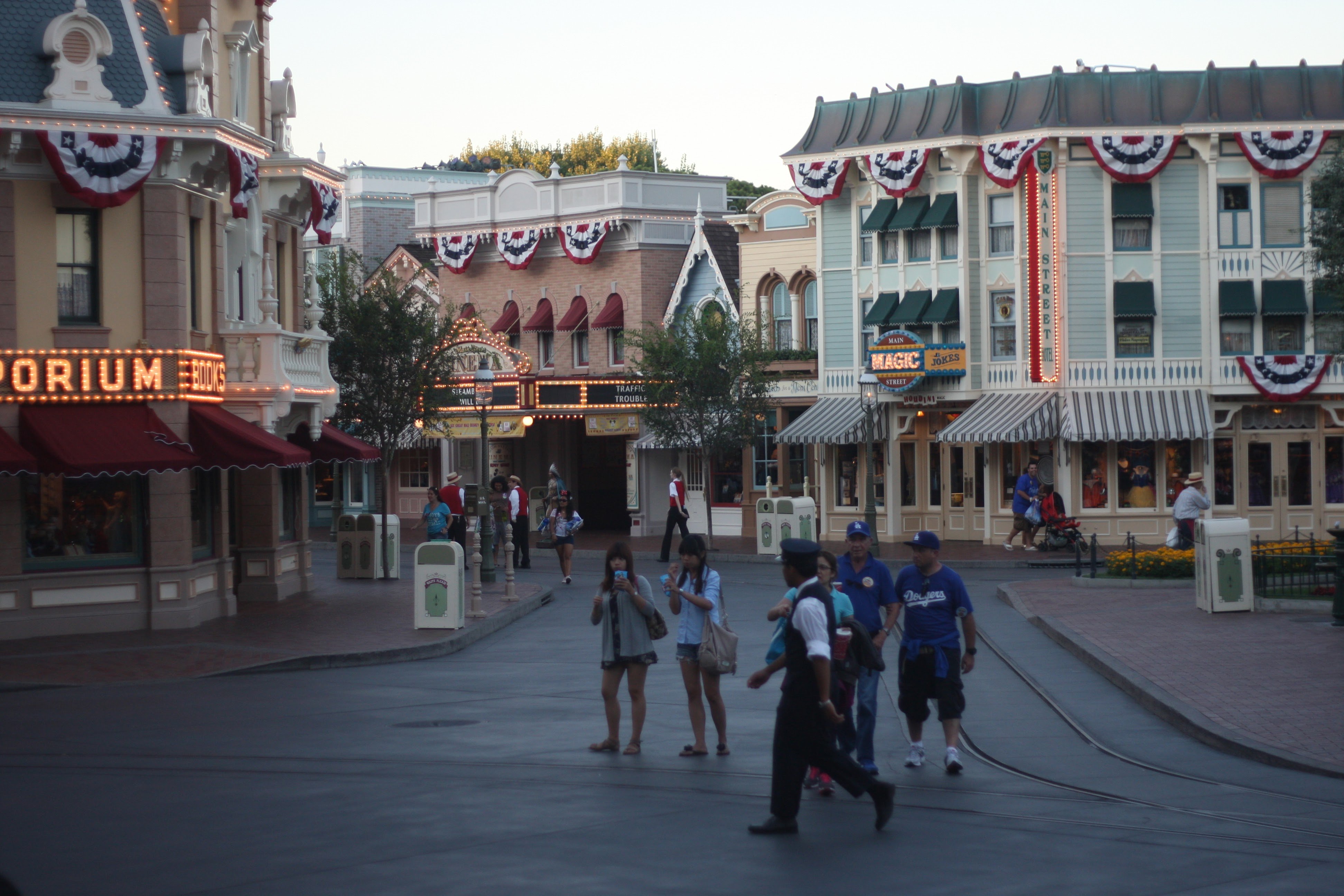 A look at Main Street, U.S.A. in Disneyland Park

Walt envisioned Main Street in the vein of his own hometown of Marceline, MO but delegated the nuts and bolts of the design to his newest and most talented designer, Harper Goff. Having grown up in Fort Collins, Colorado, Goff took Walt’s vision and made it his own.

When I started working on Main Street, I had photographs of Fort Collins taken. I showed them to Walt and he liked them very much.
– Harper Goff

Today, many of the original buildings that Goff grew up with are still standing, and the trip up to this city (an hour north of Denver) is worth the price of the rental car. Its small-town charm and friendly inhabitants will leave you wondering why you don’t live there yourself.

We start our tour just south of the town’s main drag on South Howes Street. This is the street where Harper Goff’s childhood home still stands. Goff lived here with his family from his birth in 1911 until they moved to California in 1920. Many of the houses here were built at the very end of the nineteenth century and it seems the residents here are proud of their roots and work hard to maintain their homes original exterior. 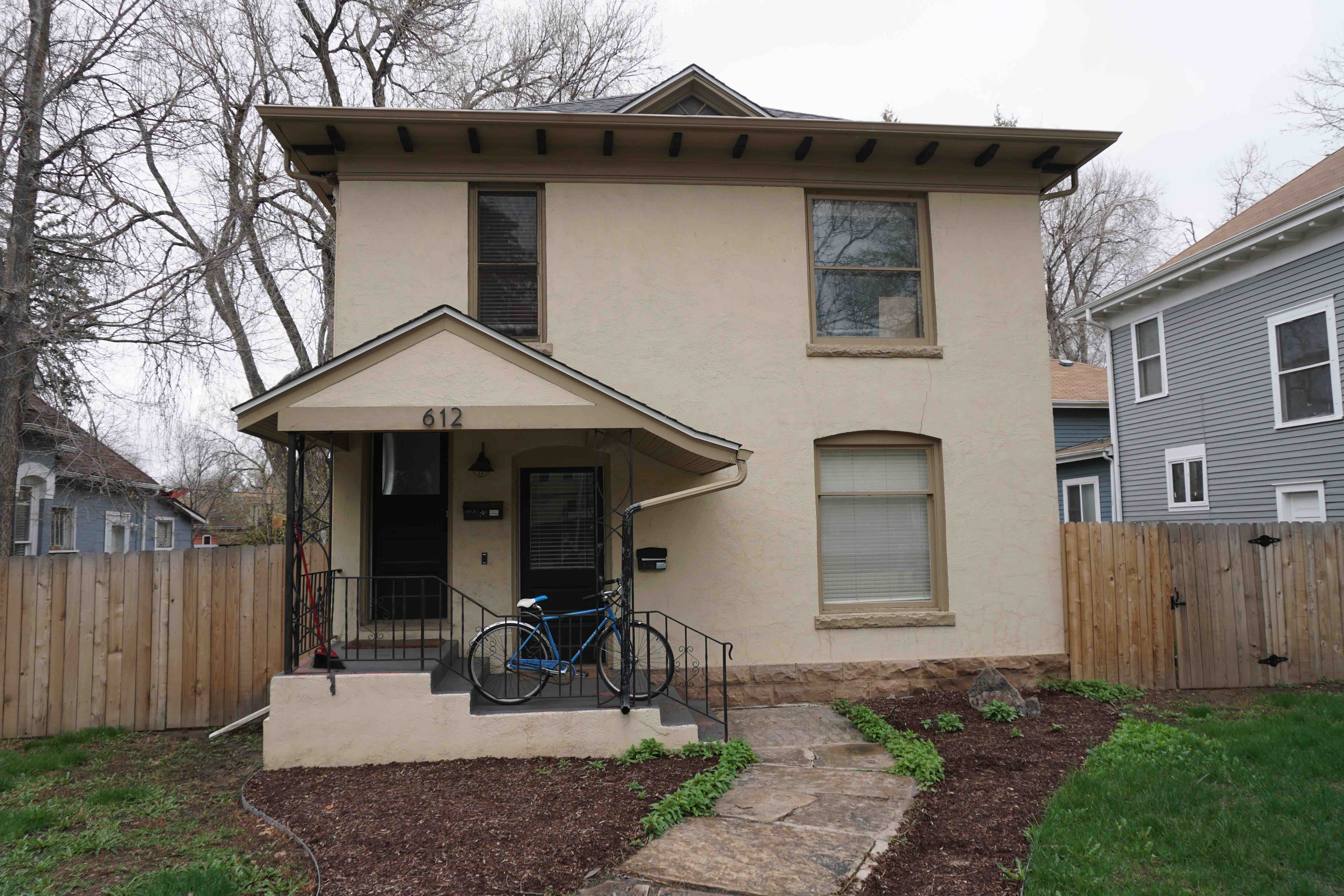 If you’re planning to take this tour yourself following our guide, I’d suggest parking somewhere in this neighborhood and continue on foot, just as Goff would have done in his formative years. Parking downtown isn’t particularly difficult, but most free spots have a two-hour limit.

Goff’s home is just a mile from the Old Town and you should have great weather along the way as the Denver area boasts 300+ days of sunshine per year. Unfortunately, we visited during a rare and rather cloudy weekend, but we didn’t let that stop us from exploring. As you walk, admire the American flags and white picket fences that line the streets here, a true representation of Americana that Walt would admire. 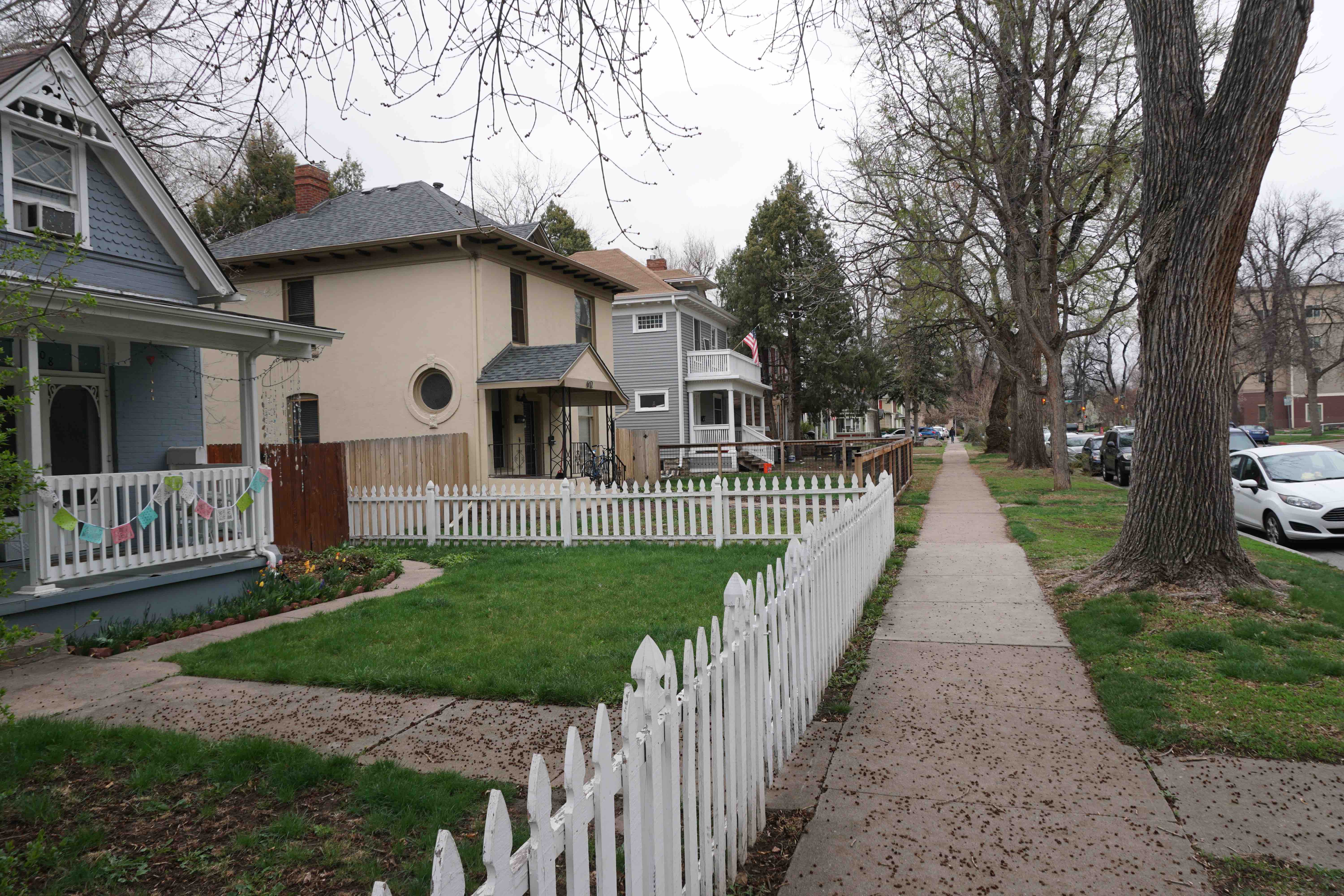 A look down South Howes Street in Fort Collins, CO. Goff’s childhood home is the beige one with the circular window

Along the way, we also pass a number of great, locally owned, restaurants on both South Mason Street and South College Avenue. Although chains appear here and there, it’s nice seeing this community really embrace and support local businesses. We had an incredible lunch at The Gold Leaf Collective, not too far from the Goff house.

As you cross over North Mountain Avenue on College, you’ll enter the Old Town Historic District, an area on the National Register of Historic Places since 1978. This is the start of the town’s real Main Street. Here you’ll enter a time warp from modern Fort Collins into buildings of historical character. Many of the buildings here bear digits representing the year they were built, consistent with the time period of Disneyland’s Main Street turn-of-the-century facade. 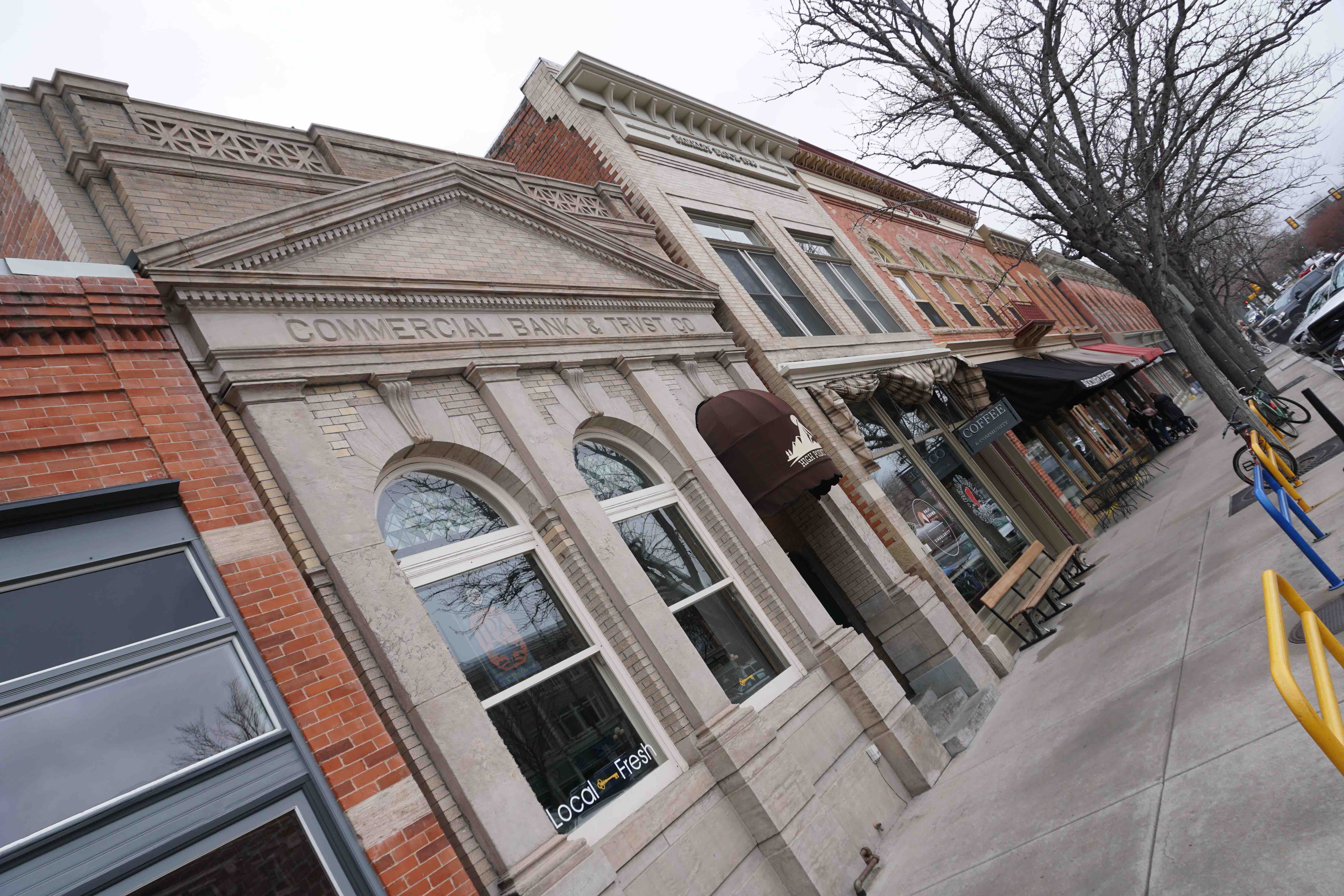 A look at the buildings along North College Avenue, many of which maintain their original late 1800’s facades. 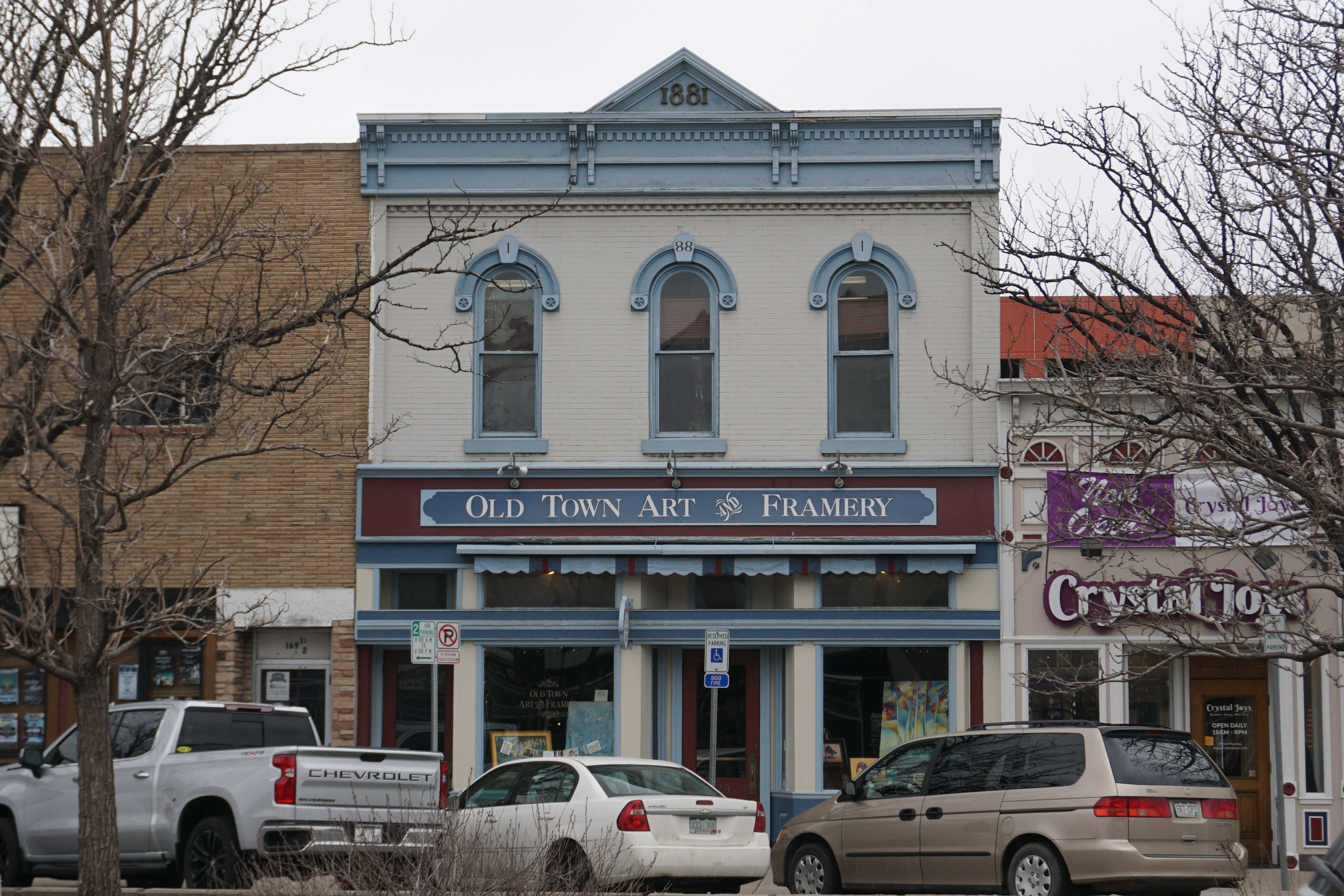 One of the ornate Victorian style buildings.

Along this street, you’ll find a number of shops and boutiques. WanderDisney points of interest (although really it’s just the name that’s related) include Kansas City Kitty (Walt lived in Kansas City during his teenage years) and Santa Fe Craftsman (In 1923 Walt boarded the Santa Fe, California Limited railroad to move out to LA). Cross the street and check out Rocket Fizz to grab an O-Zell Soda. If you’re in the mood for coffee, the Starbucks on the corner may remind you of Main Street Bakery, but we had an excellent experience at The Bean Cycle, an eclectic local coffee shop.

Make a right at the Starbucks and cross Walnut in the diagonal northeast direction, on to Pine Street. 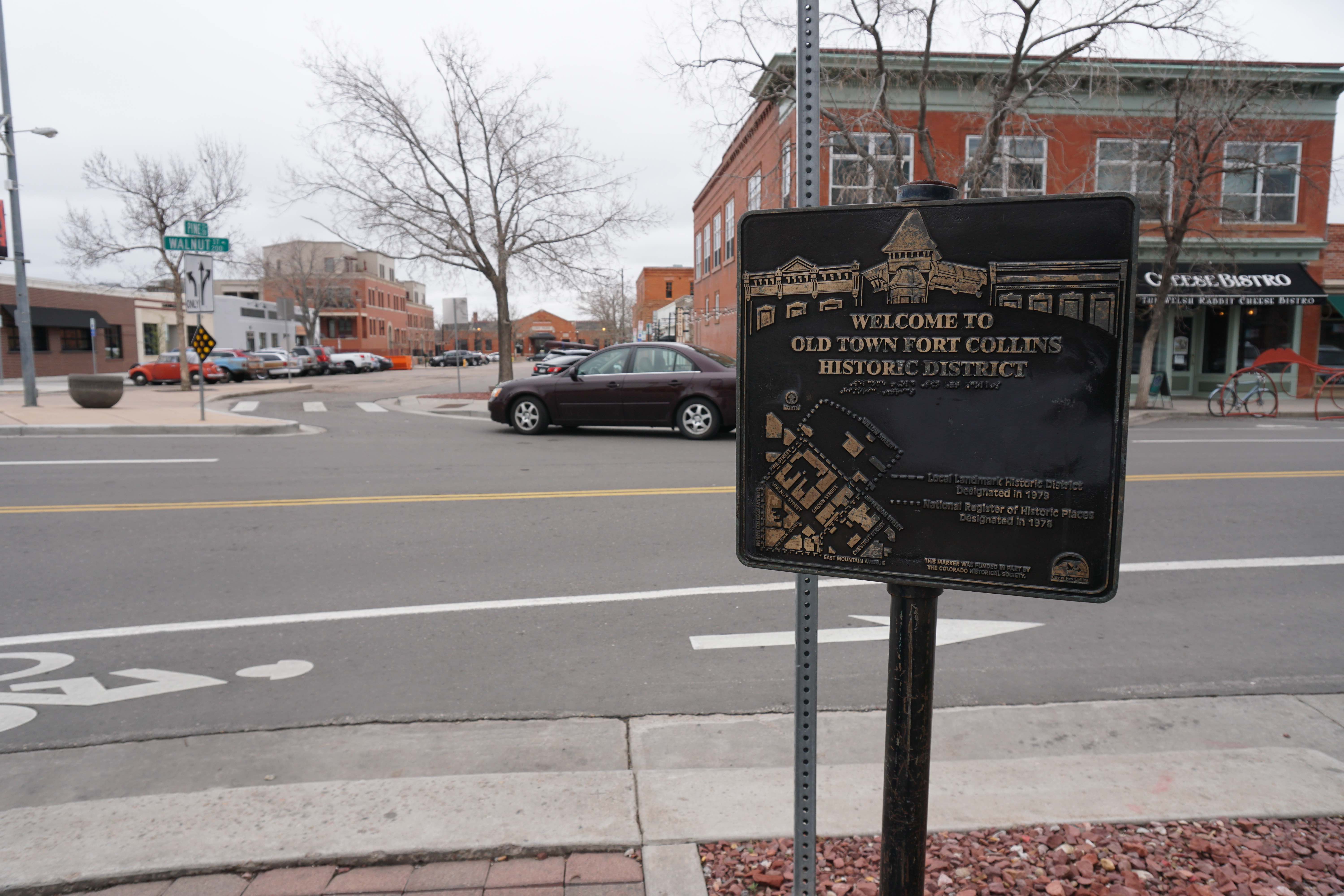 Looking straight ahead down Pine and you’ll find Rodizio Grill, now a Brazilian steakhouse but back in the time of Harper Goff, it was Fort Collins’ Union Pacific Railroad Station. The building’s structure and facade prove this and although it doesn’t resemble Disneyland’s Main Street Station, the fact that it’s the terminus of this street leads us to believe that it helped inspire the layout of Disneyland’s version at the end of Main Street, U.S.A.

The old Union Pacific Station at the end of Pine Street in Old Town, Fort Collins

A look down Main Street towards Disneyland’s Railroad Station 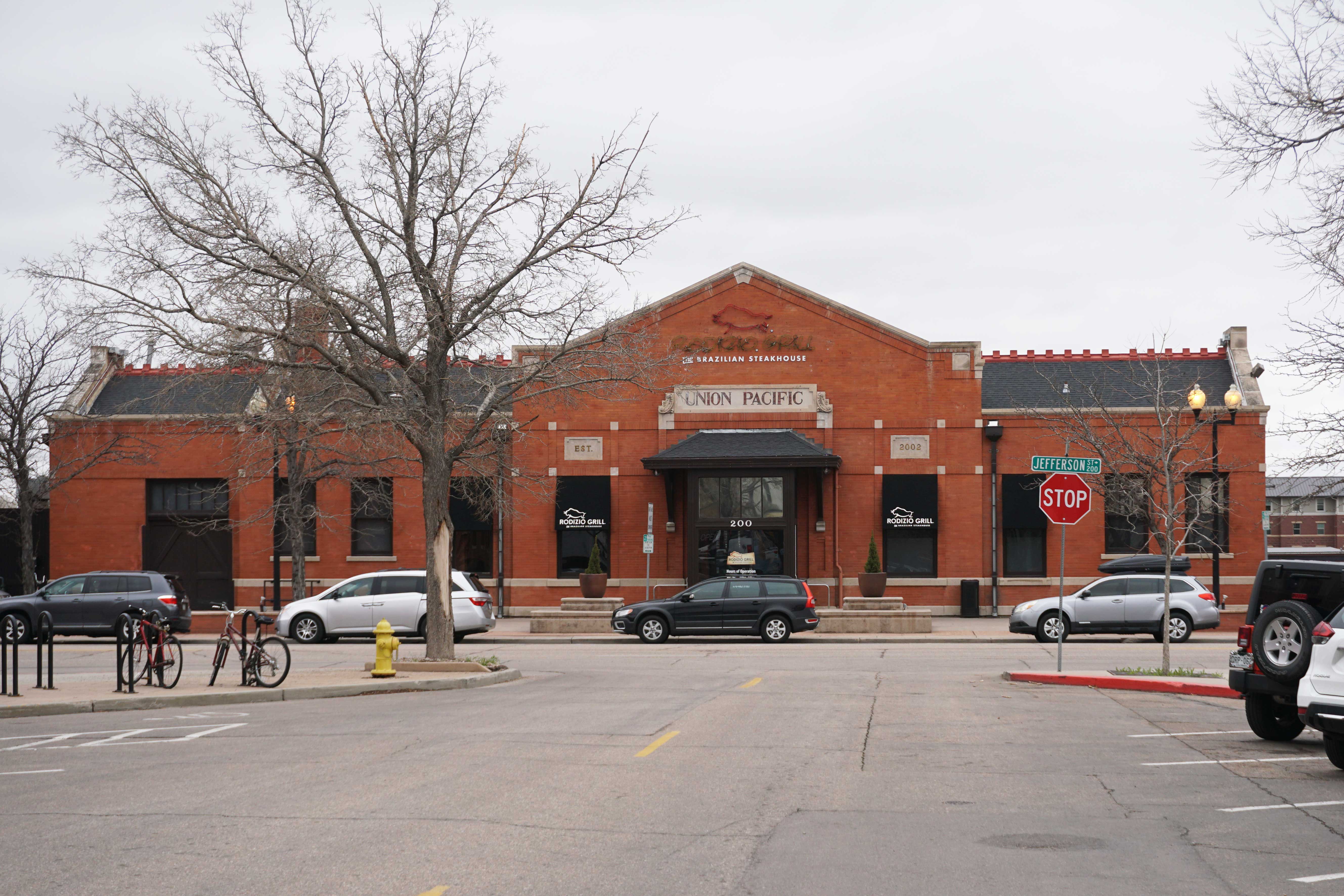 A close-up of the old Union Pacific station

An alleyway half-way down Pine was dedicated by the Fort Collins City Council in 2018 as Harper Goff Alley. Although the actual alley has nothing too exciting going on, the real draw here is a twenty foot tall mural of Goff by local artist Chris Bates. The mural was commissioned for the creation of The Exchange, a revitalized section of the Old Town. 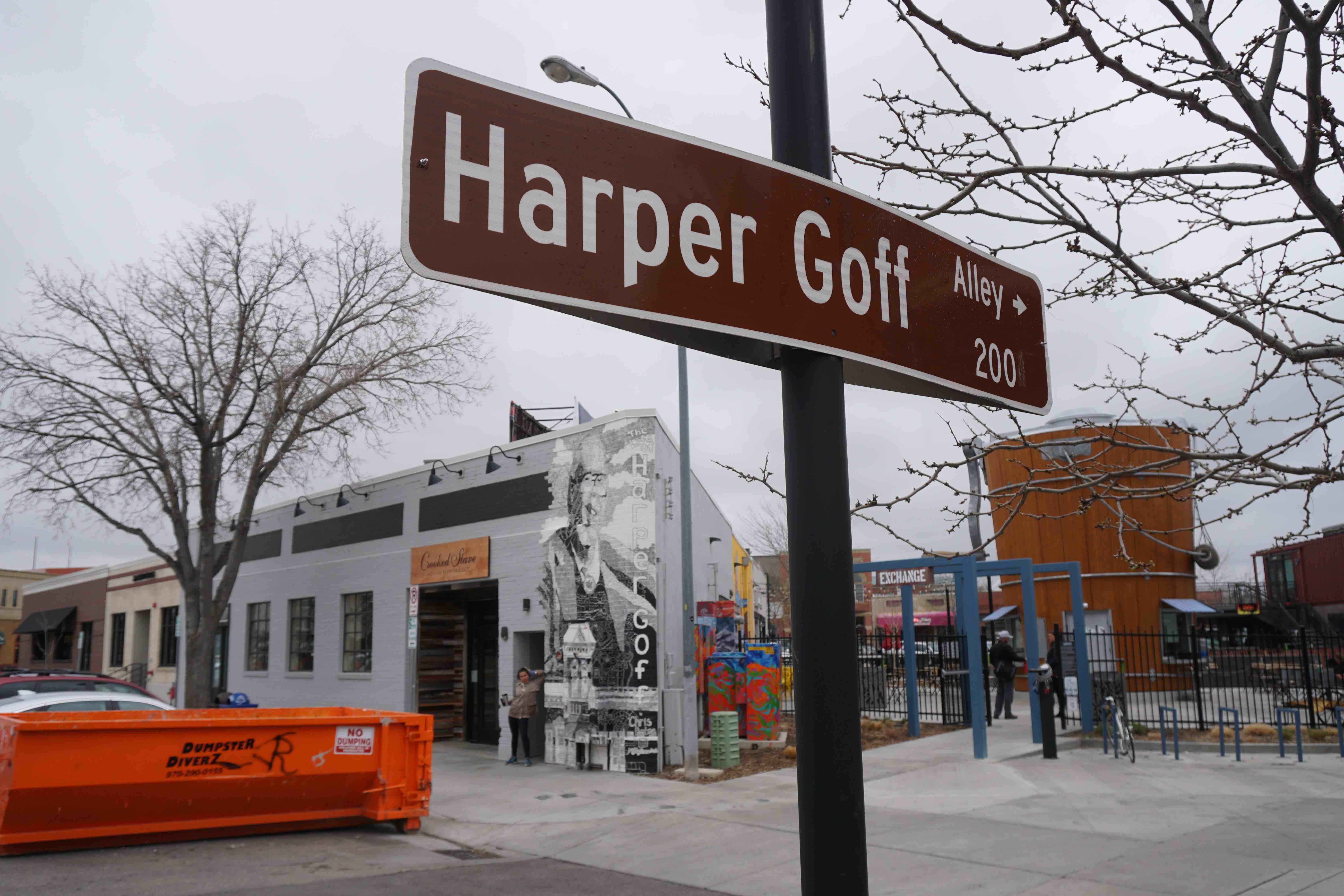 The mural is the entryway to Fort Collins’ “Harper Goff Alley” 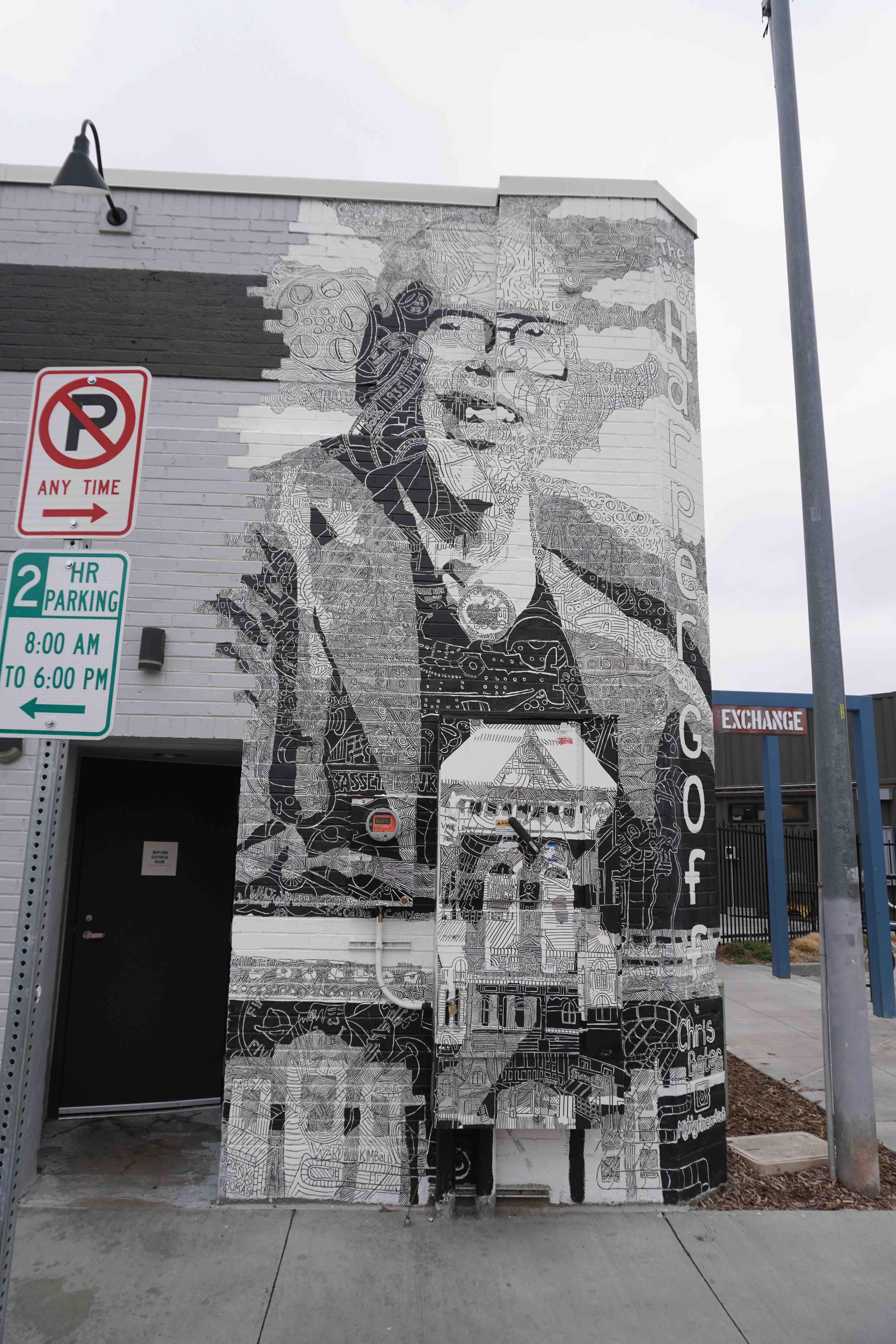 Here’s the mural in all of its glory

From afar, you can see a portrait of Goff above the old firehouse (coming up on our tour), but up-close, you realize that the mural is made up of doodles depicting key moments from Goff’s life such as the Nautilus from 20,000 Leagues Under the Sea. You can see some more photos of this impressive piece of street art on our WanderDisney location page by clicking here.

After taking in the Goff mural, check out The Exchange, a neat outdoor collective of restaurants and cafes. The Pizza Press has a location here; This chain always reminds me of Disneyland, as the first time I tried their pizza was at their location directly outside the main gate in Anaheim. They also have locations in the Disney designed town of Celebration and one just north of the Magic Kingdom in Winter Garden, Florida.

Make a right at Union Station, on to Jefferson. Here you’ll find a row of charming shops such as an olde-tyme candy store and a couple of art galleries. 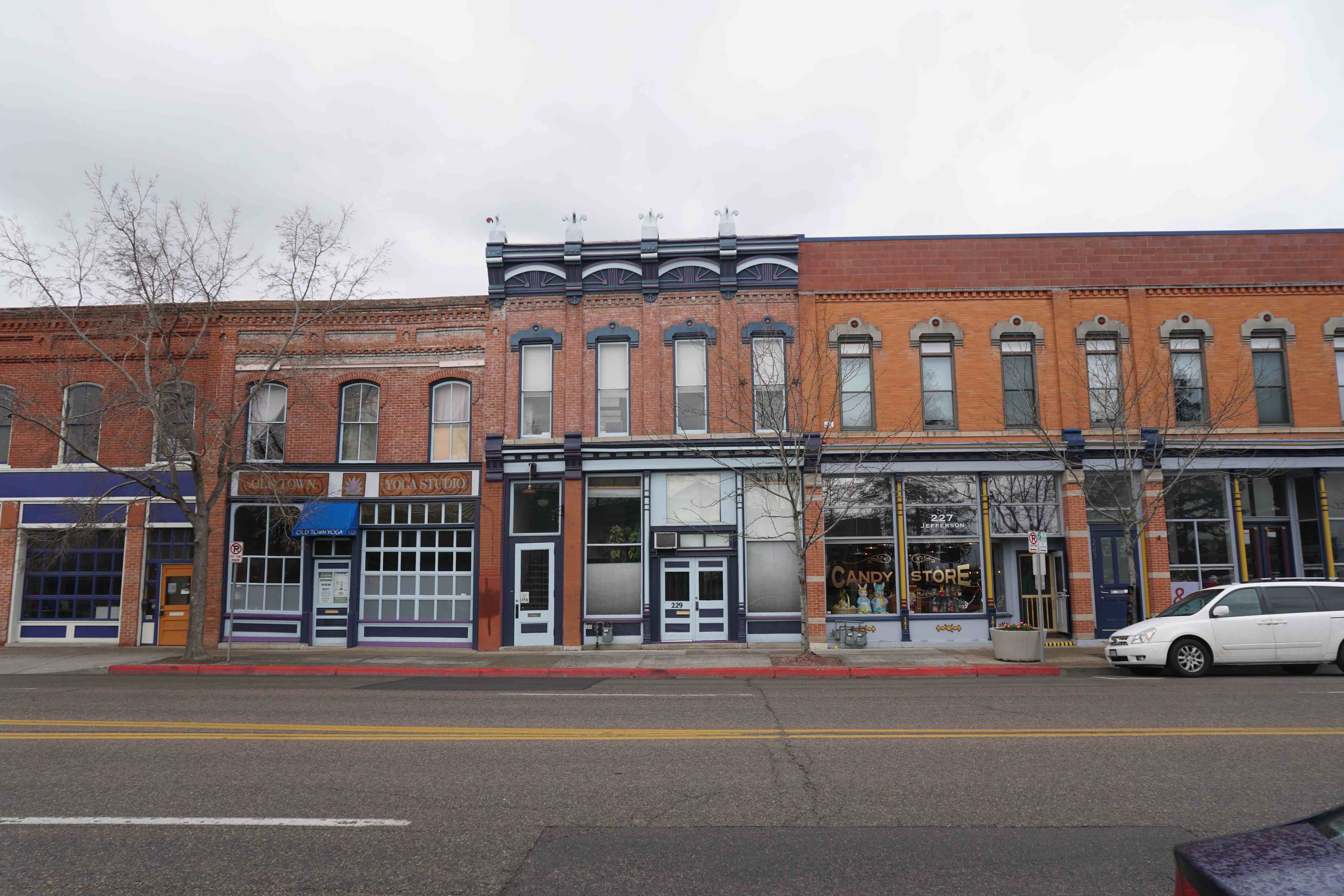 A row of charming buildings along Jefferson Street

Round the corner of Linden Street and admire the view down this strip. Here, a hodgepodge of different building styles come together to form the storefronts. An antique post clock adds whimsy to the area and bears similarity to the one in Disneyland. 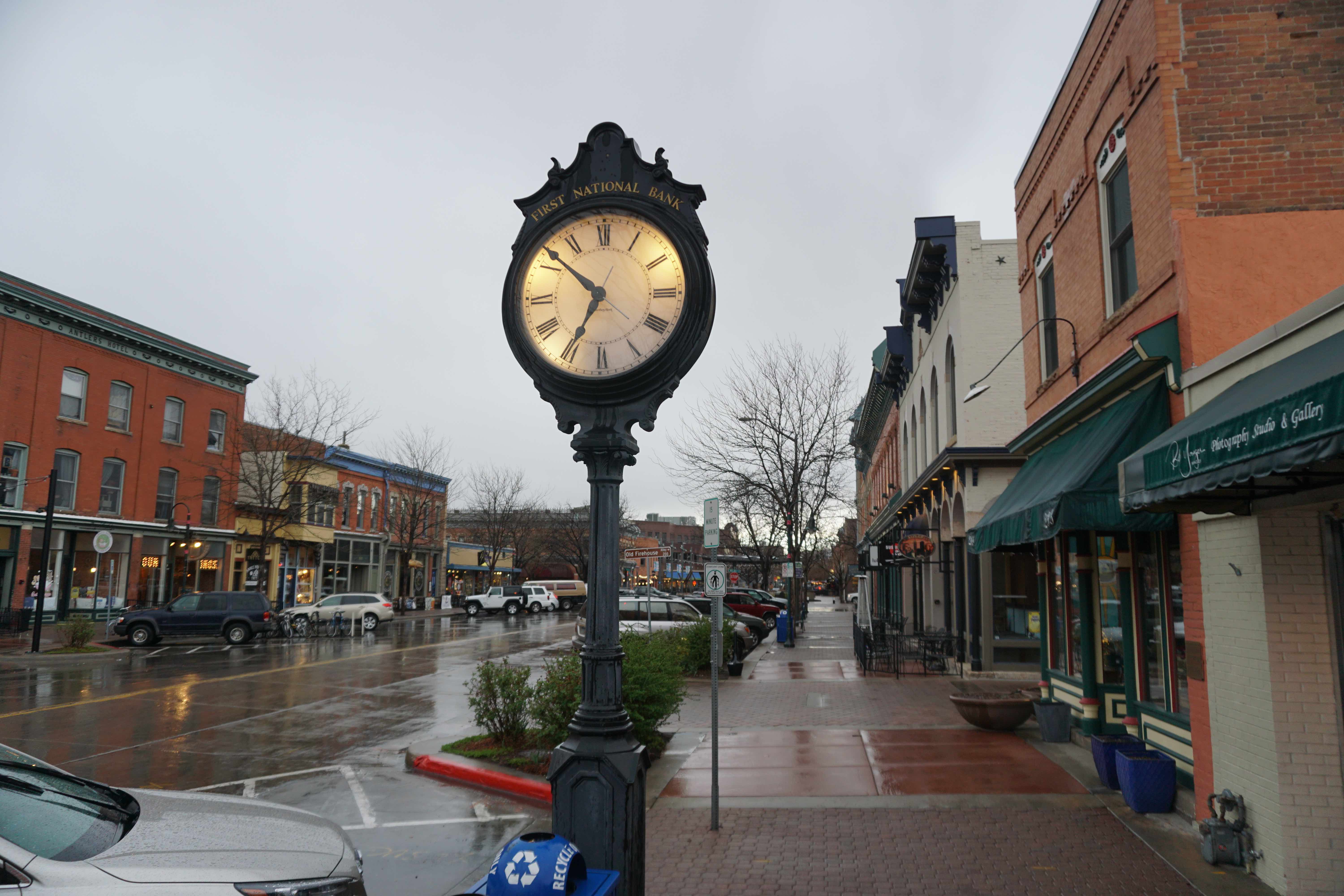 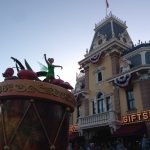 When you get to Walnut, check out the building on the corner. Now home to a store called Nature’s Own (which sells toys, home decor, and trinkets related to the natural world, including many Chester & Hester–style dinosaurs), this building housed the Poudre Valley National Bank of Fort Collins during Goff’s upbringing in the early 1900s. The building’s corner spot with a steeply angled mansard roof and decorative trim reminds me of the main entrance to Disneyland’s Emporium. Of course, Goff didn’t copy any of these buildings detail-for-detail, but we know that he copied elements from many of them and embellished on them to fit the theme of a utopian community. 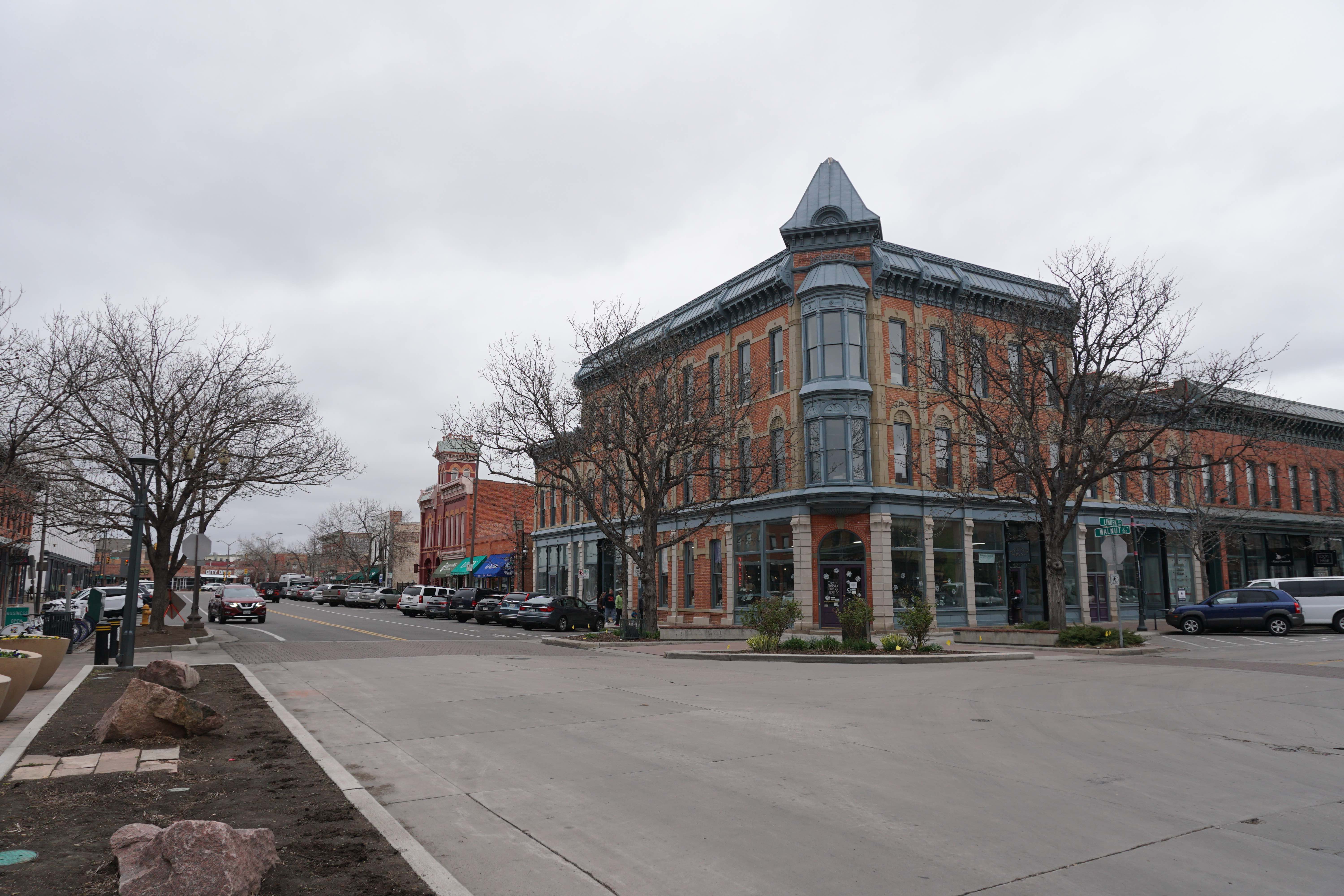 A look down Walnut Street with Nature’s Own on the corner and the old firehouse in the background.

Inside Nature’s Own. Definitely not our dino.

Our next stop is the old firehouse, just a few doors down. This building, built in 1881, houses an independently run bookstore and attached teahouse. Goff used this building as a model for Disneyland’s Town Square Firehouse. Check out the inside, the back room of the book store used to be the horse stable, the original fire pole still stands, and the zen reading room in the teahouse shows remnants of the area which used to be a holding cell for criminals.


The firehouse is also an influential part of Goff’s life as his Dixieland jazz band Firehouse Five Plus Two featured members of Disney’s animation department including Ward Kimbell. The band would dress in fireman garb and often play in front of Disneyland’s Firehouse. 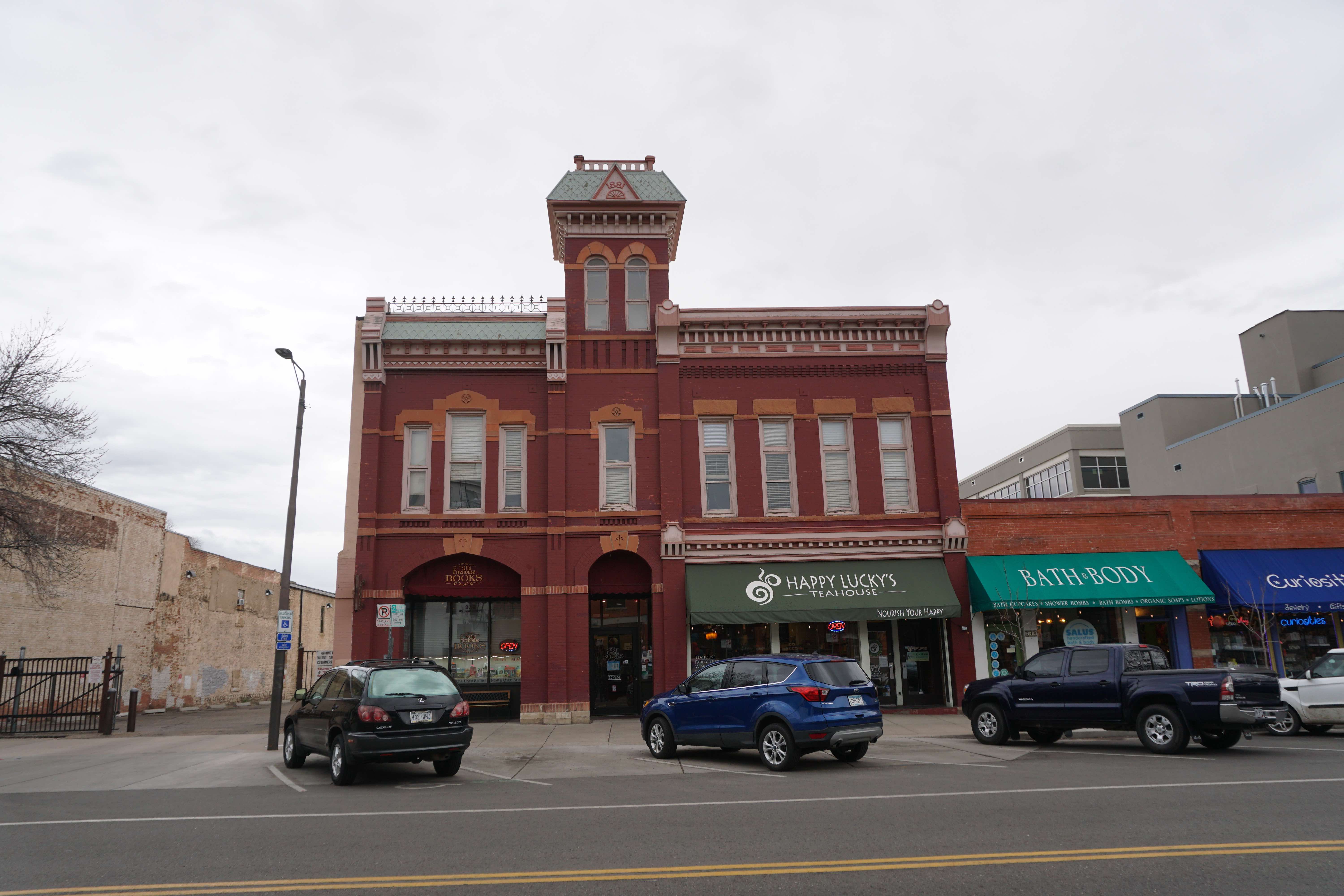 Head back towards Linden and make a right into the Old Town Square, a pedestrian-only street which is a gathering place for events in the Old Town. This area has the most concentration of vibrantly colored Victorian-style buildings, lacy ironwork, and teethlike dentils that we’ve seen thus far. Although we didn’t get to see it at night, we can see that the bulbs strung around the buildings and across the square will provide Disney-quality nighttime lighting. 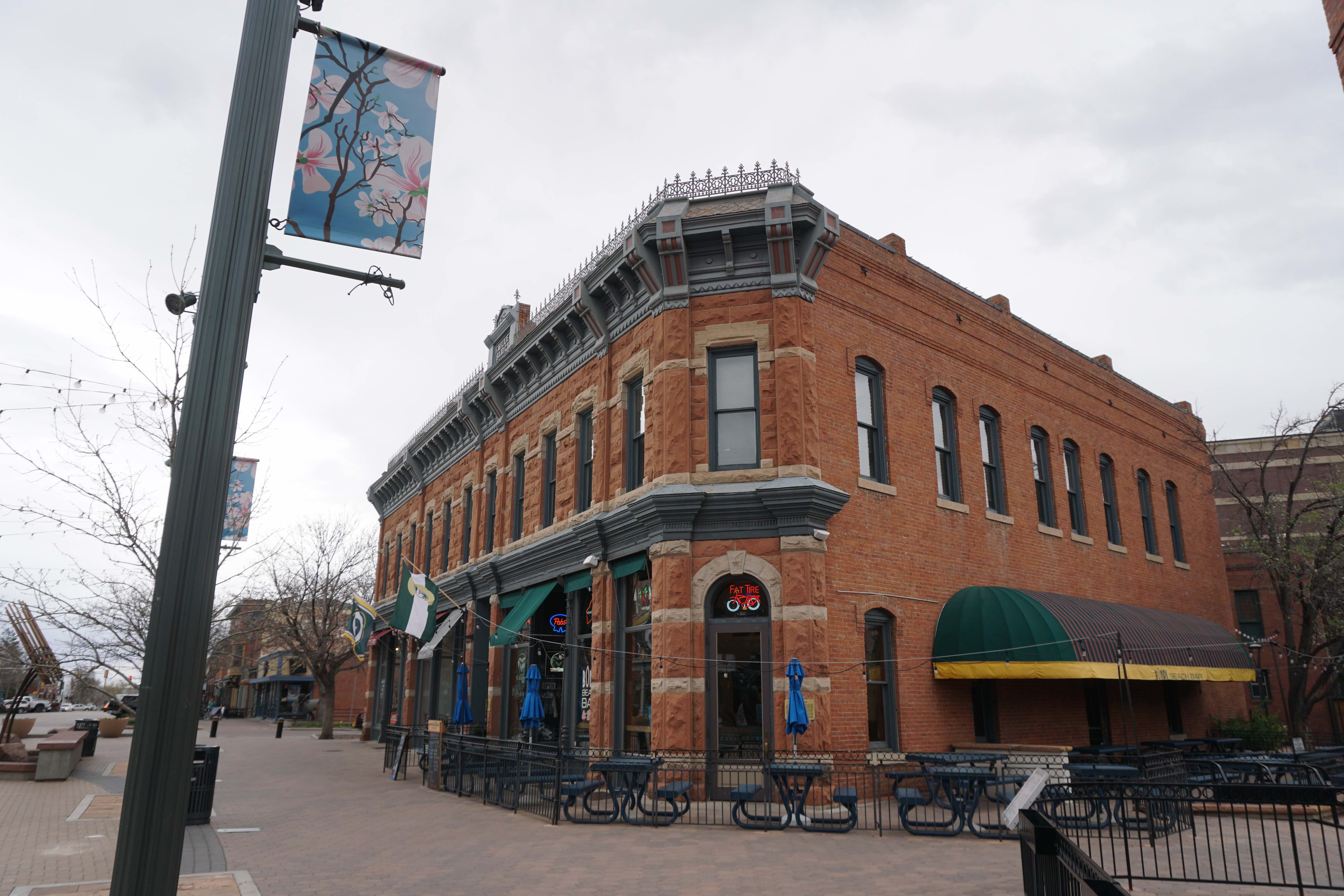 The Frank Miller Block, built in 1888 is now home to Bondi Beach Bar and Grill 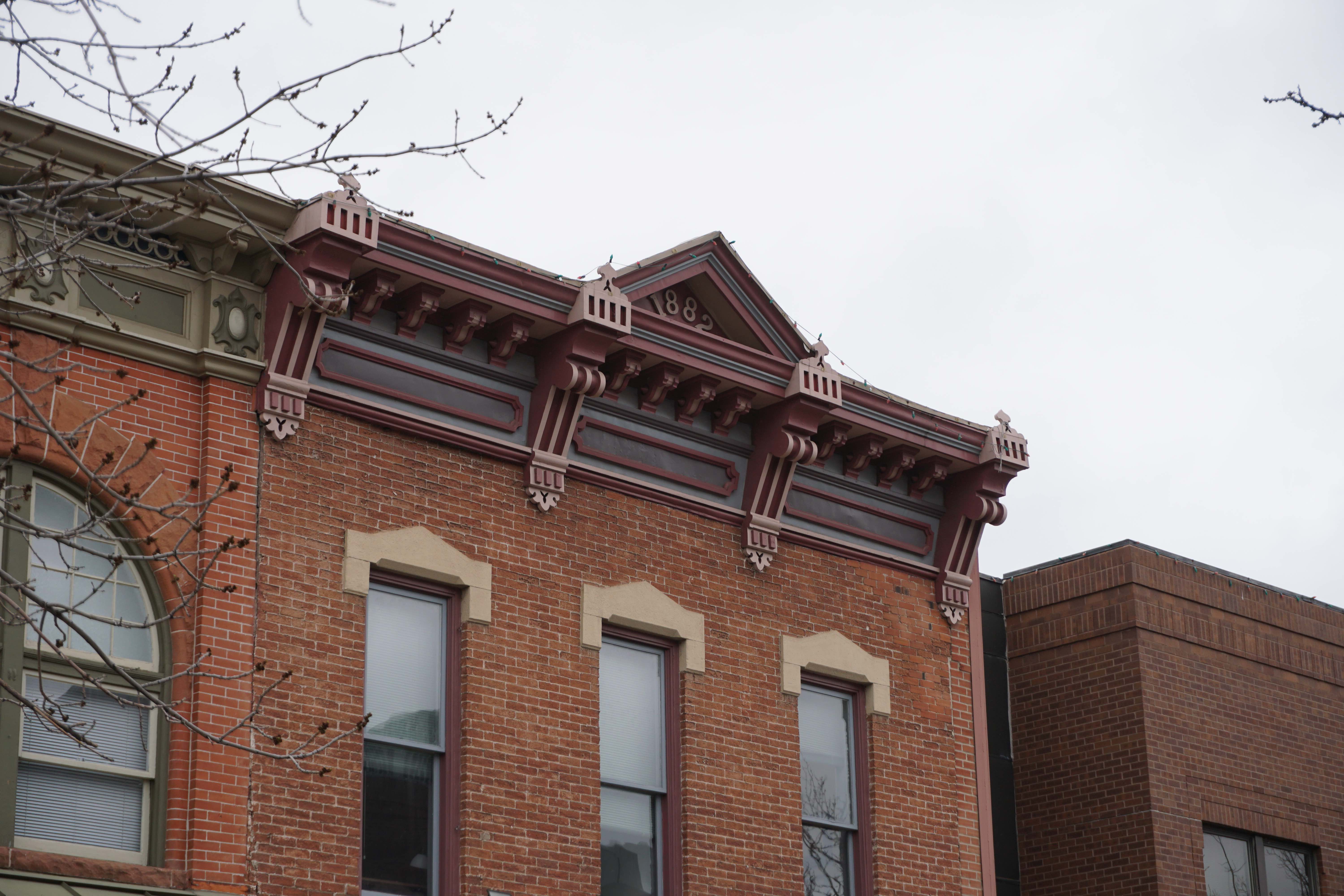 Now that we’re back on Mountain Avenue, hang a left and check out the awnings of the buildings on this row. The green ones of Meanwhile Back at the Ranch especially reminds me of Main Street’s Disneyana building. The side of the building has a vintage Coca-Cola advertisement that looks like something out of Disneyland, but this one went up in 1958 and had remained until 2011 when it was restored to what we see today. During the restoration, it was found that the sign had 27 layers of paint underneath, leading us to believe that young Harper Goff saw some sort of glorious artwork on this very wall. 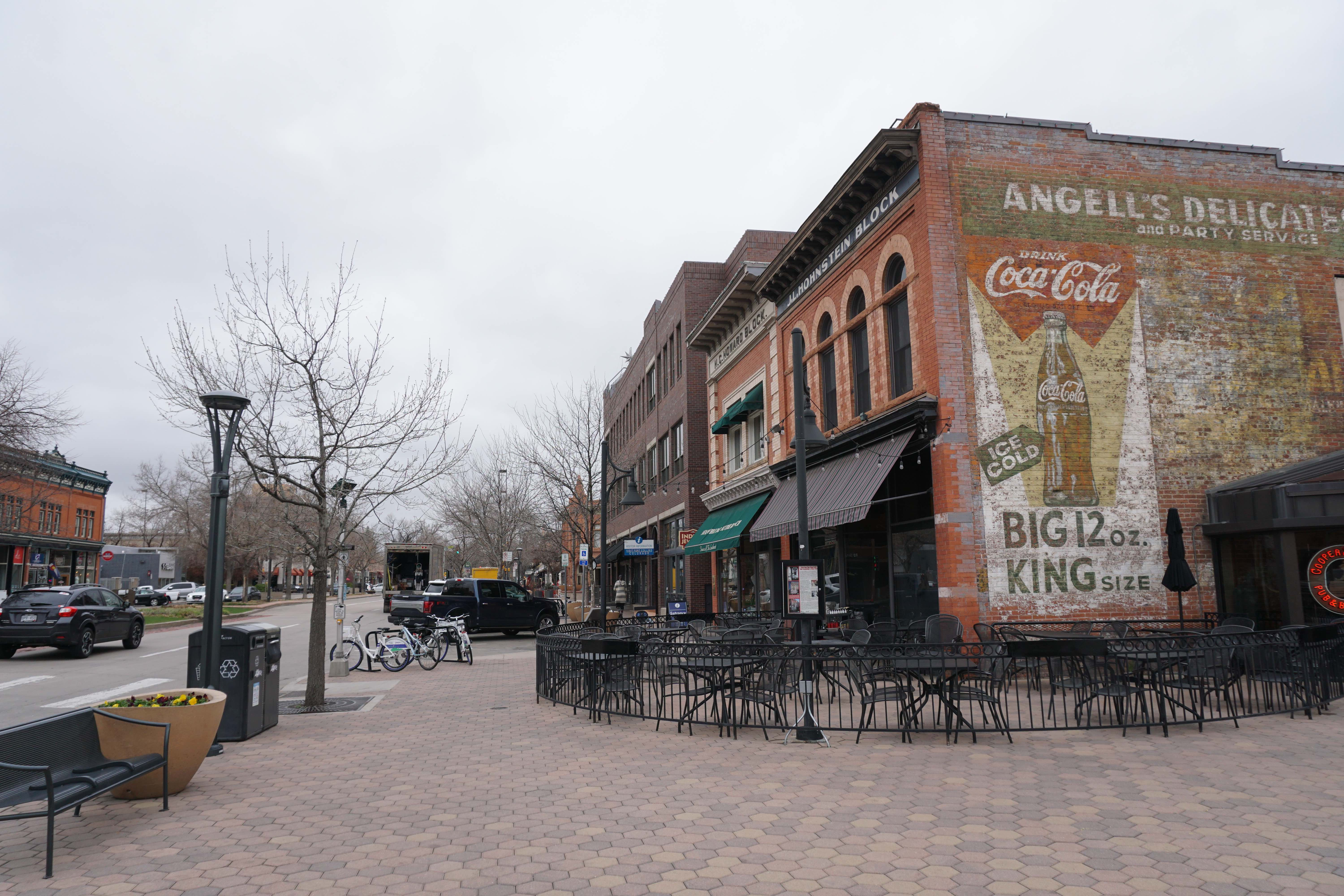 An original Coca-Cola advertisement from 1958, restored in 2011

Our last stop is actually in the middle of the street on Mountain Avenue. Here, remnants of the town’s original trolley tracks have been embedded in the road along with modern asphalt. The trolley ran here from 1907 until 1951 and Goff would have likely ridden it as a child, thus adding to his fascination with trains, much like Walt. For a taste of nostalgia, the Fort Collins Municipal Railway Society operates a restored streetcar along Mountain Avenue from City Park to Old Town on weekends during the summer. Find more info on the FCMRS website. 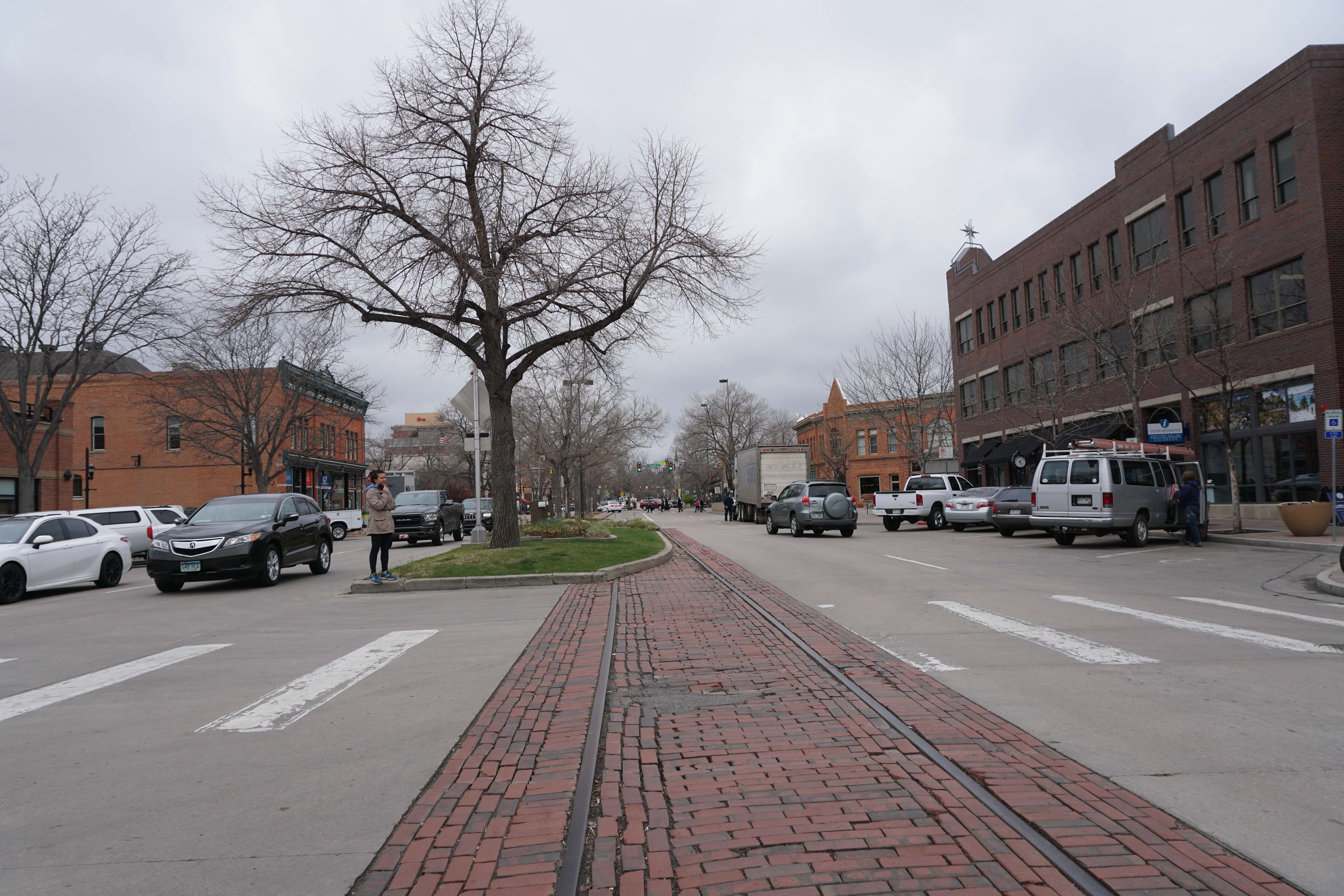 Bonus stop! While it’s not the Emporium we know and love, the nearby Emporium Kitchen seems like a great place to unwind after a long day of exploring a Disney Legend’s hometown that inspired not only Disneyland’s Main Street but also every subsequent Main Street in Disney Parks around the world (and even World Bazaar and Mickey Avenue).

We hope you had a fun journey with us checking out the similarities between beautiful Fort Collins and Main Street, U.S.A., as seen through the eyes of Imagineer Harper Goff.

Be sure to take a look at the WanderDisney items mentioned in this blog post: