The most comforting thing a weary traveler could see when stepping off of a train in a remote part of a foreign country is the Rebel Alliance Starbird, discreetly on display. We knew we were in the right place. 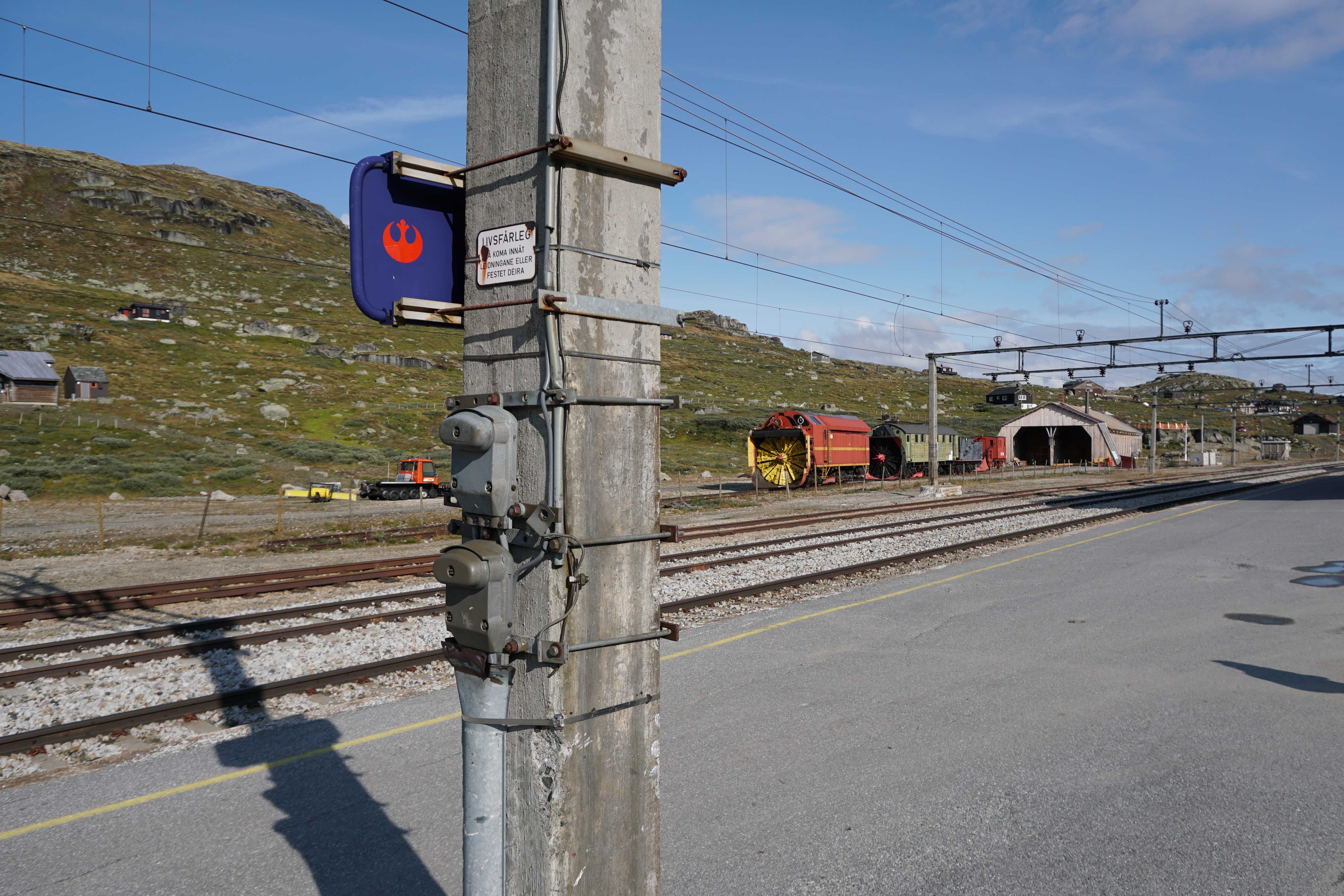 The town of Finse is clearly a Rebel base

Welcome to Finse, a tiny mountain village on the shores of Finsevatnet Lake, smack-dab in the middle of Norway‘s hiking country. Only accessible by train (~2.5 hours from Bergen or ~4.5 hours from Oslo) or hiking trail, Finse is as obscure as it can get at first glance, but don’t let its deserted look fool you (besides the railway station, there are only a handful of buildings around you), this place holds a Disney secret… Finse was one of the sites of the Battle of Yavin, the Galactic Civil War that took place a long time ago in a galaxy far, far away (cue the music)…

Evading the dreaded Imperial Starfleet, a group of freedom fighters led by Luke Skywalker has established a new secret base on the remote ice world of Hoth 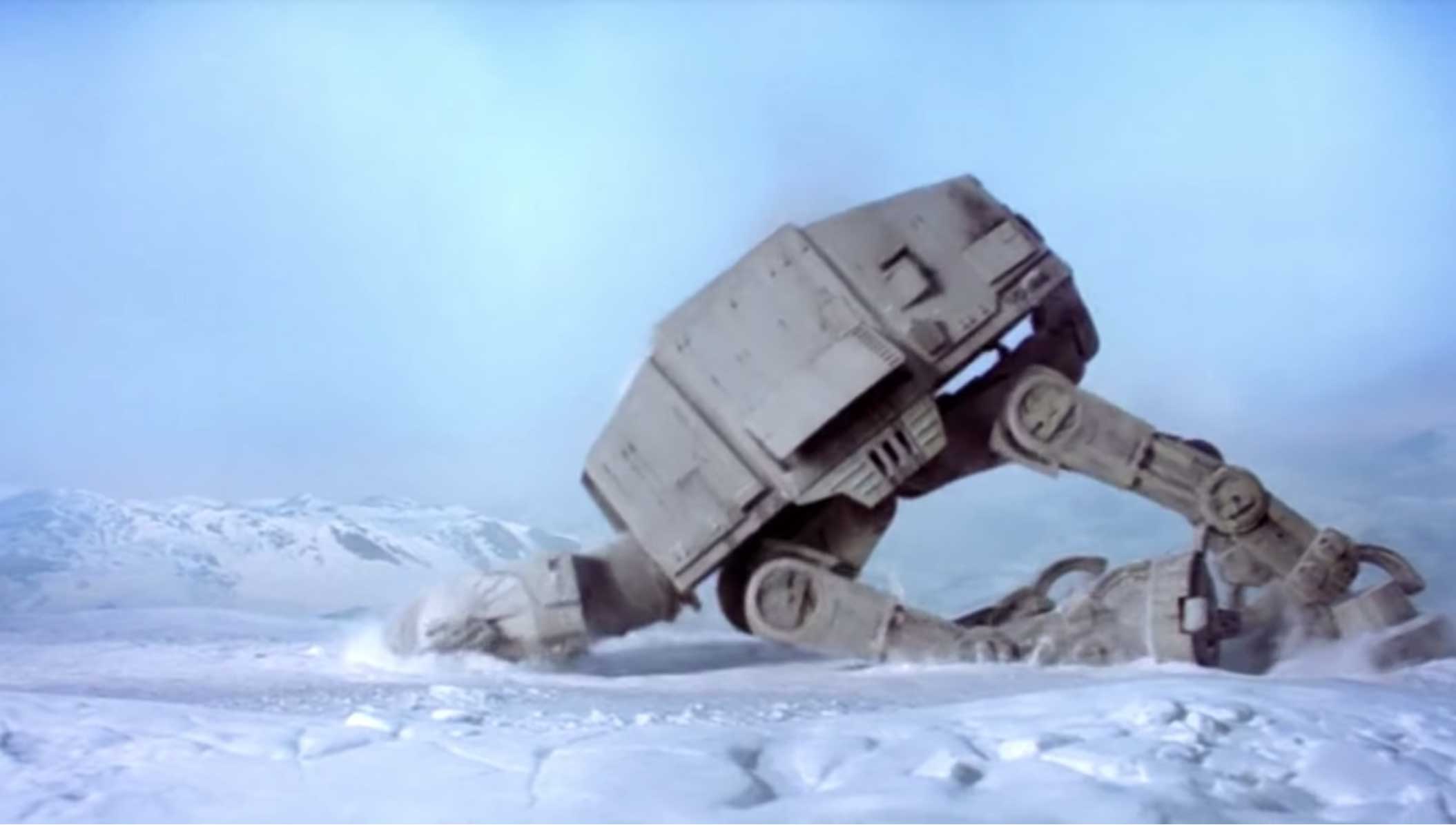 File footage from the battle that took place on Hoth. Image ©Disney/Lucasfilm

You see: back in March of 1979, a team of cast and crew descended on Finse to commence production of Star Wars: Episode V – The Empire Strikes Back. Finse and the nearby Hardangerjøkulen would play the role of the ice planet Hoth and its Echo Base.

Star Wars fans from around the world make a pilgrimage here every winter (when snow covers the vast Norwegian landscape) to attend a fan event called Visit Hoth, checking out the filming locations while dressed as their favorite character. Unfortunately, our visit took place in August, where the only snow in sight was confined to the massive glacier‘s edge.

Our first stop upon visiting the town was the Finse 1222, an elegant hotel only steps from the train station. This hotel housed Mark Hamill, Carrie Fisher, and the entire Star Wars production team during their stay. 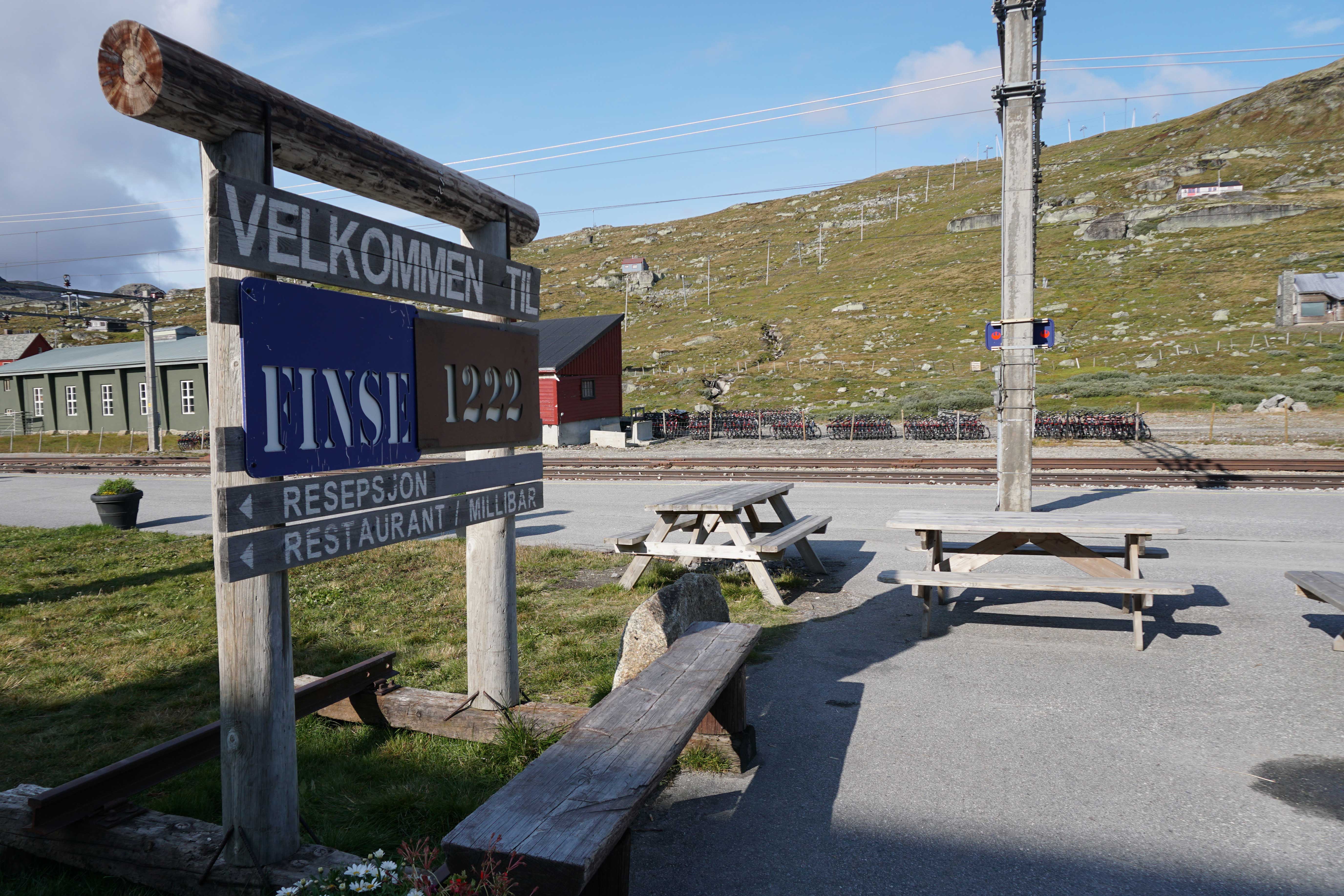 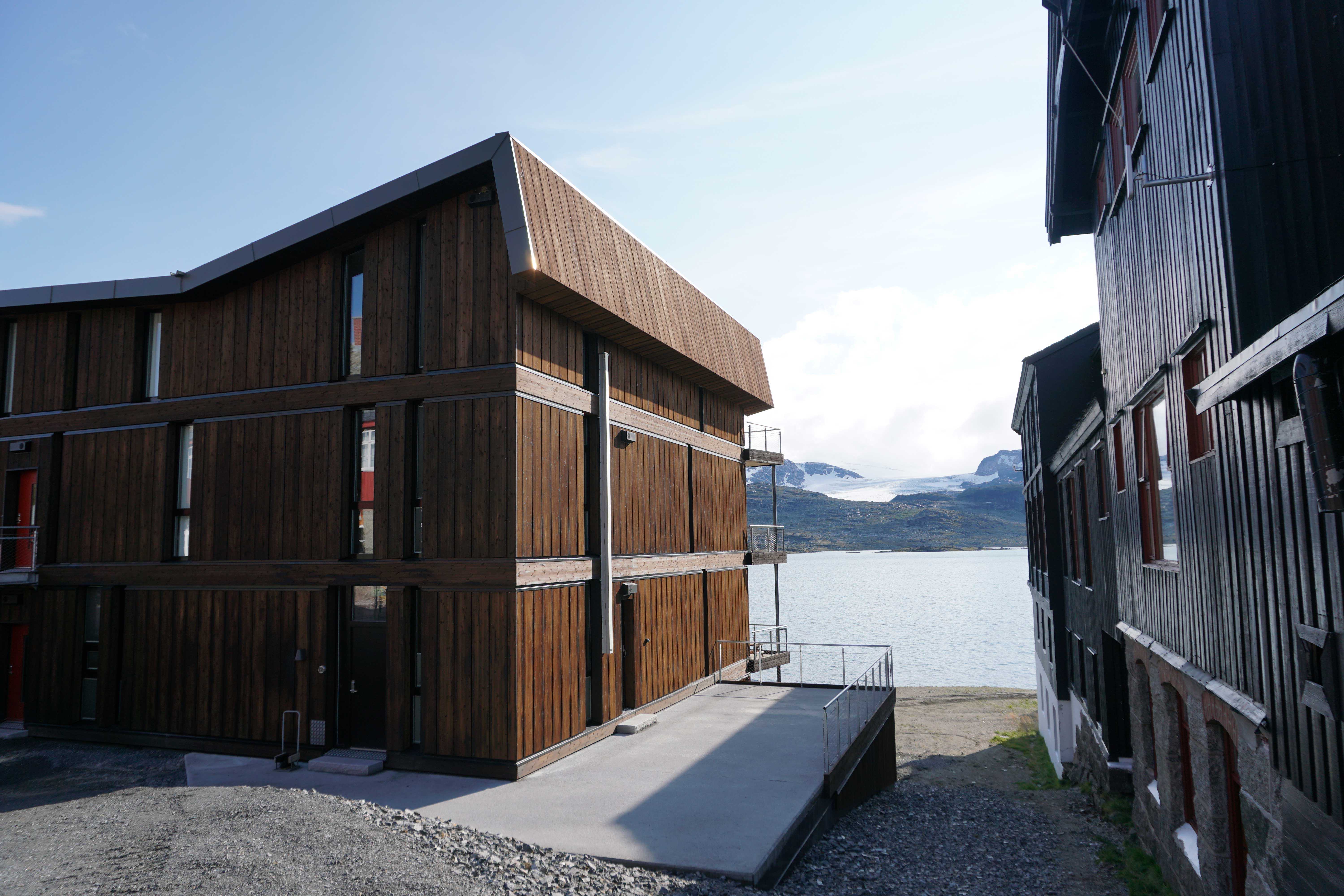 A view of the Hardangerjøkulen glacier from the Finse 1222 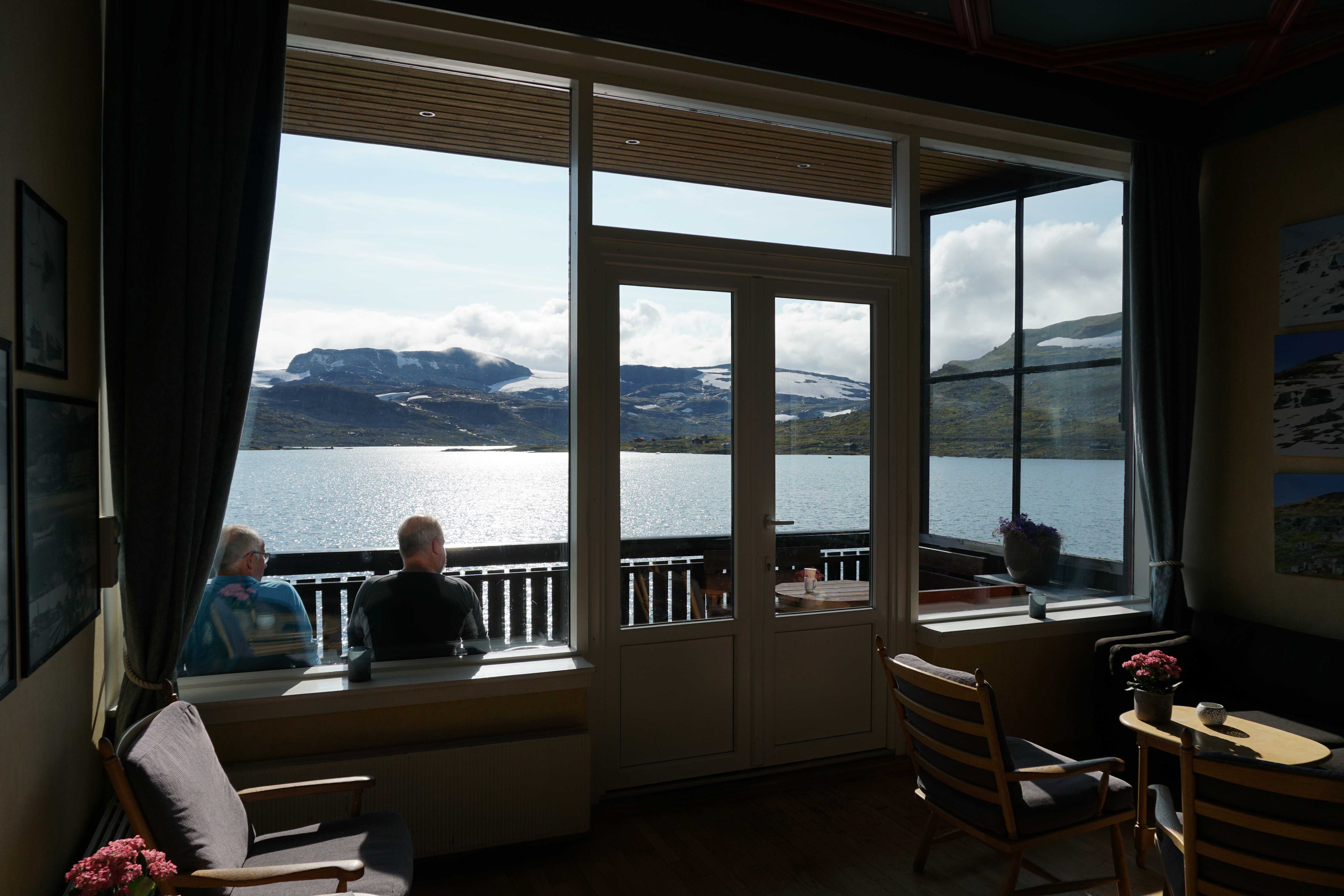 We wandered the grounds, grabbed a warm drink at their cafe, then checked out the hotel’s free museum: a gallery of production stills and news-clippings devoted to their connection to the Star Wars universe. Read more about the hotel and museum on the WanderDisney location page for Finse 1222, by clicking here. 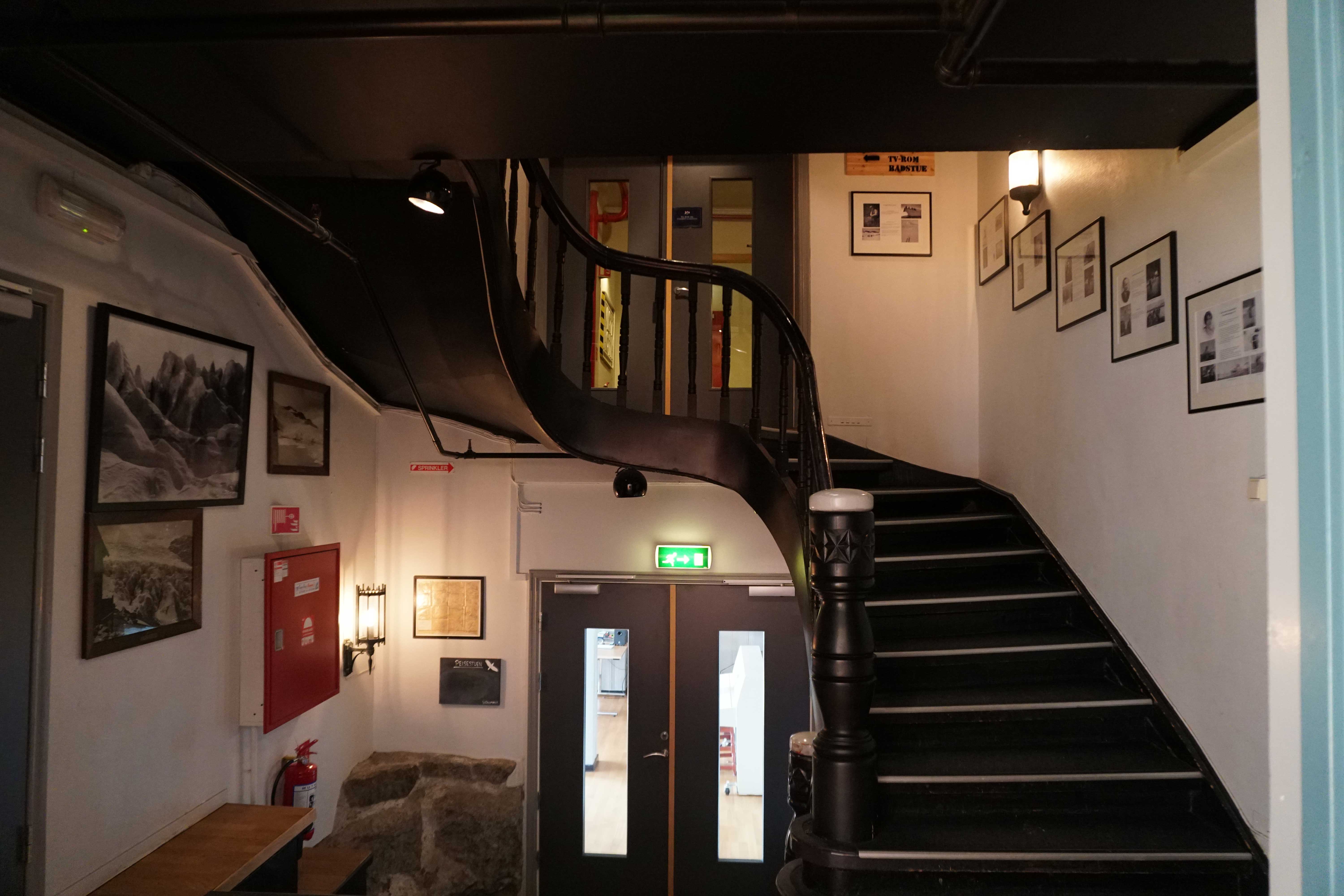 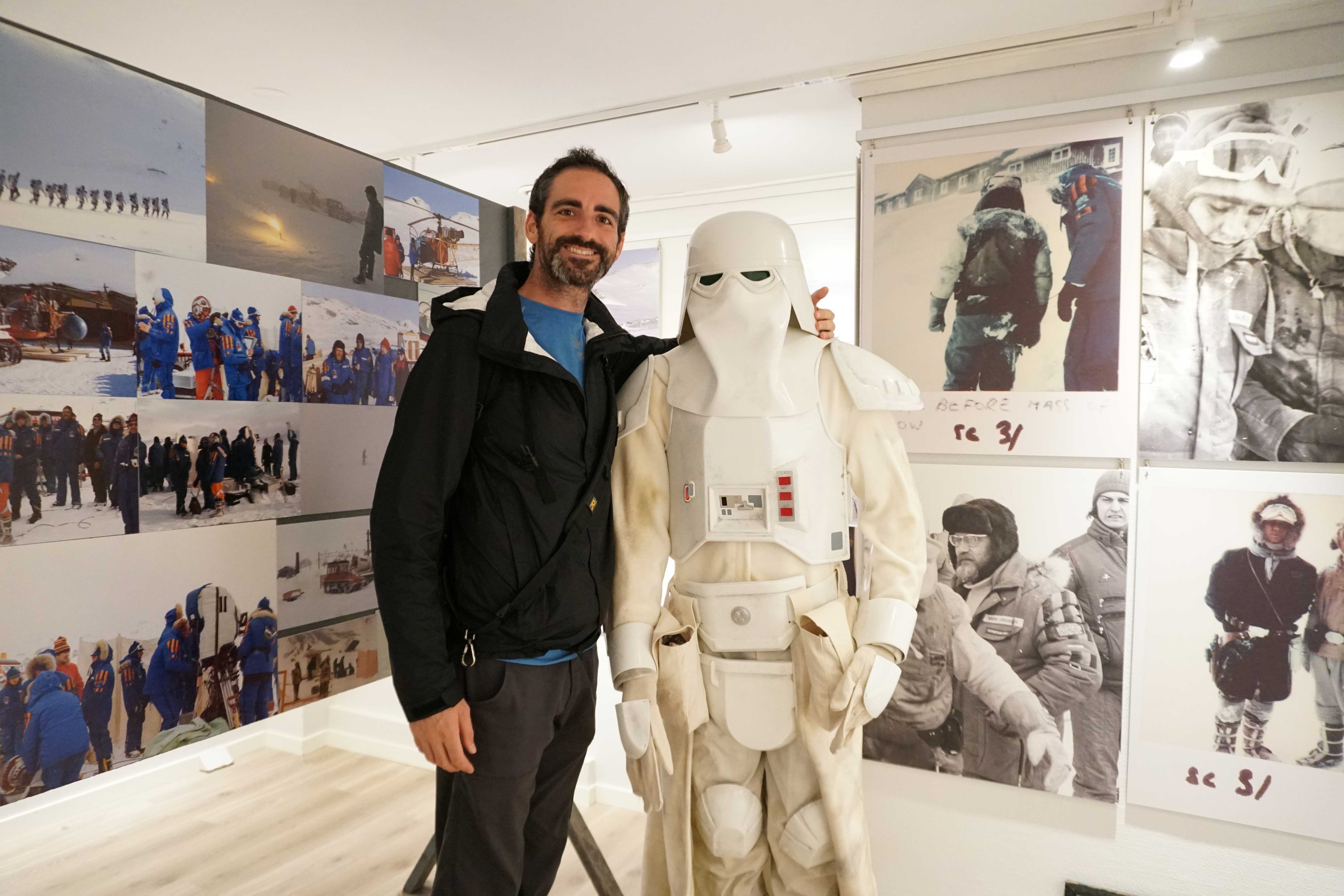 Making friends with the enemy

After many, many photos, we continued on. As much as we would have loved to have slept on the same bed as Luke Skywalker, the Finse 1222 was out of our price range as we were on a tight-budget backpacking trip.

We opted for the nearby Finsehytta, a full-service cabin operated by Norway’s Trekking Association (or DNT). If you didn’t know, Norway has an incredible system of hiking trails and cabins that guarantee space, even without a reservation, great for budget conscious travelers and those looking to explore Norway’s amazing nature trails. 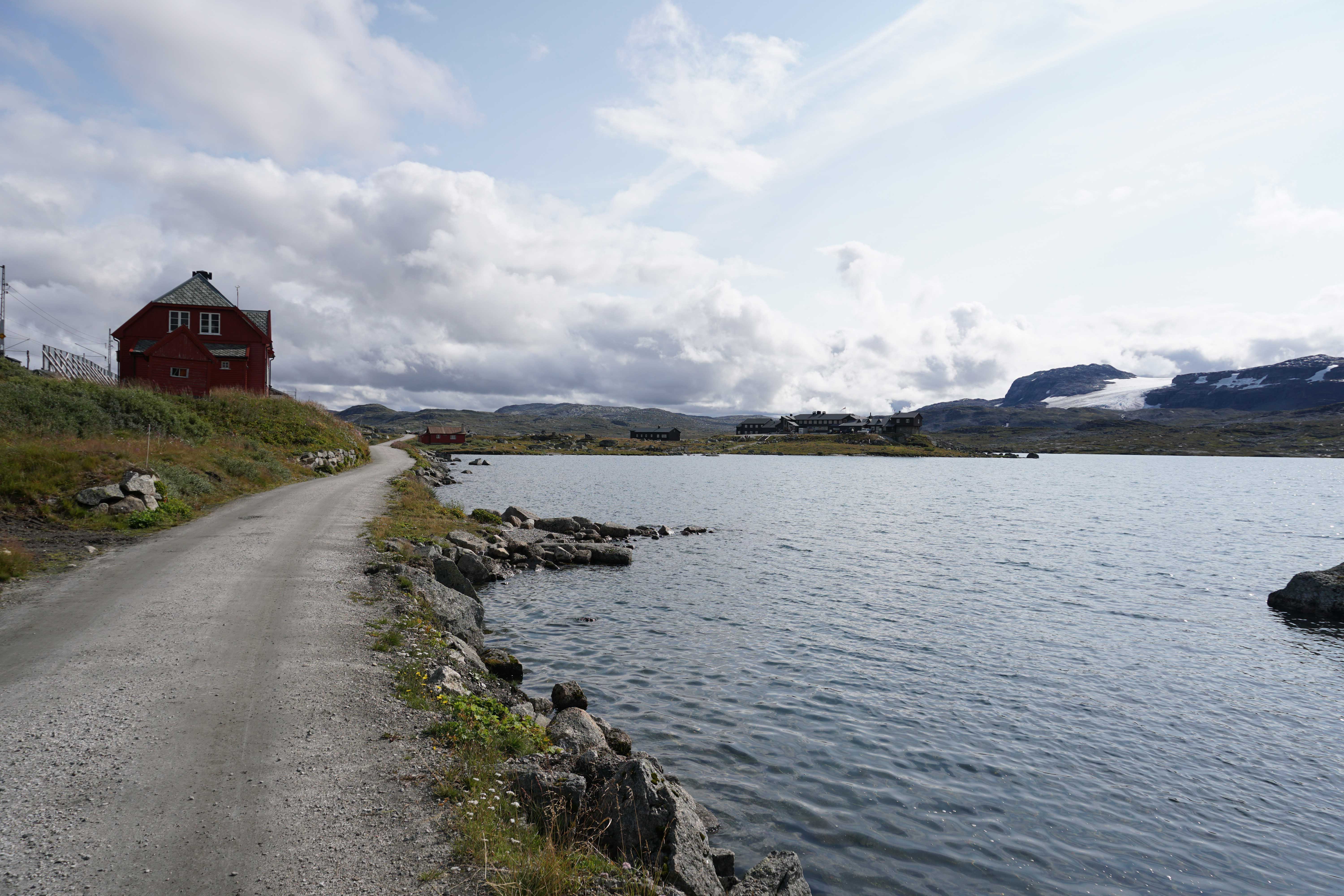 Walking from the Finse train station. You can see the Finsehytta on the right and Hardangerjøkulen glacier behind it.

The Finsehytta was less then 10 minutes on foot from the railway station and offers a choice of dormitory or private rooms and full-service dining options, perfect since the closest grocery store is over 20 miles away. 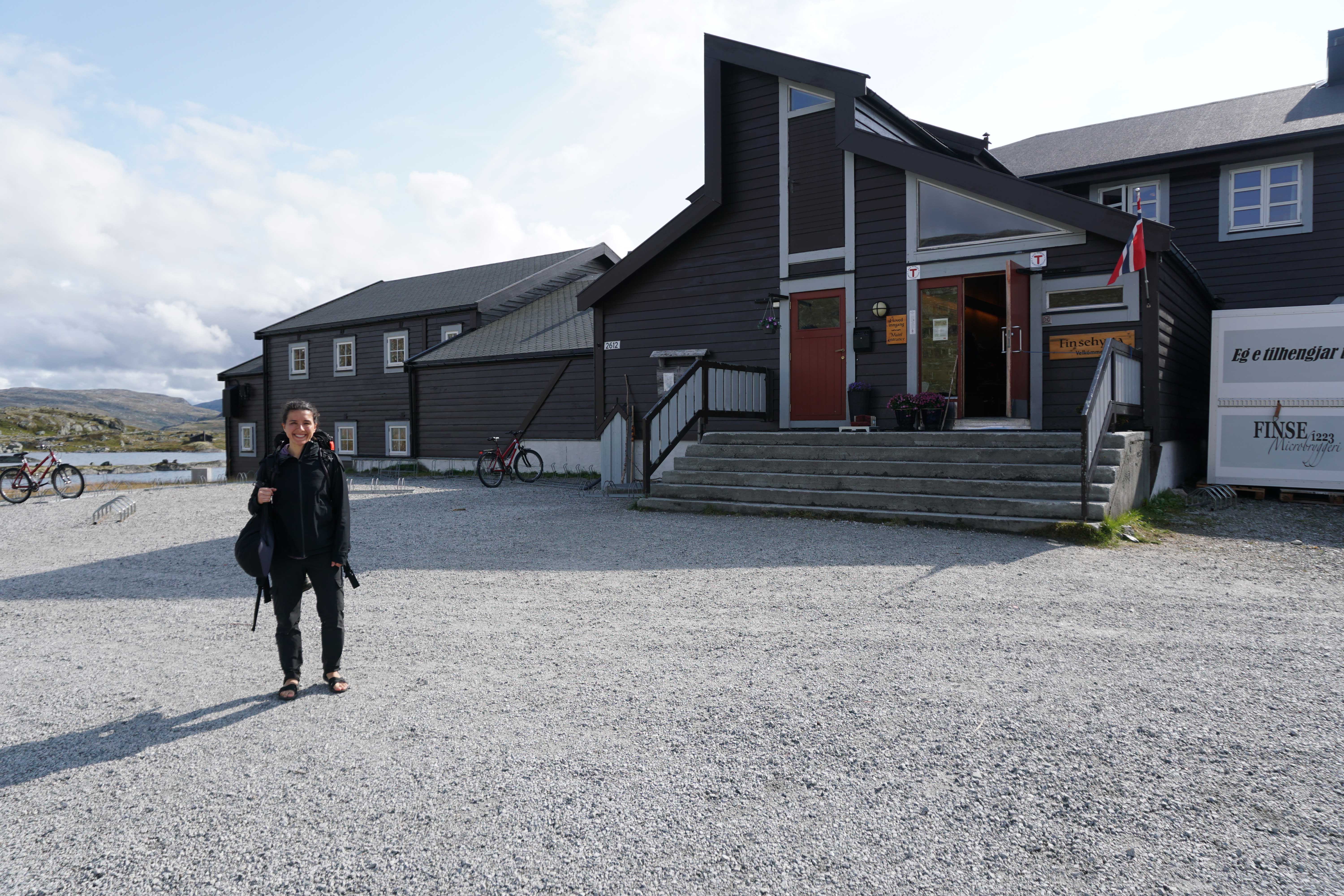 Arriving at our lodge 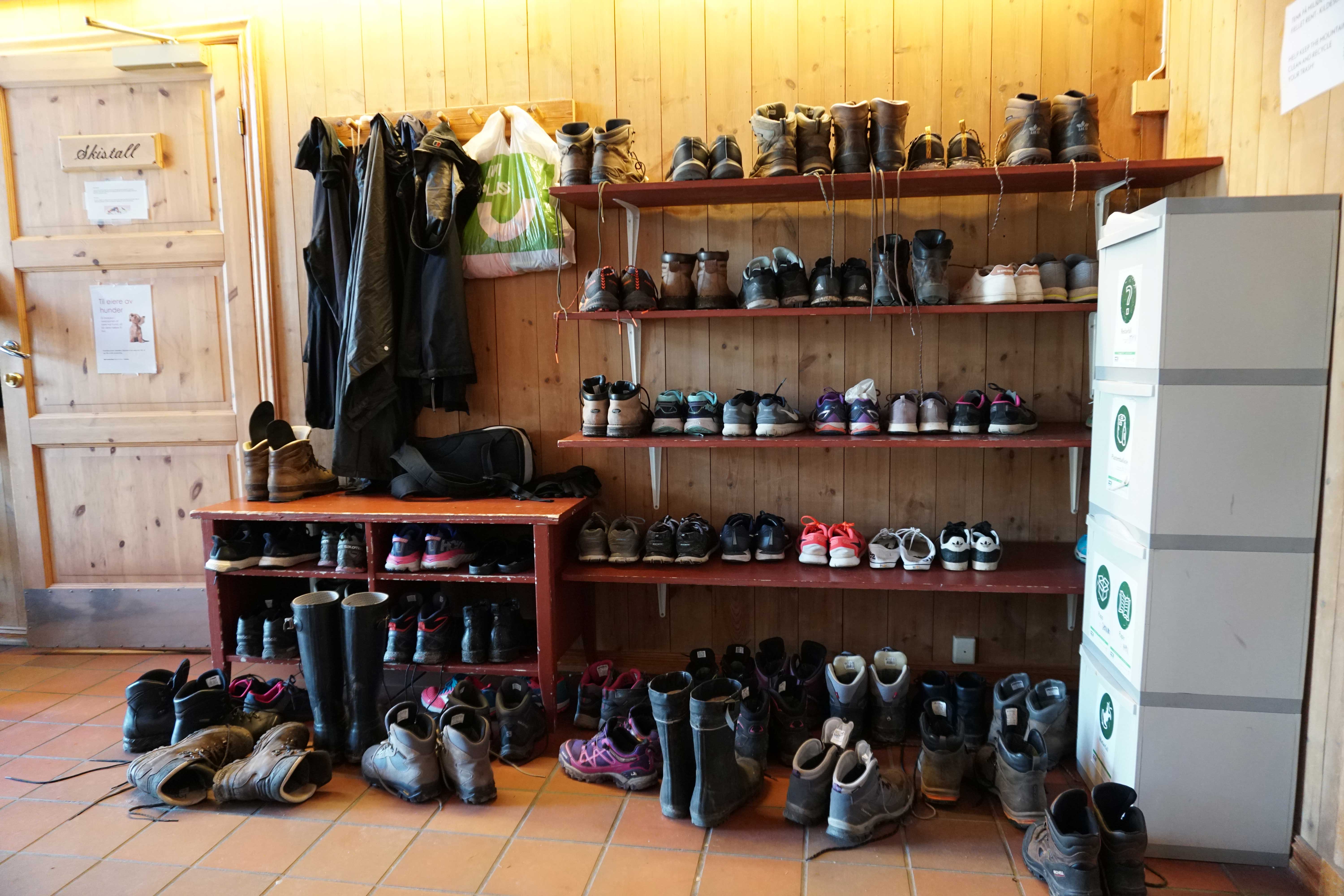 Upon check-in, we stowed our luggage and took to the lobby where we relaxed with a flight of beers on the lodge’s patio, well deserved after our morning of hiking before arriving in Finse.

We should mention that this place has its own microbryggeri, a small batch micro-brewery called Finse 1223 (as its location is 1223 meters above sea level, one meter higher than the aptly-named Finse 1222) offering several styles of beer and cider. We tried a flight of four and were not disappointed by any. 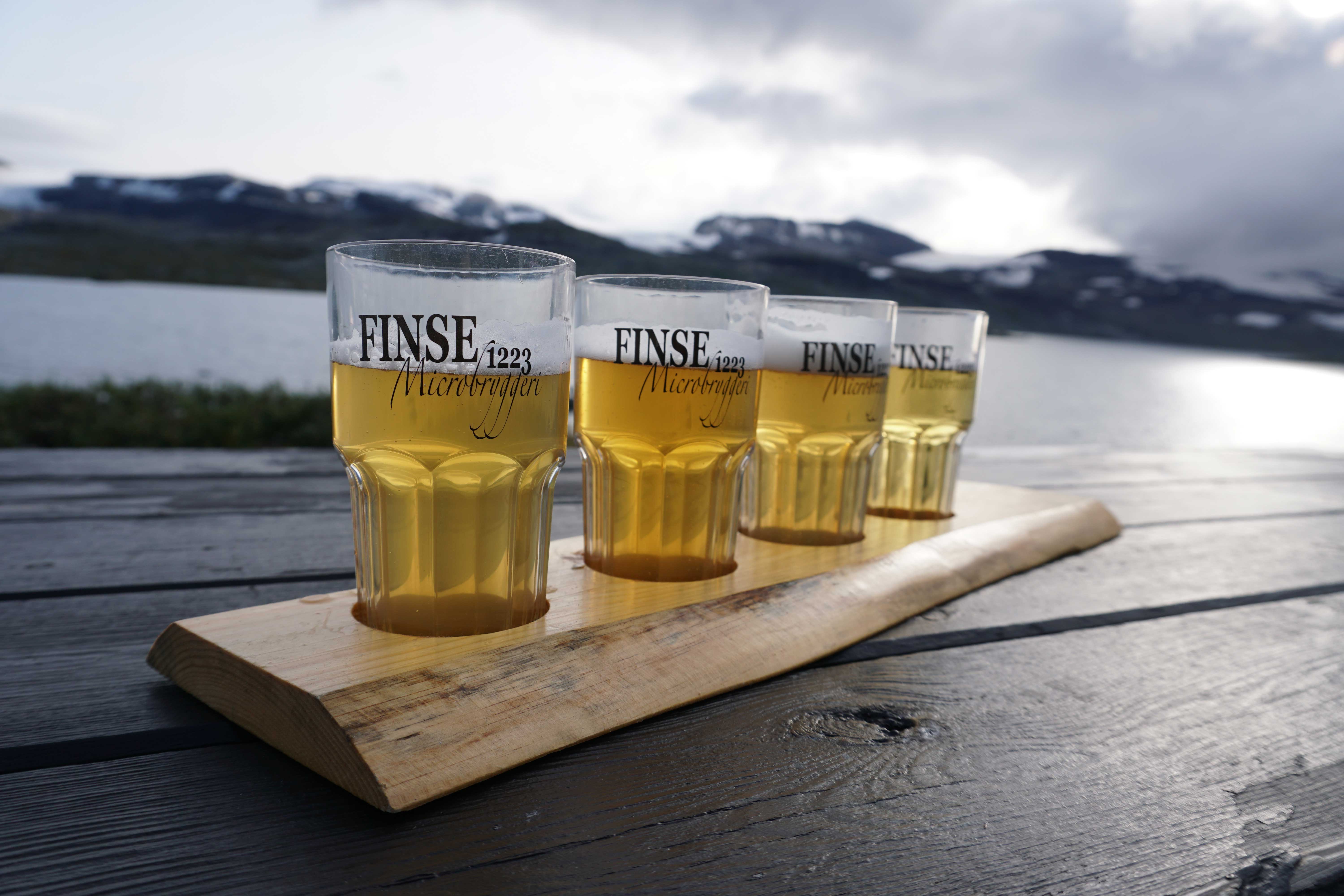 A sampling of Finse’s local micro-brews 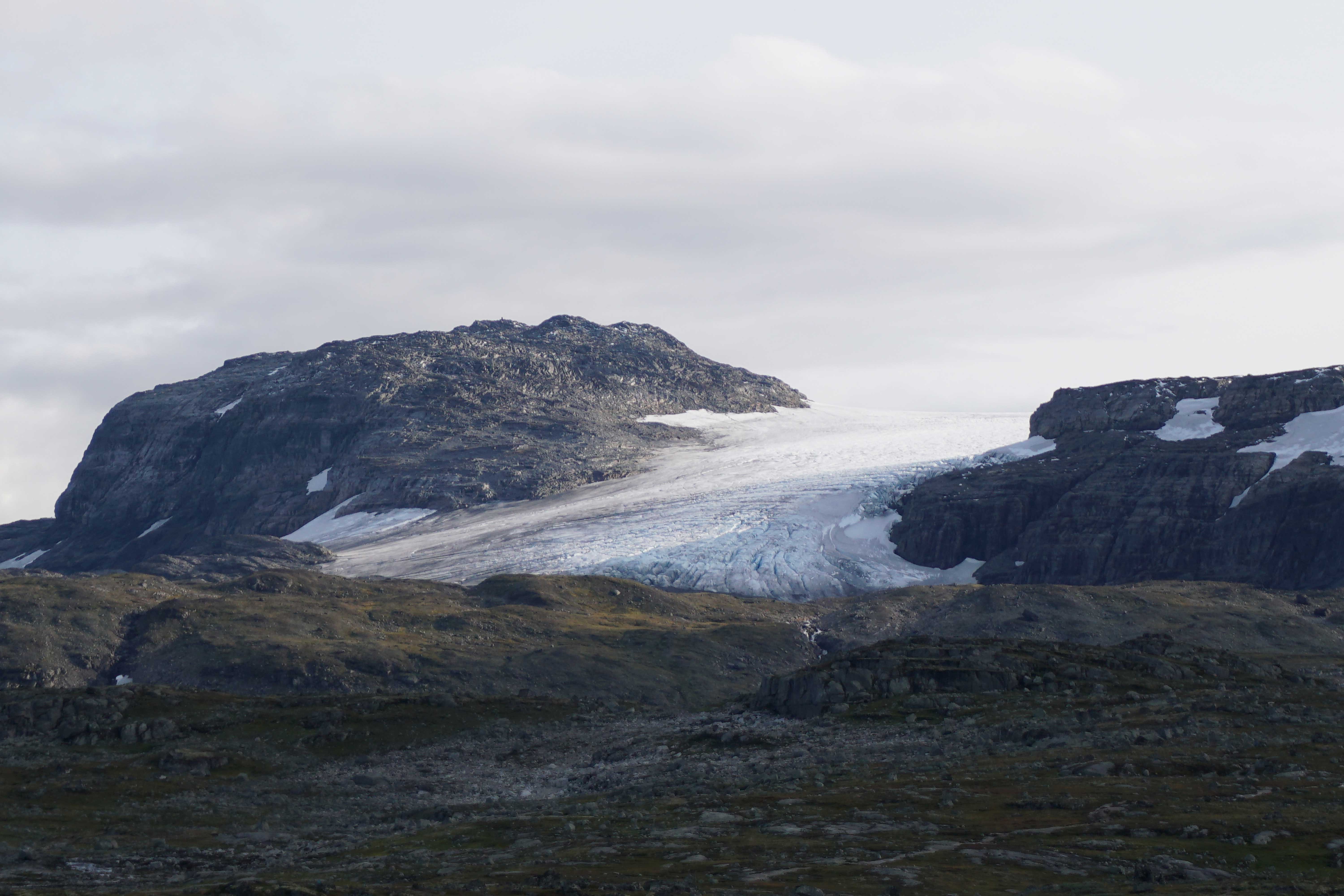 A enjoying a beer with this gorgeous view of Hoth

After a hearty dinner (served on branded dinnerware), we turned in for the night, in preparation for our big hike to Hoth the next morning. 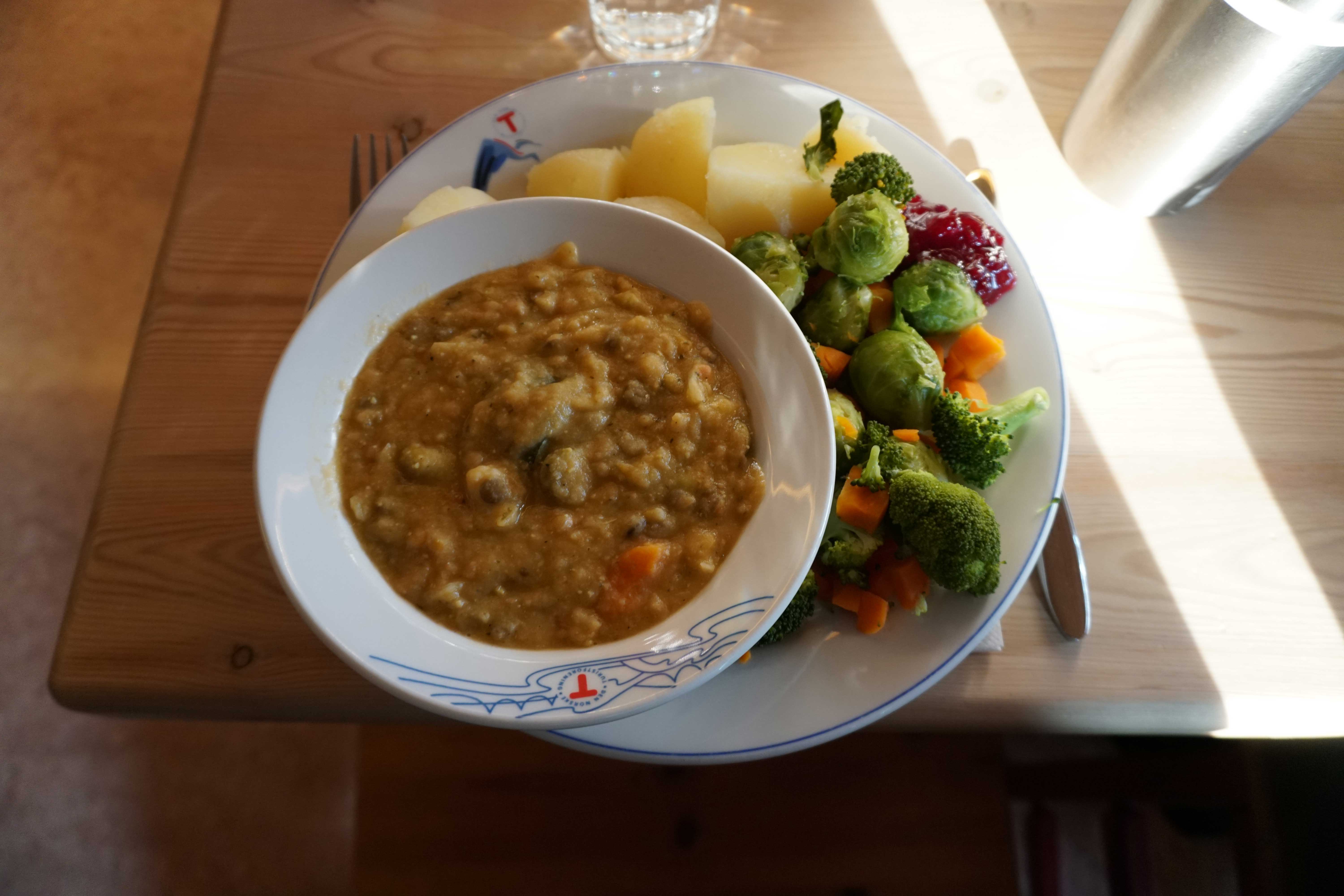 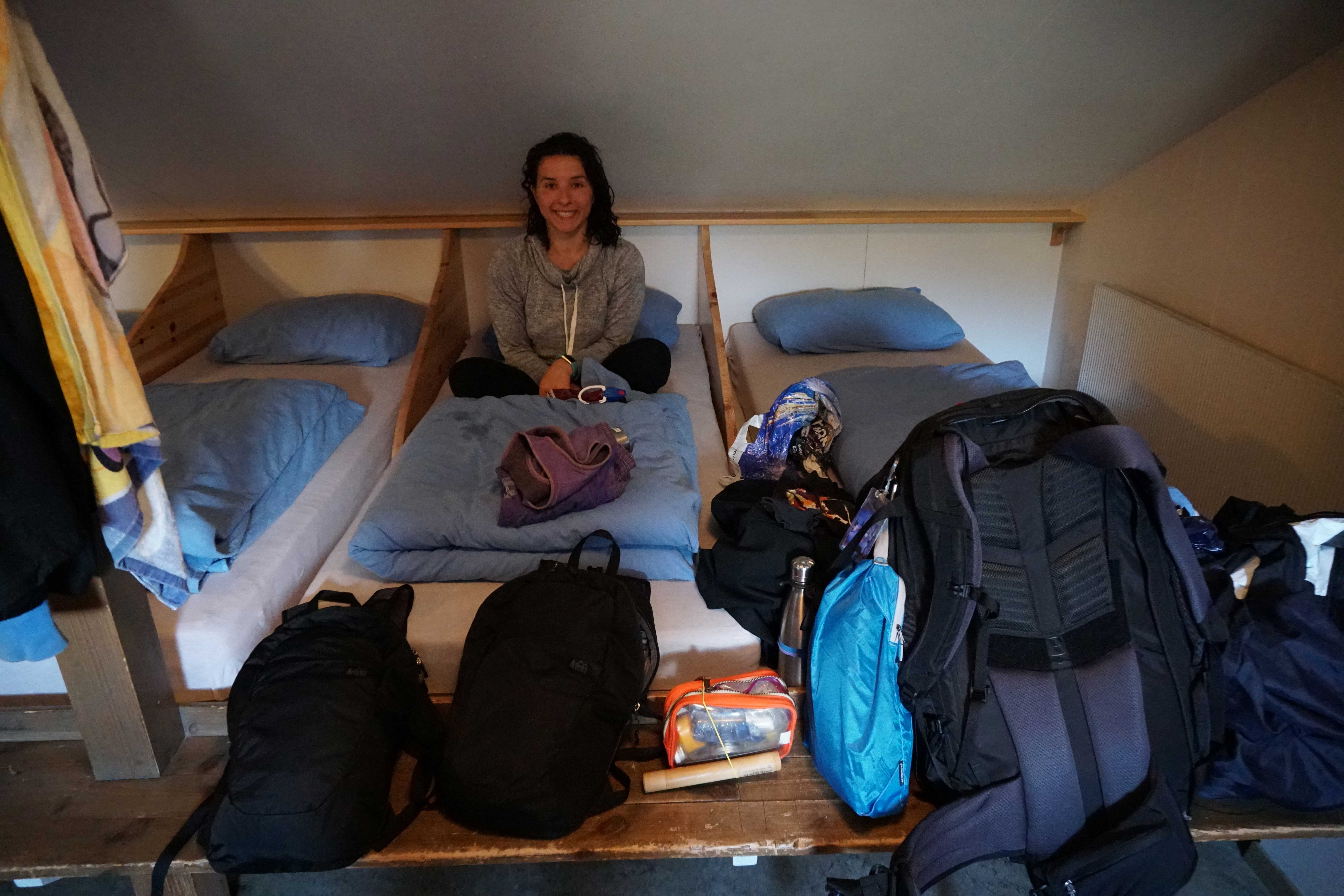 Getting ready for bed!

Waking up with the sun the next morning, we grabbed breakfast, packed a lunch for our hike, and set out on our adventure. Armed with a map of the trail (you can download the GPX here or ask the lodge/hotel for a paper map), we strapped on our boots and hit the trail. 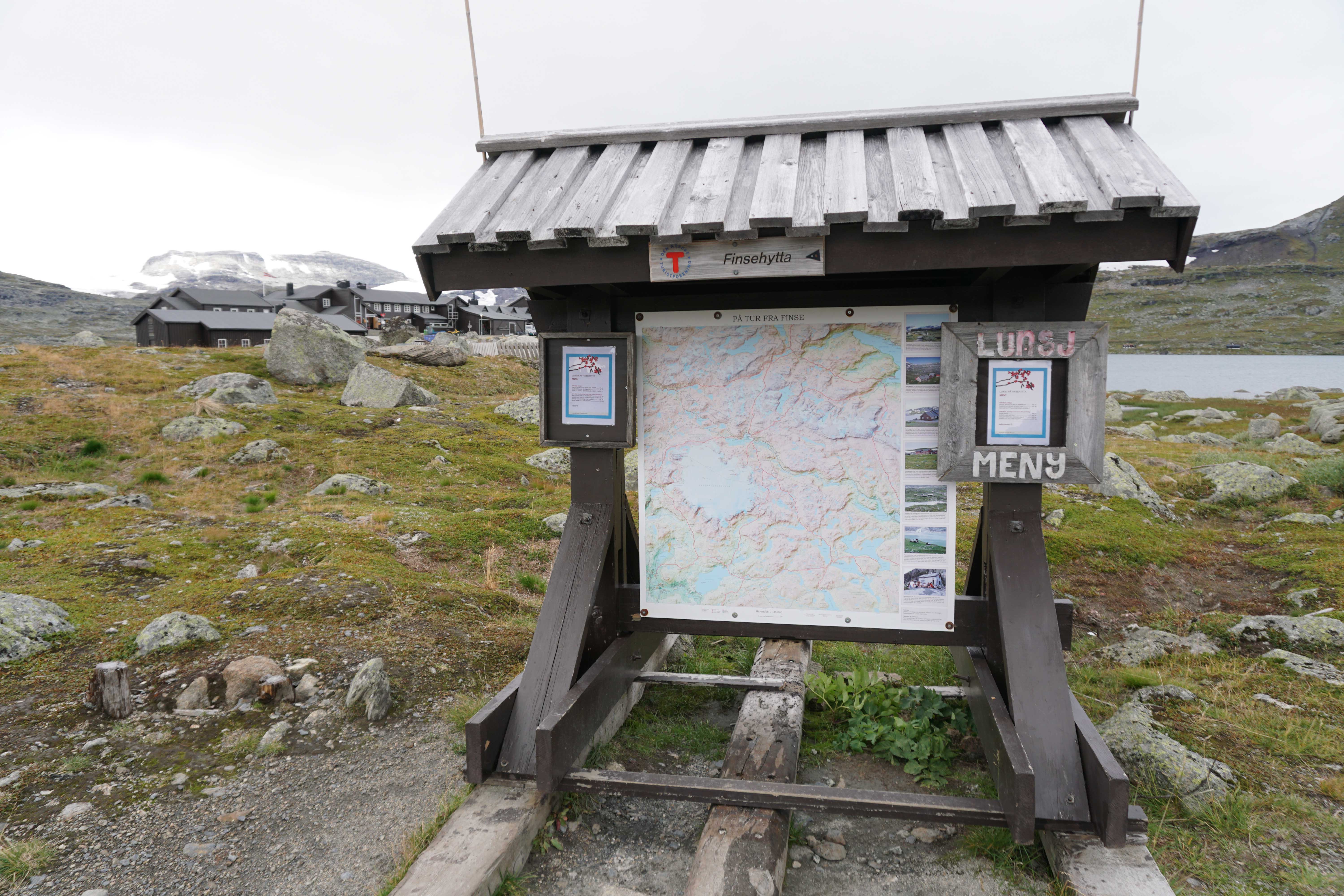 Heading out on our hike!

Our mission was to make our way to the edge of the Hardangerjøkulen, while hitting as many Star Wars filming locations as possible, using the official StarWars.com website as a guide. We’ve also documented these spots on our WanderDisney location page for the glacier, check it out by clicking here. 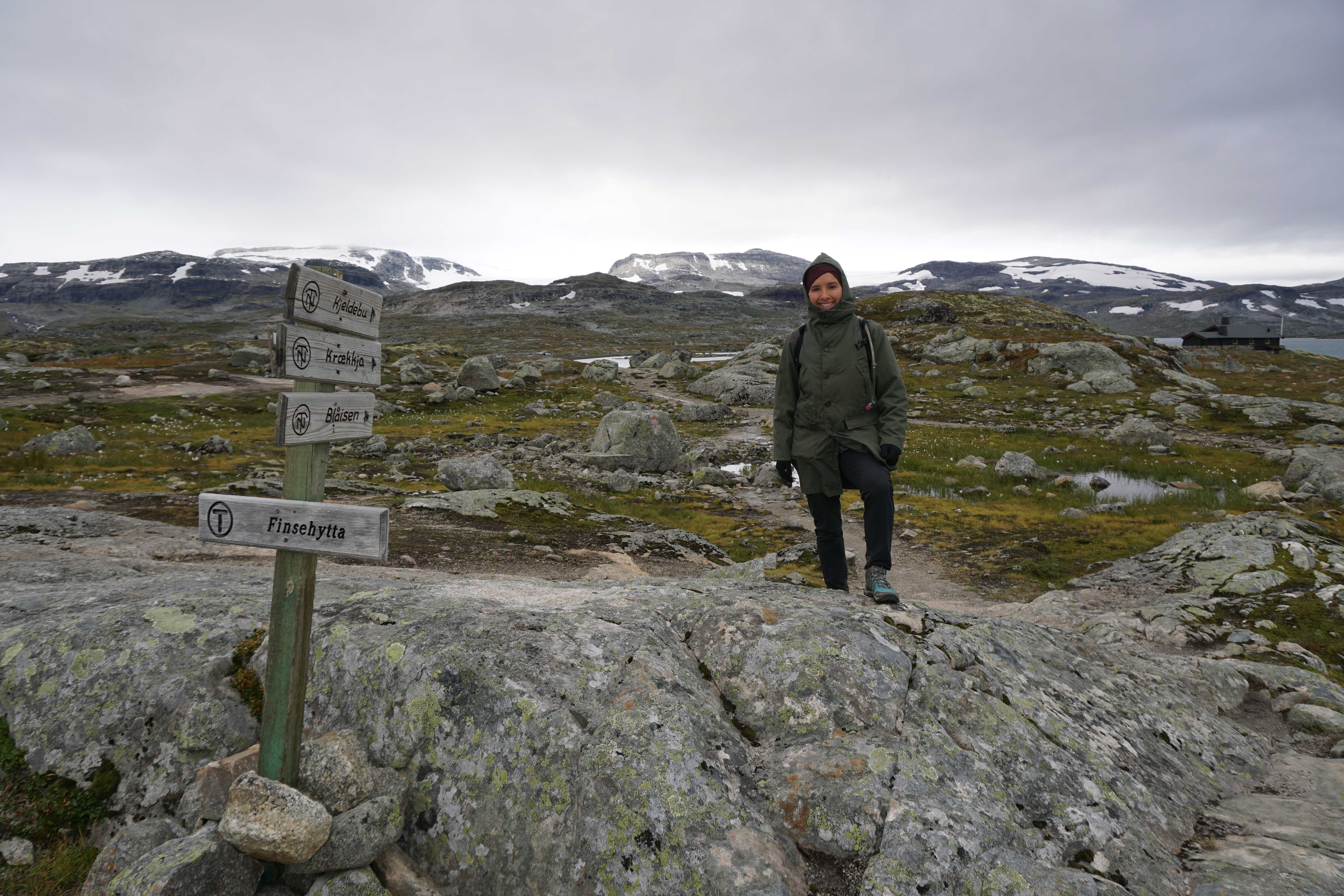 Getting closer to the glacier

Even in August, the weather was unpredictable. At this elevation, we went from low fifties near the cabin, to nearly freezing as we made our way along the hike – we even experienced some sleet at the foot of the glacier. 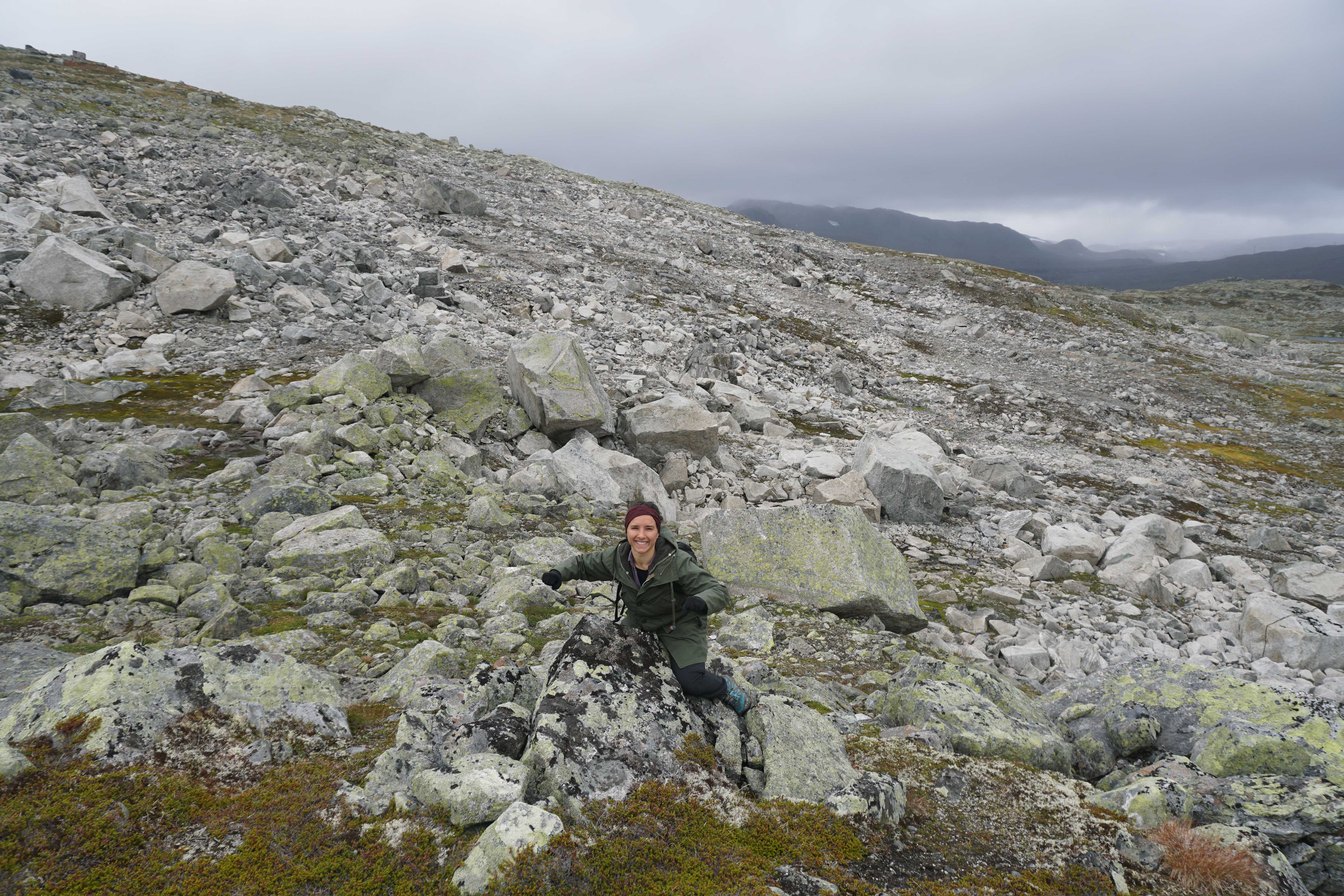 After 3 miles of rugged terrain and river crossings (which took nearly 2 hours, one way), we made it to the Galaxy’s Edge: we were on Hoth! 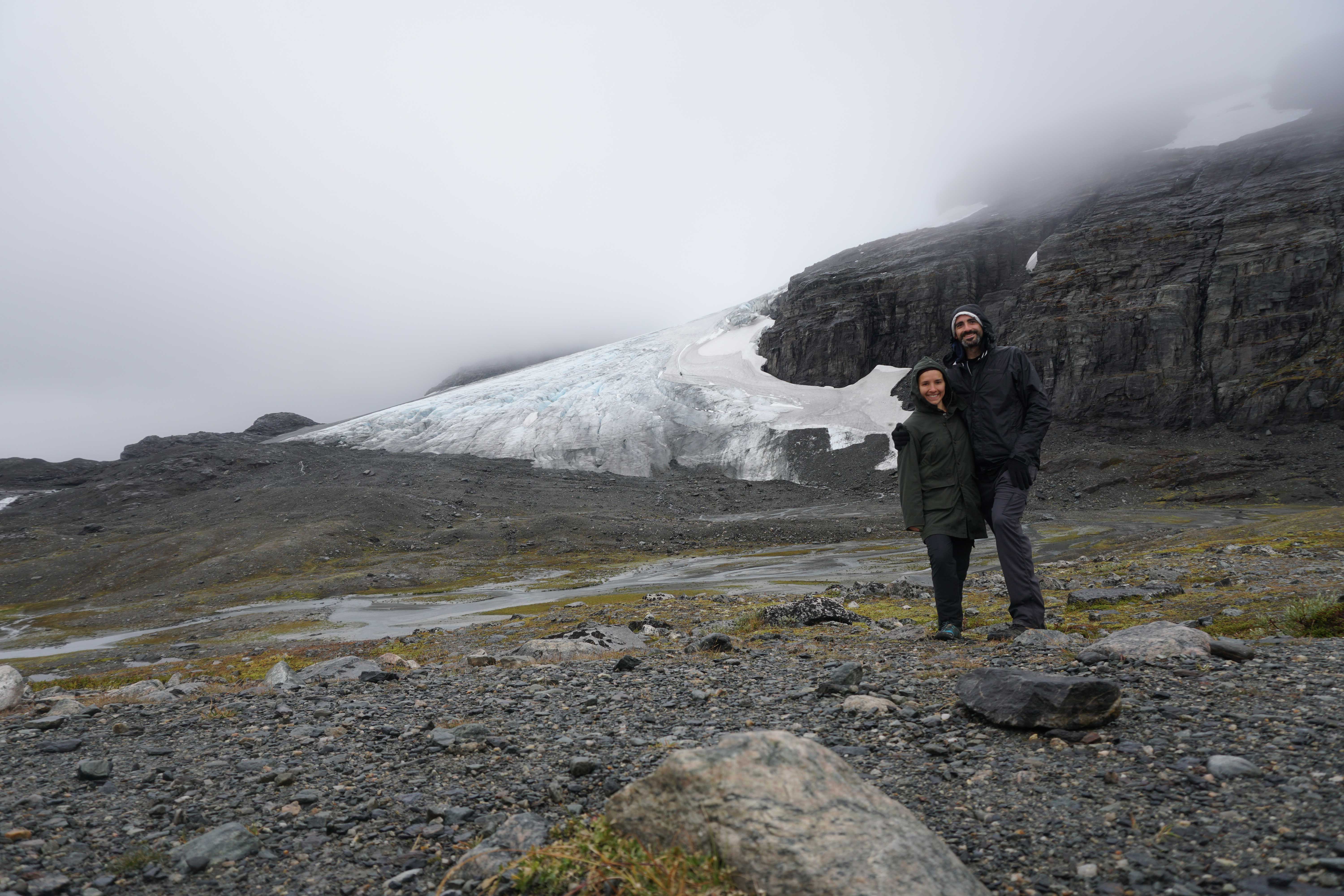 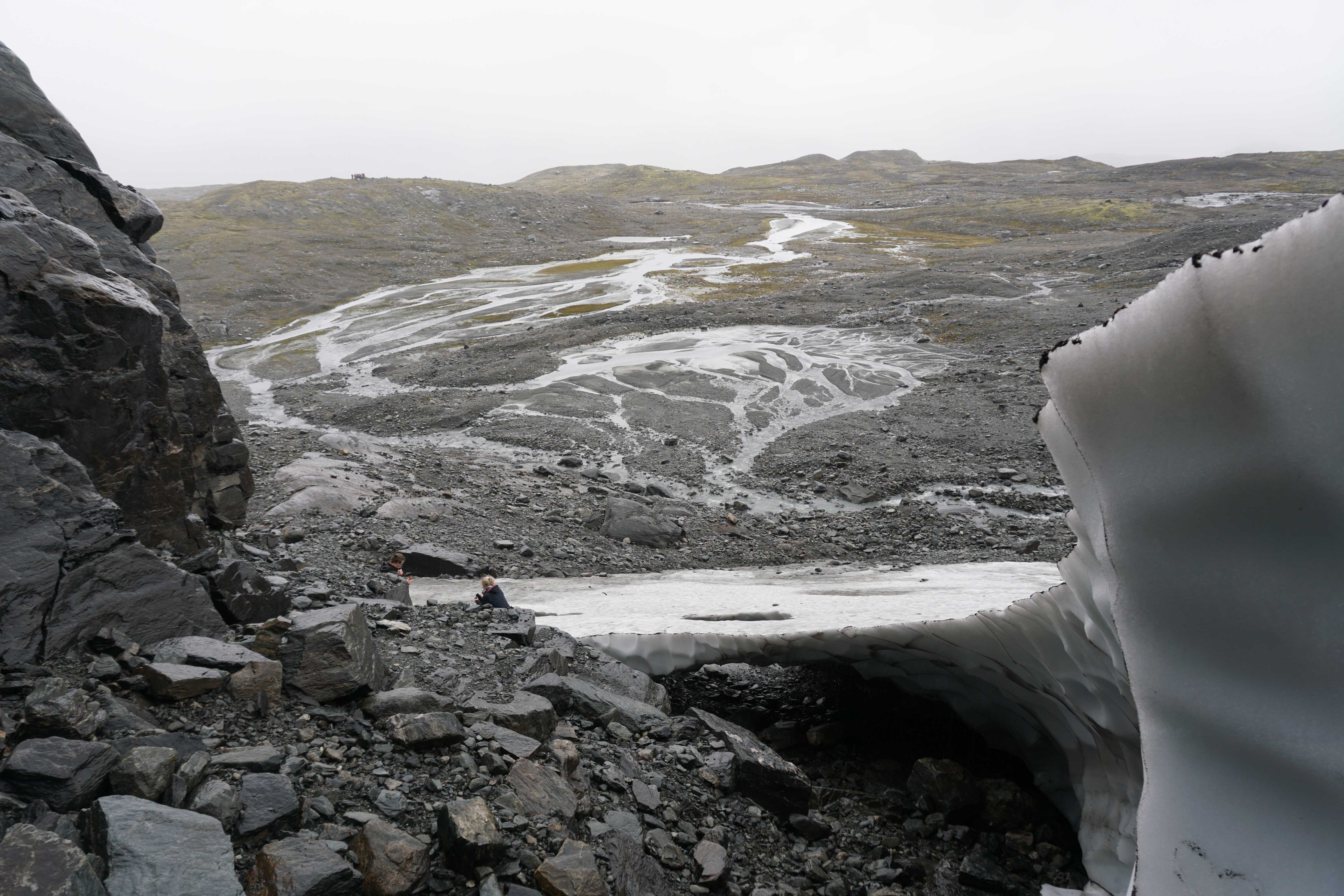 Our view from the edge of the glacier, watching the water run down into the valley

Unfortunately, this is as far as we could go: not a Tauntaun, Wampa, or AT-AT in site, but we knew we were there. We paid our respects to those who lost their lives fighting The Empire on this battle-site, then backtracked towards the lodge.

You must come along now R2. There’s really nothing more we can do. And my joints are freezing up. 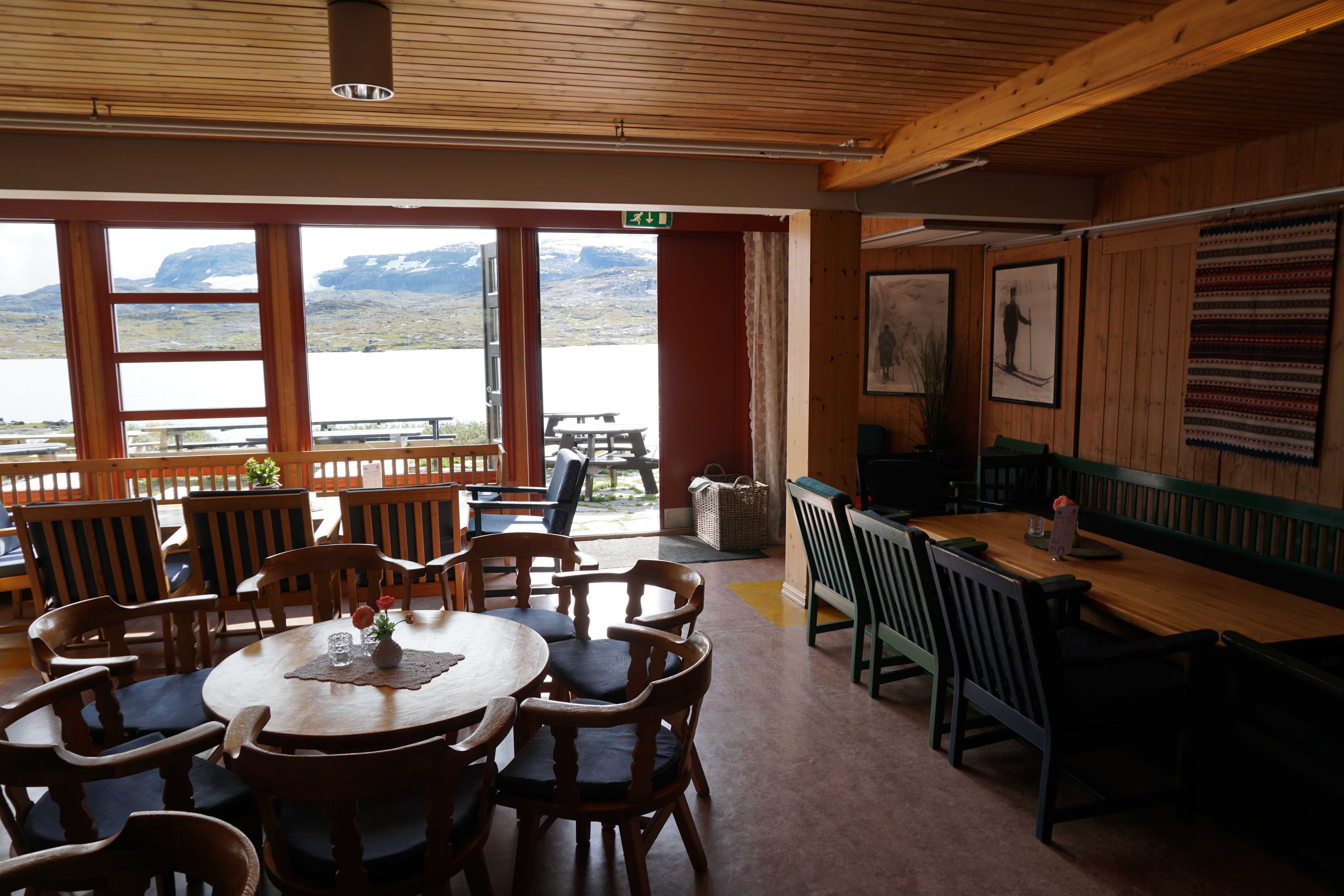 We warmed up, skål‘d with some Finse 1223, and had just enough time for a shower before catching our train on to Oslo.

We really enjoyed our Finse adventure and would recommend it to anyone looking to experience the great outdoors while getting a healthy dose of Disney. If you ever plan to go to Norway, be sure to visit Hoth while you can! 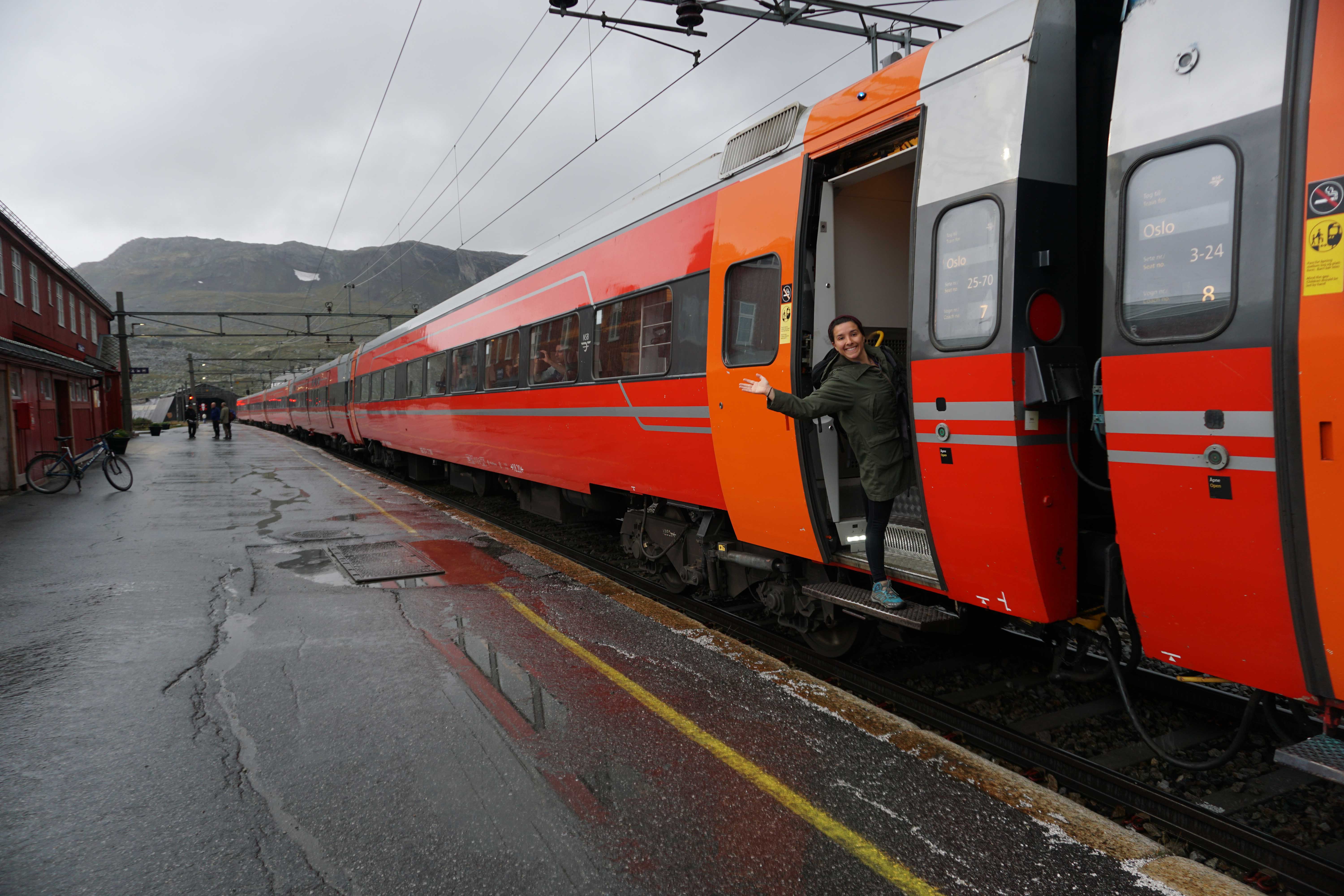