A Tour of The Jim Henson Exhibit: Imagination Unlimited

A Tour of The Jim Henson Exhibit: Imagination Unlimited

This review reflects our visit to the Henson traveling exhibit at the Mississippi Arts and Entertainment Experience.
This same exhibit will be shown next at The Henry Ford Museum beginning June 4, 2021.

Jim Henson has touched all of our lives at one point or another: Big Bird taught you your ABCs, you wondered if Nanny had a face, you swooned over Jareth, you know every word to Rainbow Connection, or you’re Waldo C. Graphic’s number one fan. If you can relate to any (or all) of these, I highly suggest checking out the Jim Henson Exhibition: Imagination Unlimited. Read on for our review! 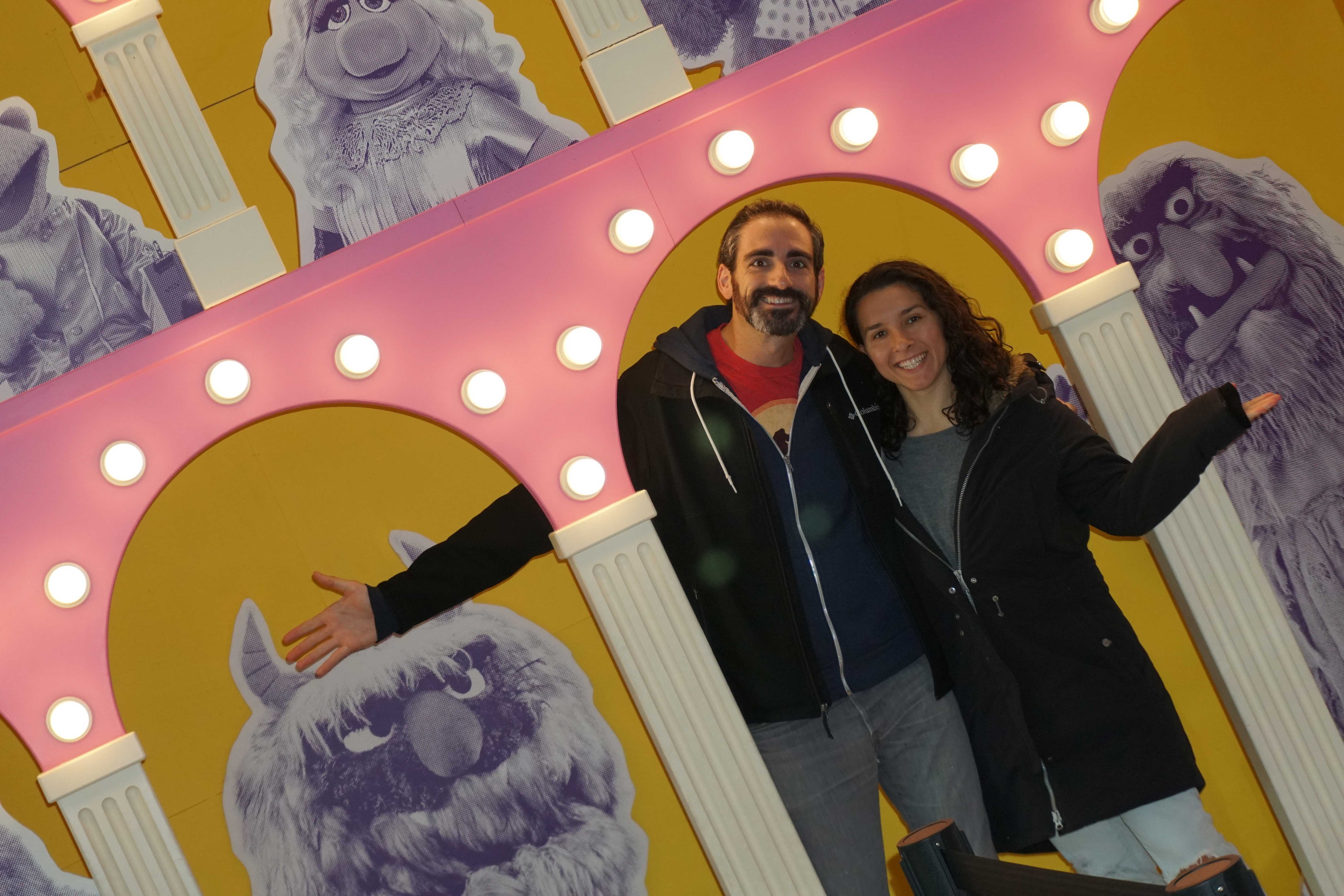 It’s time to meet the Muppets!

As children, we all live in a world of imagination, of fantasy, and for some of us that world of make-believe continues into adulthood.
– Jim Henson

This exhibit is a traveling extension of the Museum of the Moving Image‘s permanent Jim Henson Exhibition, which made its traveling debut in 2017 at Seattle’s Museum of Pop Culture. We caught it during its stop at the Mississippi Arts and Entertainment Experience, a location that’s especially meaningful as it’s only a 3-hour drive from Henson’s home town near Leland, MS where a small museum devoted to The Frog (and the man under/in/behind it) stands today. 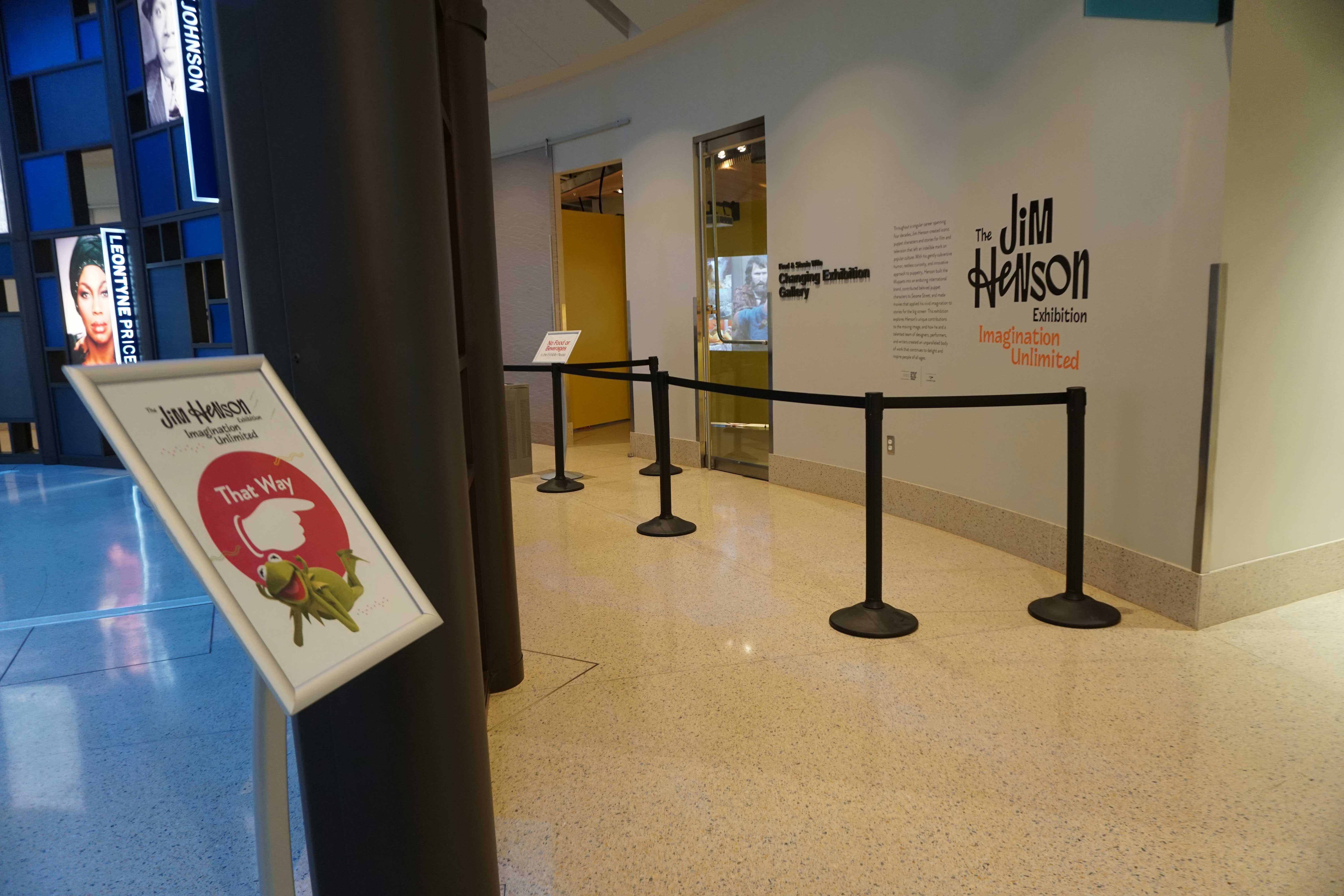 The entrance to the temporary Jim Henson exhibit at the MAX

The exhibit explores all aspects of Henson’s professional life, from his early days working on commercial projects through his last major production before his untimely death in 1990.

An original Kermit the Frog puppet greets visitors to the first room, making the price of admission already worth it. He’s just one of 20 authentic puppets on display in addition to hand-drawn sketches, scripts, costumes, memorabilia, and interactive displays in the colorful and modern museum space. 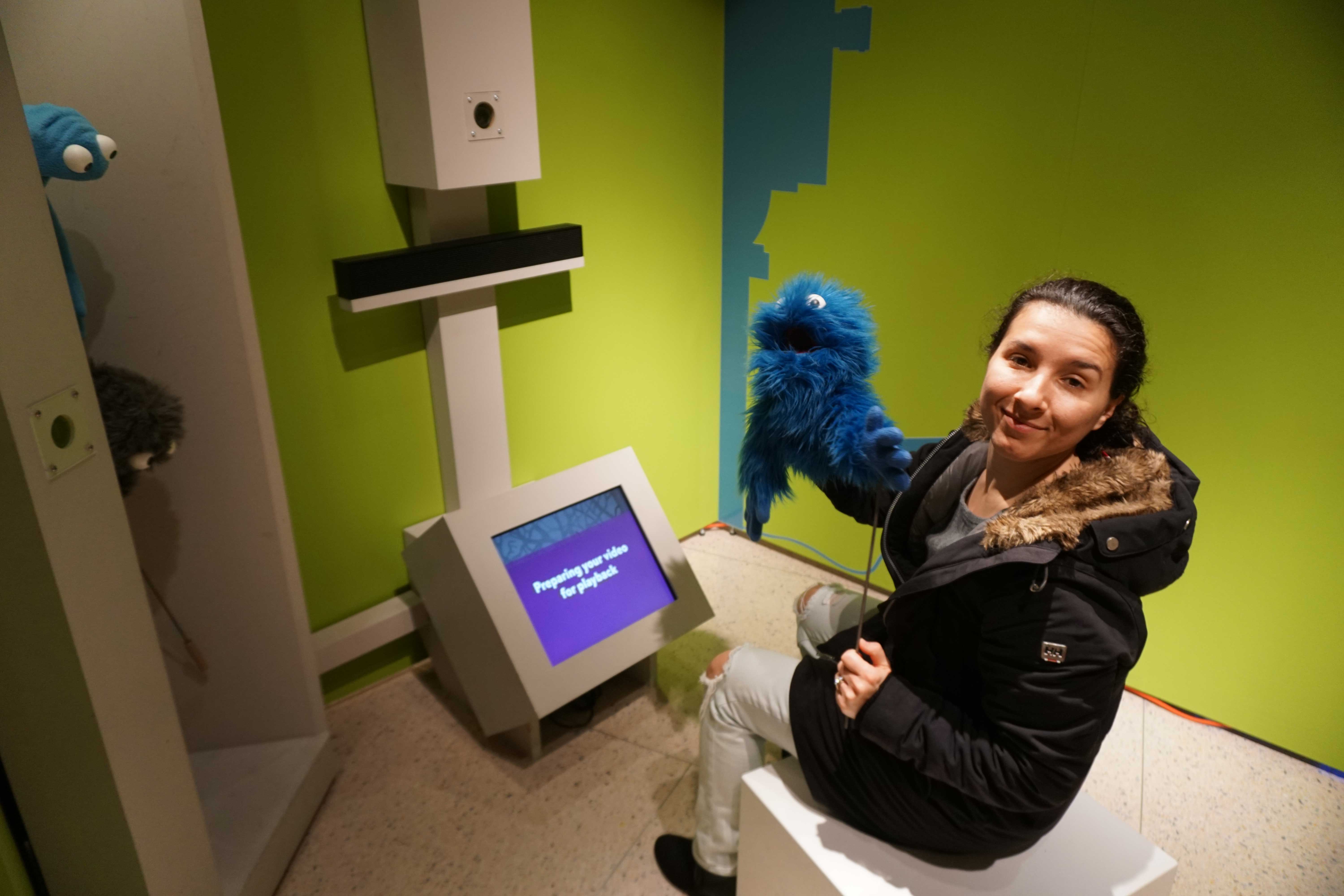 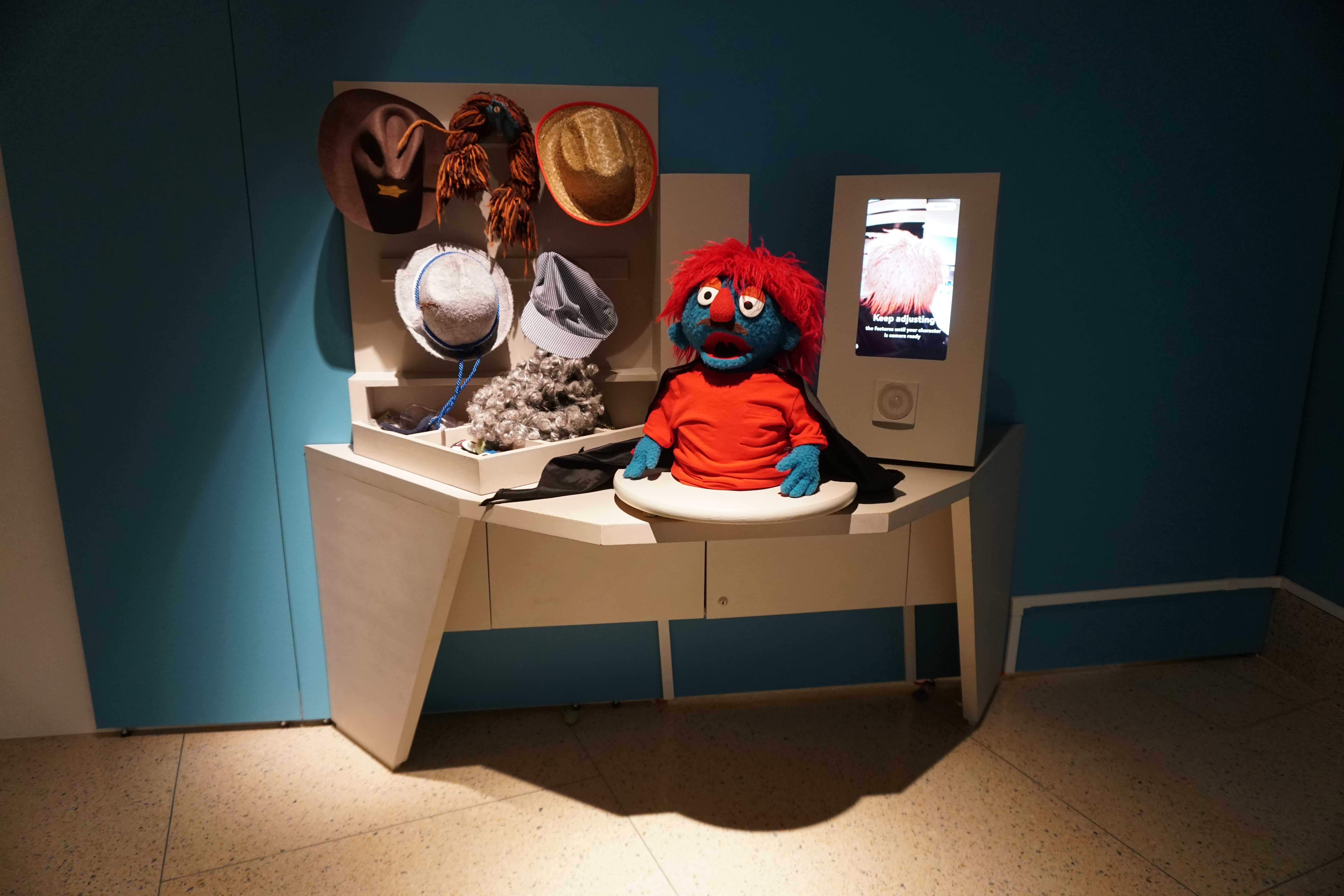 Practice your puppet creation skills by creating your own “Anything Muppet”

Moving further into the exhibit, we get to the Sesame Street portion – one of my favorites. As a kid, I was glued to the TV when it came on. I watched it well into elementary school and it even inspired a short-lived, third-grade dream of becoming a puppeteer. 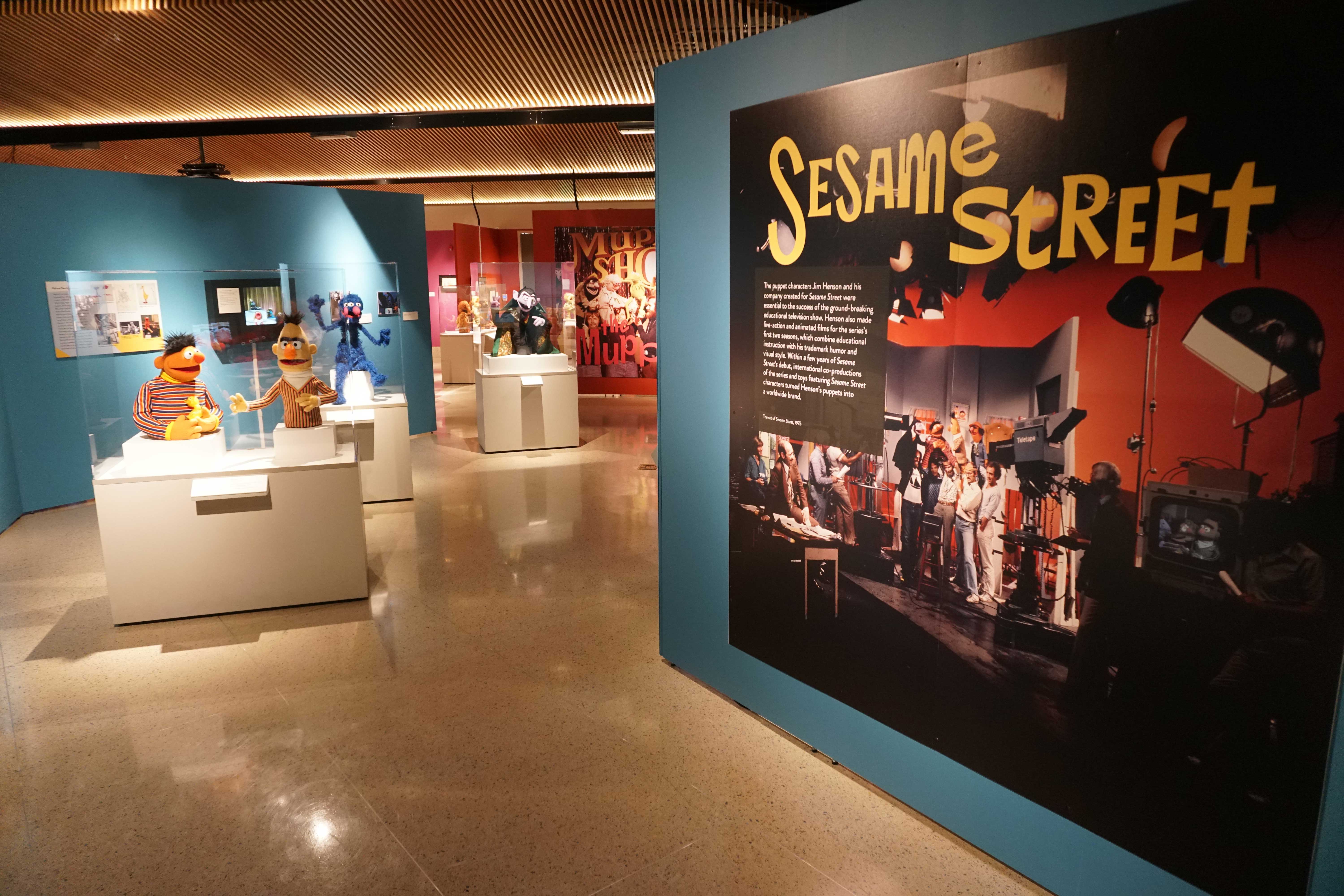 Can you tell me how to get…

Seeing all of my childhood friends, live and in-person, gave me goosebumps. Very different from seeing the walkaround characters at Sesame Place and during Sesame Street LIVE; Seeing the full-sized, screen-used hand puppets right in front of your eyes gives you a sense of scale for the characters you grew up with. They’re actually much larger than you expect, as we’ve been conditioned to only seeing them in small, plush toy form. Ernie, Bert, Rubber Duckie, Grover, Count, and even Slimey the Worm are all on display, ready to be ogled at and photographed.

The next area gets into The Muppets (an entity of Henson’s creations that has been owned by Disney since 2004) and Jim’s later works like Fraggle Rock, The Dark Crystal, and Labyrinth. 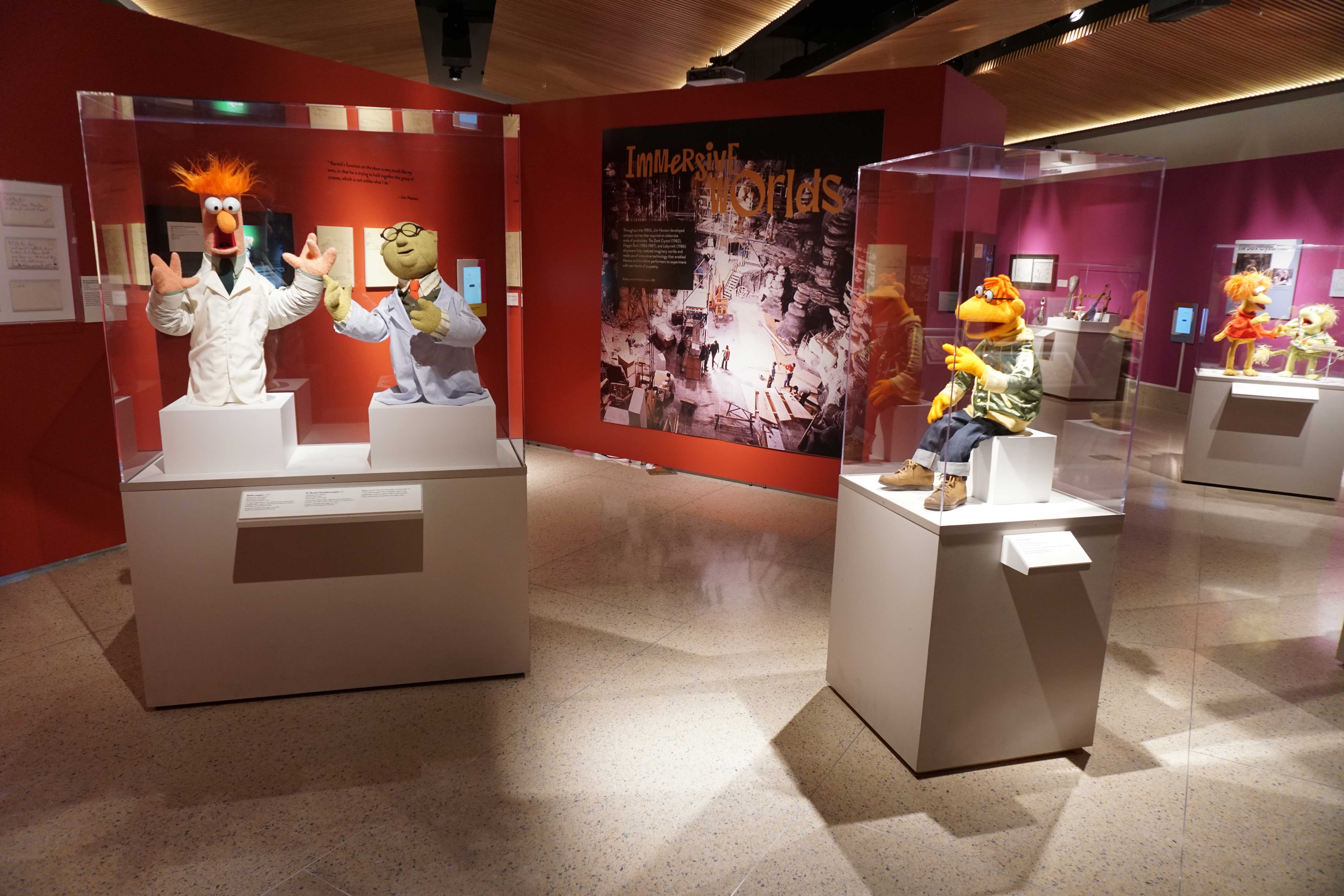 Our favorite Muppets, right in front of us!

The Beaker, Honeydew, and Scooter on display are from 1977, 1976, and 1975, respectively, likely to have been seen during the early years of The Muppet Show and maybe even used for The Muppet Movie. Sadly, the display plaques only state their year of creation, but no record of where or when they were used on screen.

Nearby, we found a The Muppets Take Manhattan comic book on display, issued by Marvel Comics in 1984 to promote the film of the same name. We found this pretty interesting as Disney now owns both of these entities – it’s like future-synergy-inception. Really mind-blowing stuff! 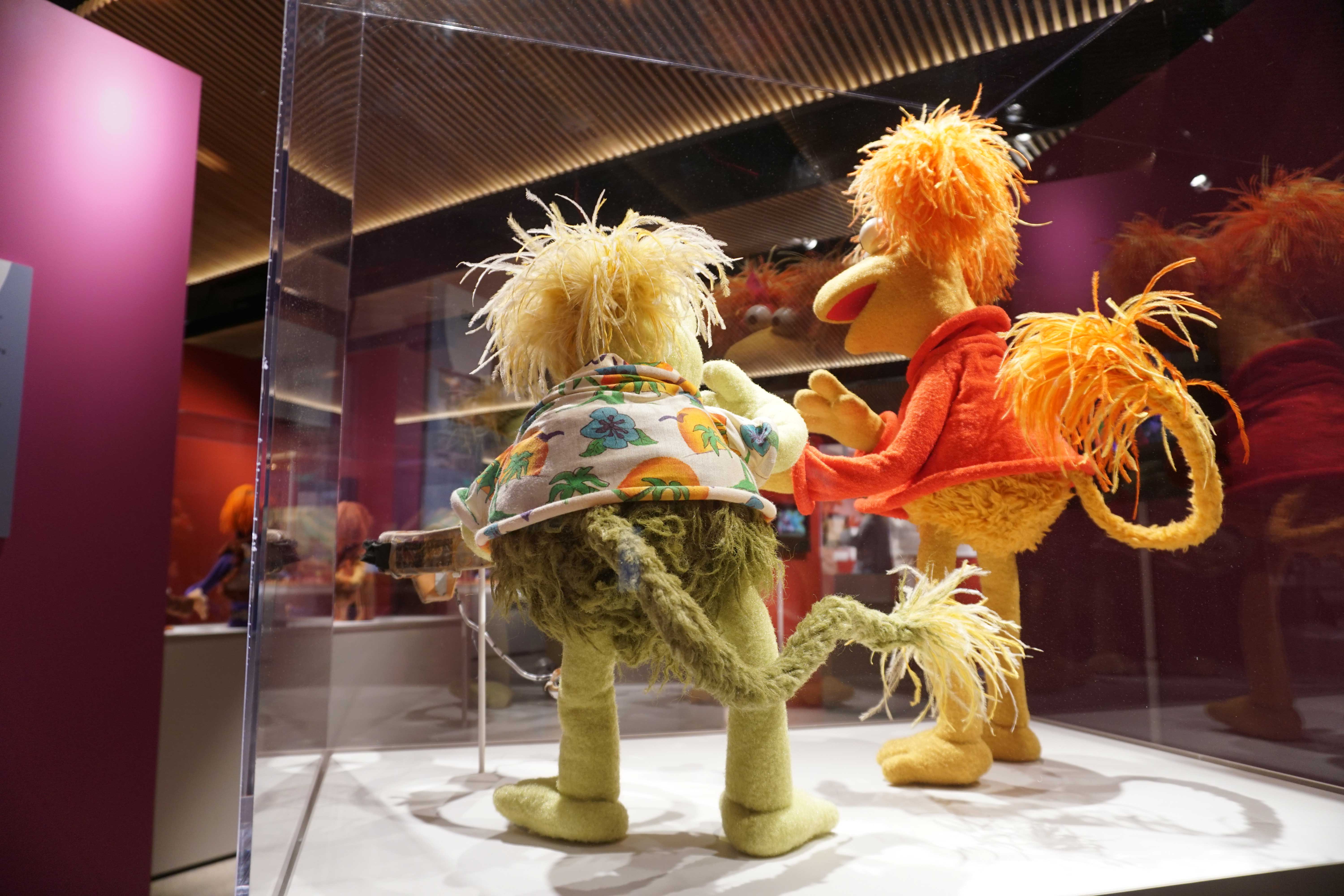 Another Muppet of note here is the “Jim Henson” puppet. Jim, along with “Franz Oz” and “Jerry Nelson” were first built in 1971 for an appearance on The Perry Como Winter Show as a musical trio, performed by their respective puppeteers. The trio popped up again on The Dick Cavett Show and a handful of episodes of The Muppet Show.

It’s pretty amazing how these things are formed so simply with carved foam and dyed ostrich feathers making up the hair and beard. I always look for the portrait of this version of Jim every time I go to Muppet*Vision 3D, it’s hanging in the rafters of the pre-show room. Check out a photo of it on this page. 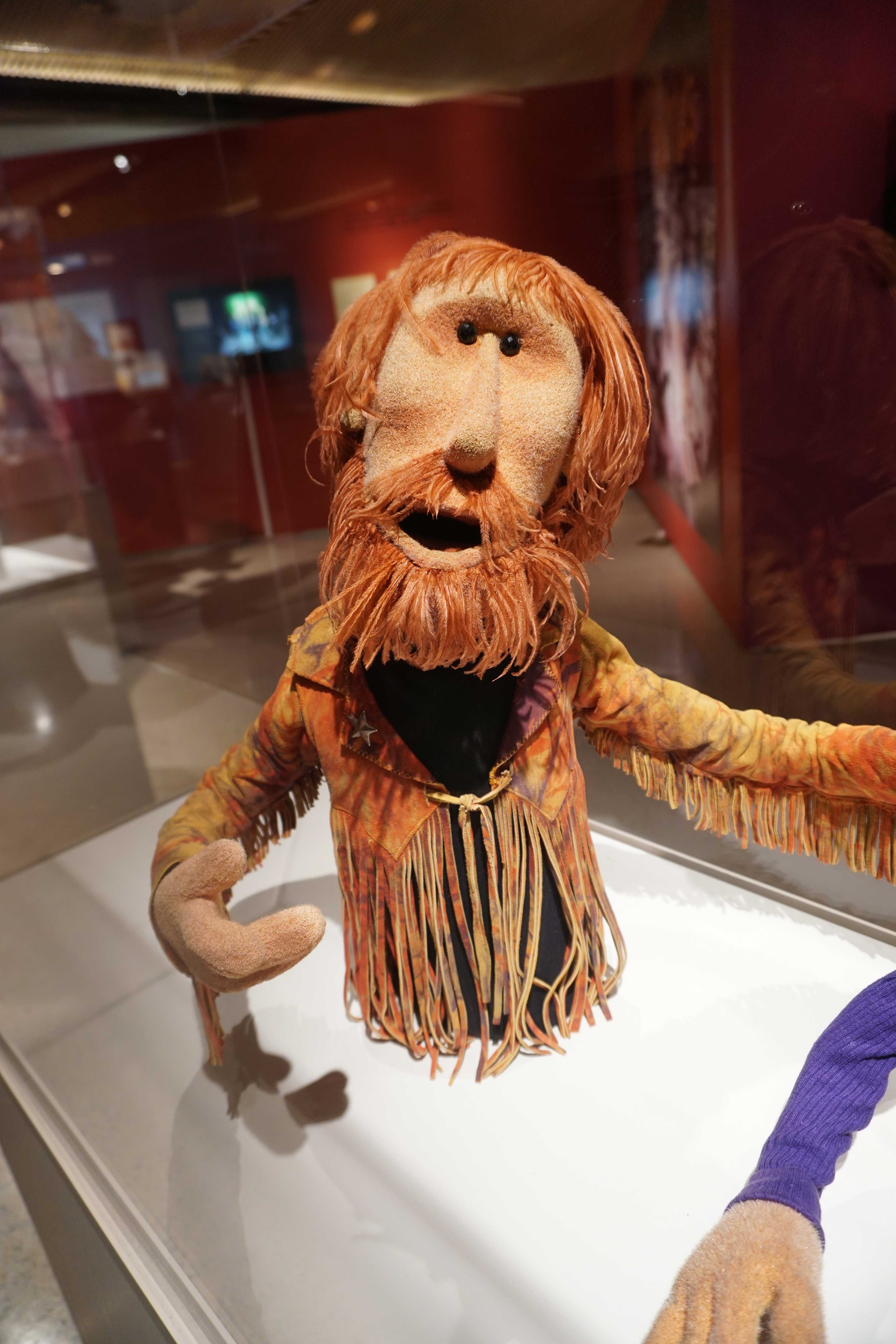 A close-up of the Jim Henson puppet

The exhibit starts to wrap up with Henson’s later works, experimenting with new technology and techniques, such as green screen and robotics. Similar to the exhibit at the Museum of the Moving Image, a “Waldo” puppet control mechanism is featured here. The mechanism was developed in order to let puppeteers remotely operate mechanical puppets like those found in Fraggle Rock and Dinosaurs. A later version of this was used to perform Waldo C. Graphic, the “spirit of 3D” who stars in Walt Disney World’s Muppet*Vision 3D. 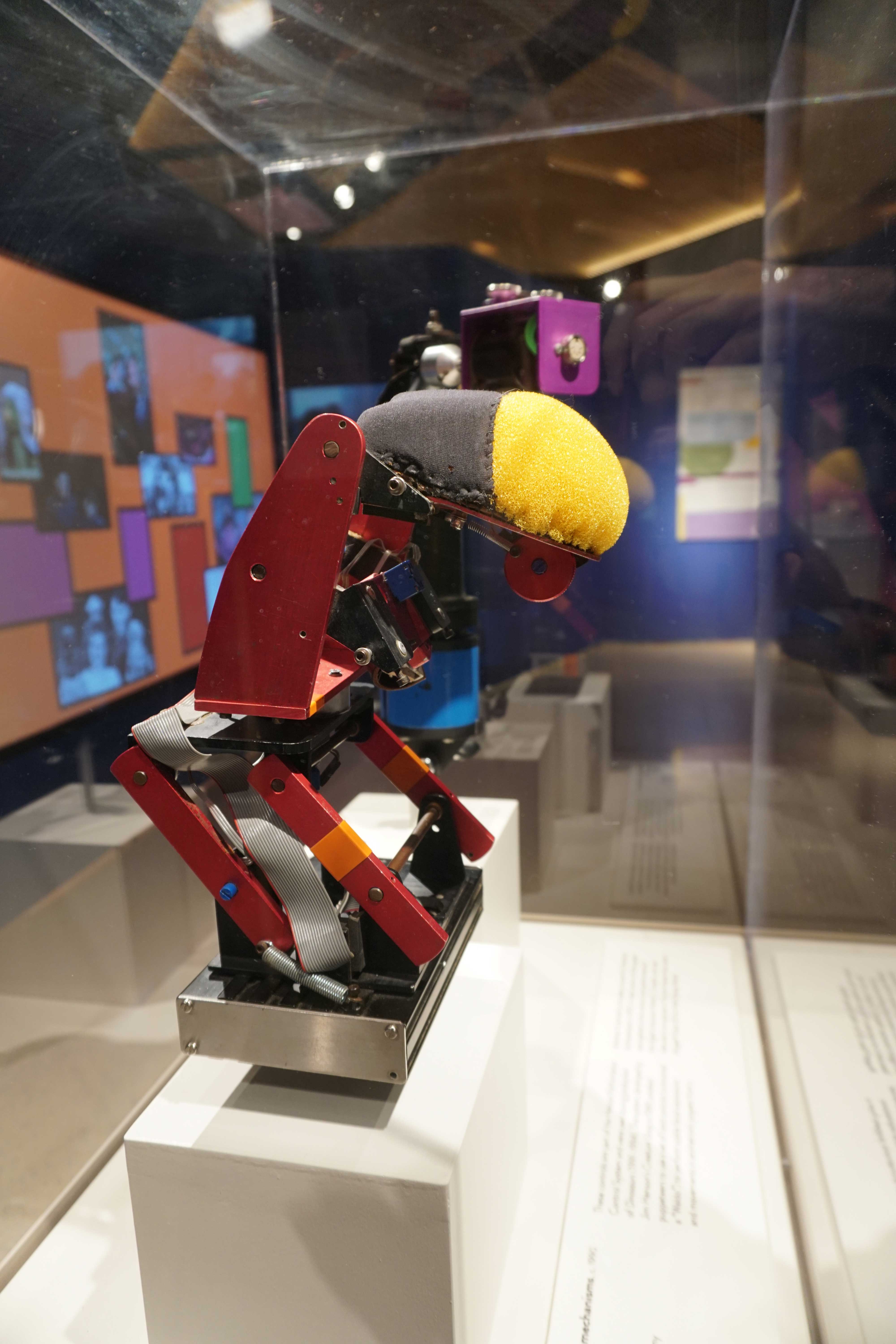 Waldo, the mechanism of 3-D!

Fans of Labyrinth and The Dark Crystal will be happy to find puppets and props from these cult films here too. Both movies were created and directed by Henson in the 1980s when he started moving into darker and more realistic fantasy themes. Among the artifacts were the costumes worn by David Bowie and Jennifer Connelly during the ballroom scene where they danced to As The World Falls Down. 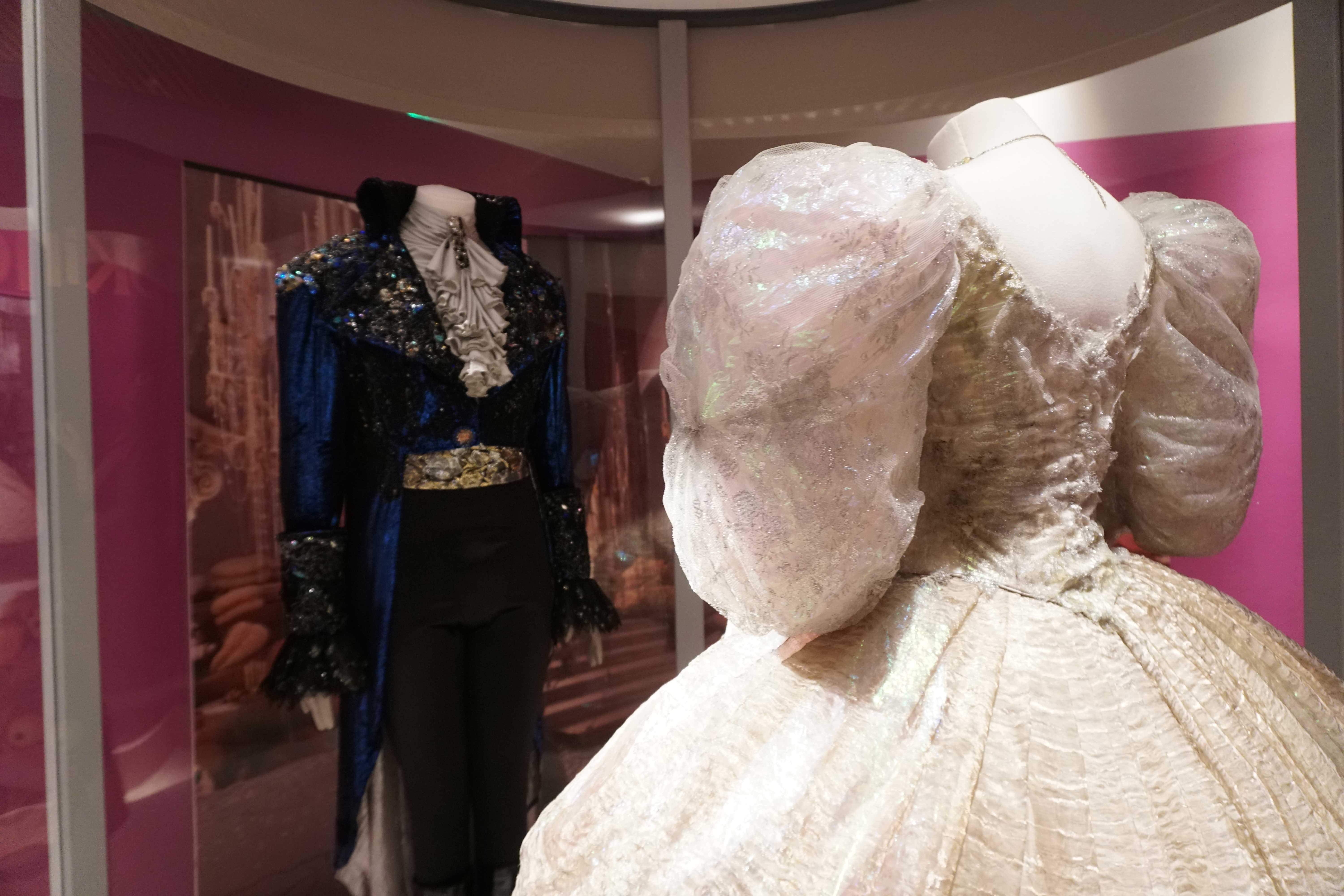 At the museum’s exit, a pop-up style gift shop is nearby to sell you a variety of Henson related merchandise but, sadly, nothing unique to the exhibit.

Don’t worry though, a geolocation Snapchat filter and a flat replica of the iconic set from The Muppet Show’s opening number are available for you to capture memories of your visit. 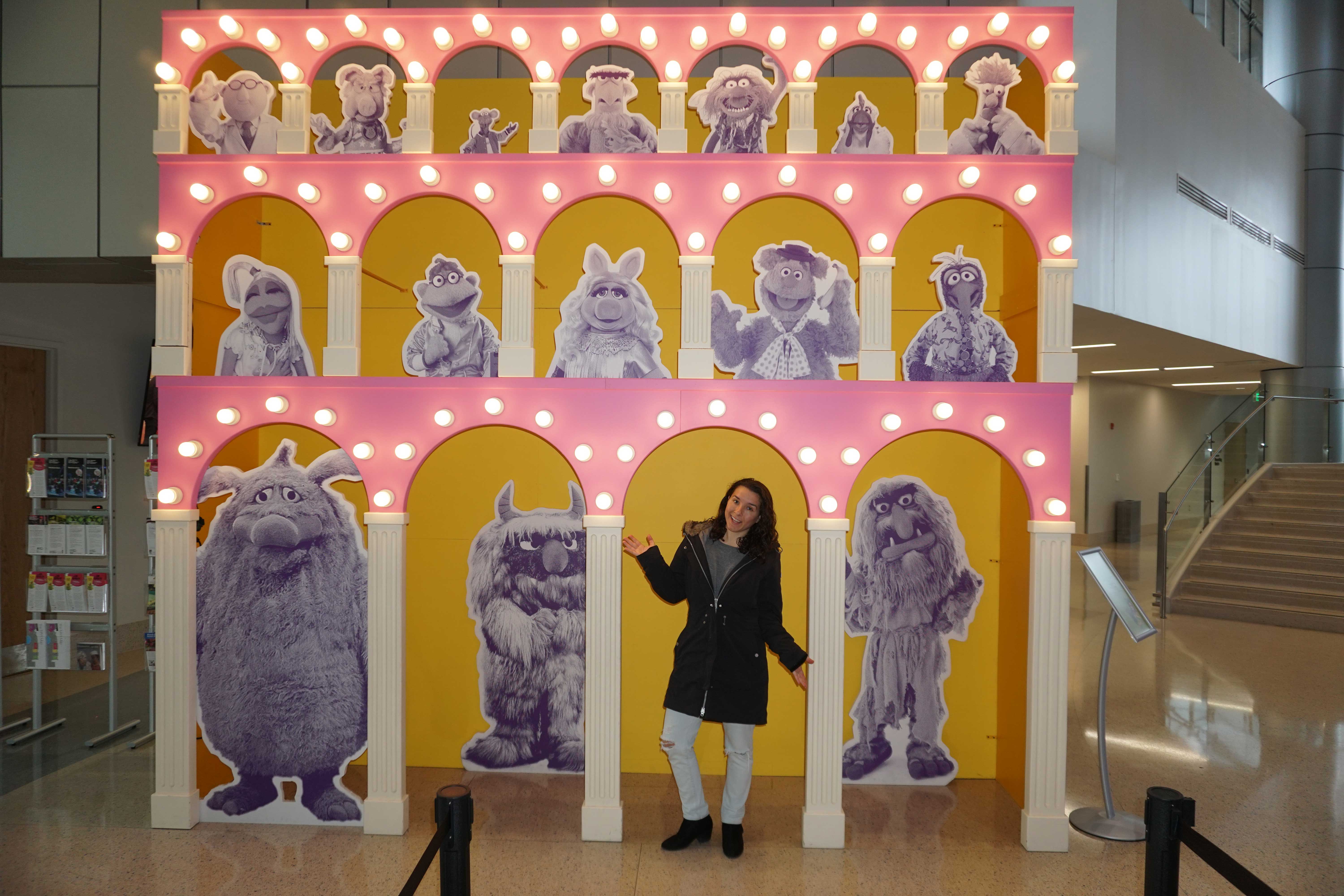 We highly recommend seeing this really great, interactive, and modern exhibit if you can. The touring museum’s next stop will be at The Henry Ford Museum beginning June 4, 2021. See the exhibit’s official website for more information on future stops.