Meeting the Original Winnie-the-Pooh (and Tigger, too)

Meeting the Original Winnie-the-Pooh (and Tigger, too)

Having just seen the new Christopher Robin film on a recent flight to New York City, I felt inspired to visit some old friends while in town.

I had seen them years ago, but it had been a while and I wanted to check up on them to make sure they were in good shape while living in The Big Apple.

I made my way to the main branch of the New York Public Library, a historic building on famed Fifth Avenue, spanning from 40th to 42nd Street. You might recognize its exterior, guarded by two marble lions named Patience and Fortitude, from the 1984 cult classic, Ghostbusters.

The famous lion statues stand guard over the library’s entrance

After passing through the main entrance and a quick security check, I follow signs to the Children’s Center – it’s where my friends have been calling home for over 30 years.

Following the signs to the Children’s Center

The arrows point toward a long corridor, down a winding set of stairs into the basement, and through a narrow hallway. A set of LEGO lions by artist Nathan Sawaya emerged to greet visitors into the brightly colored room. 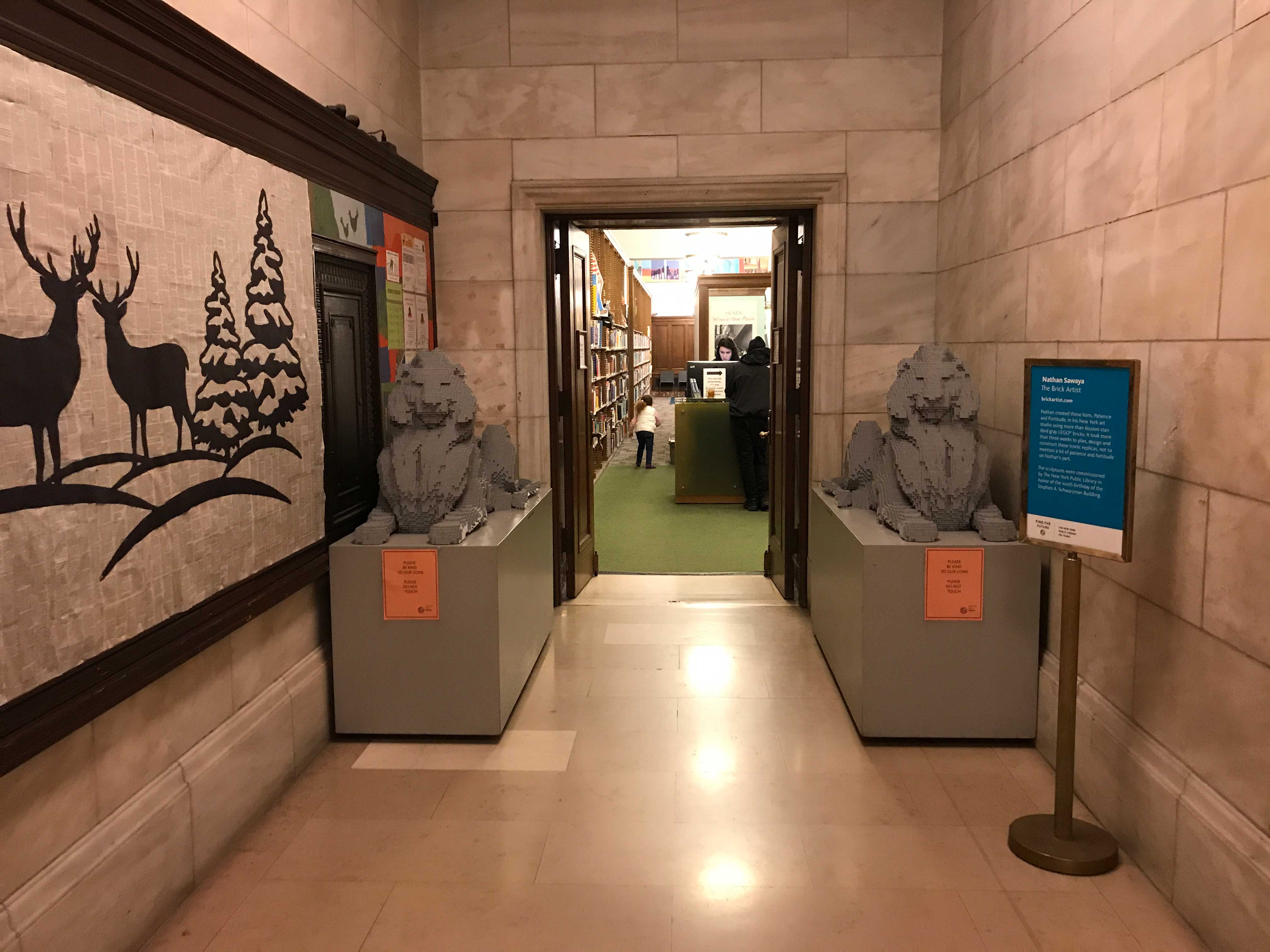 Once inside, it didn’t take long to find my old friends…

The Children’s Center at 42nd Street

There they were! My pals, waiting for me with open arms (as if they had a choice)… 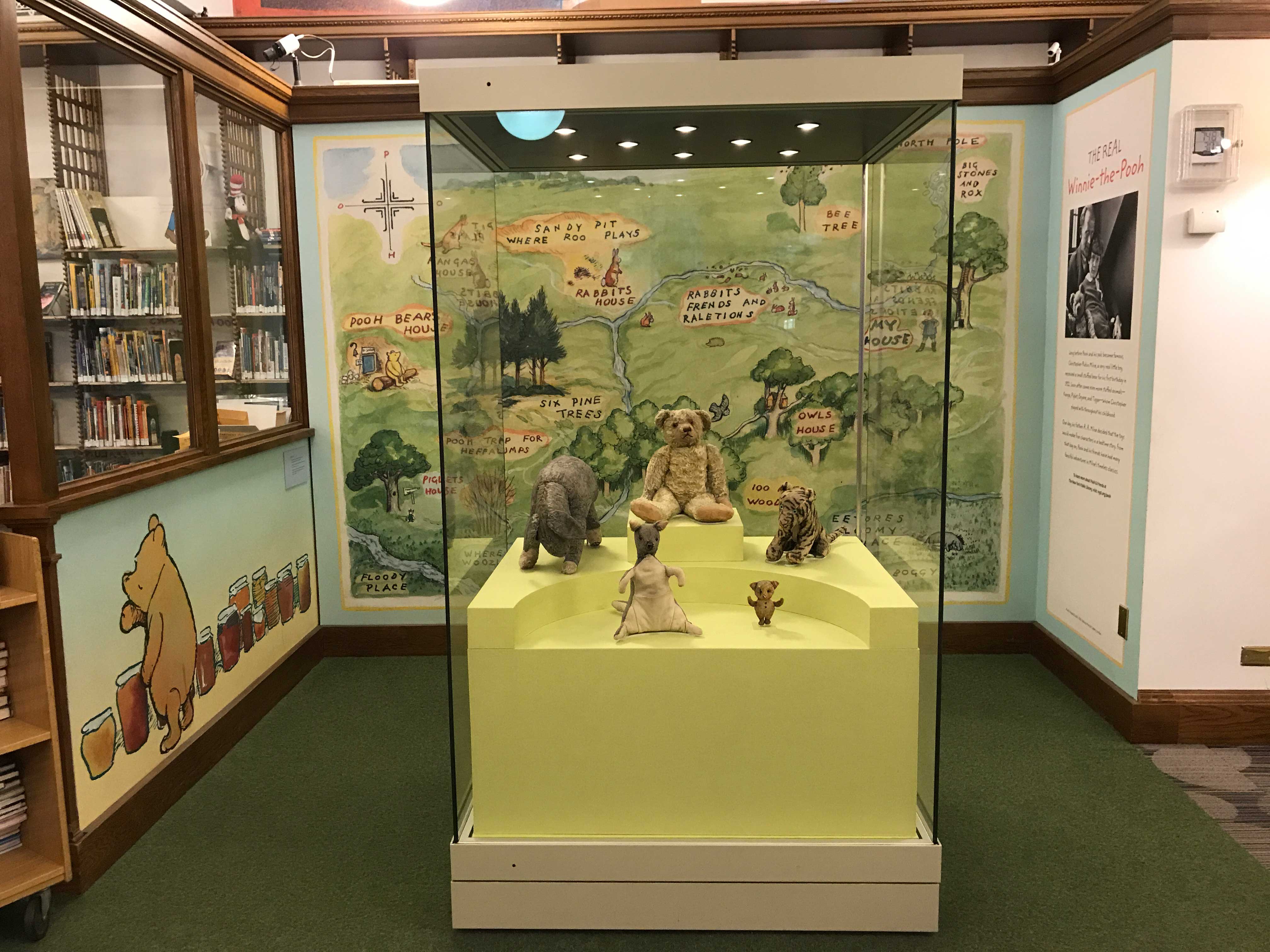 The entire Pooh collection on display

I was standing in front of the original set of dolls that inspired author A. A. Milne to write the Winnie-the-Pooh series of books, the very stories that sparked a massive Disney franchise of movies, TV shows, and theme park rides and experiences since 1961. The gang was all there (except for Roo who was apparently lost in an apple orchard in the 1930s, oh bother!).

This Pooh was first purchased by Milne at Harrods Department Store in London and given to his son, Christopher Robin, for his first birthday in 1921. The rest of the dolls were purchased and given to Christopher over the next seven years. While living in a small farmhouse in Southern UK, Milne penned the Pooh stories based on the landscape and features of the surrounding Five Hundred Acre Wood and his son’s imaginative playtime with his stuffed friends. 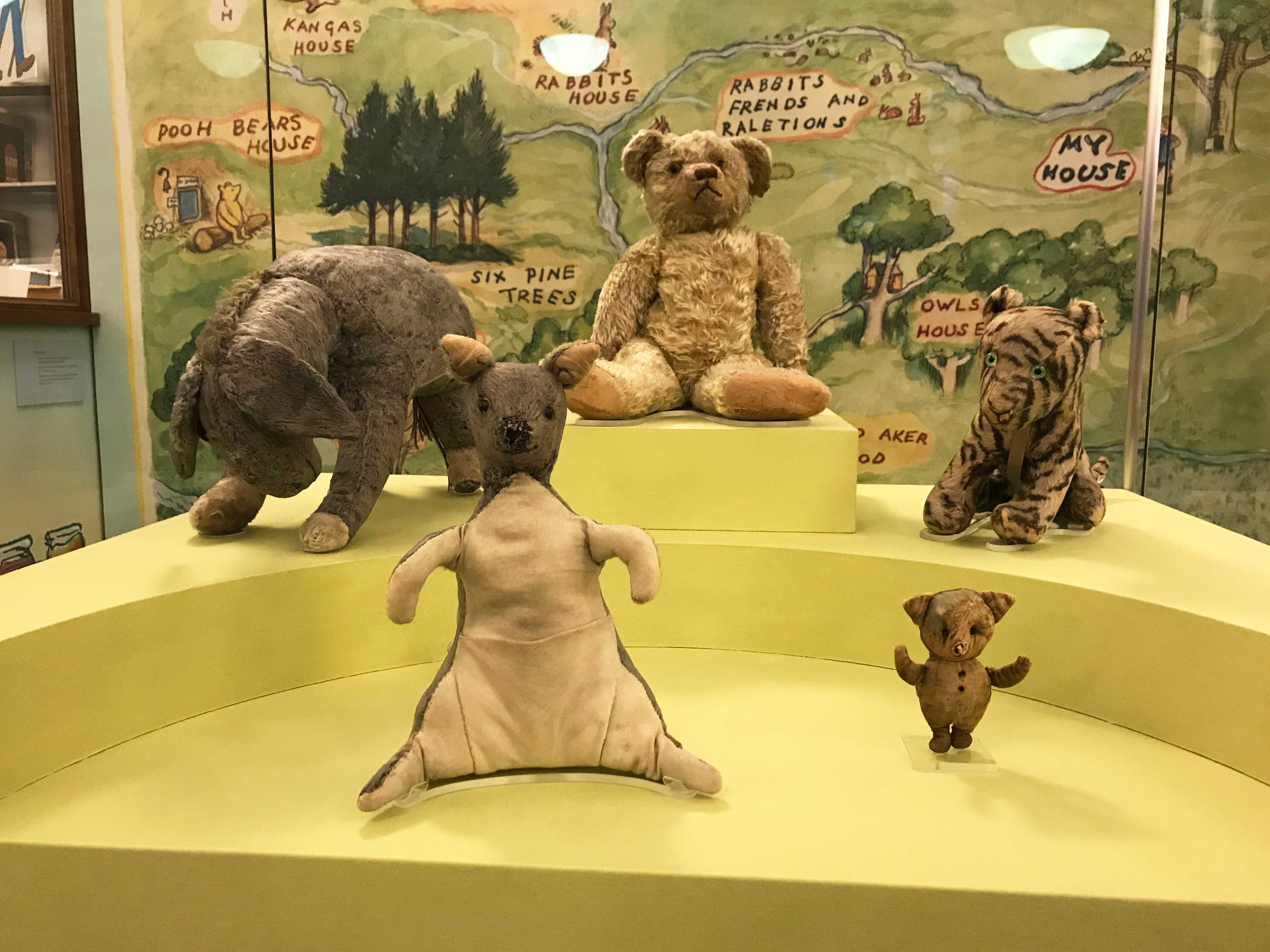 The gang’s (mostly) all here!

In 1947, the dolls were donated by Christopher Robin to the book’s American publisher, E. P. Dutton. The set remained there until 1987 when they were given to the New York Power Authority utility (for some reason) before the collection was turned over to the library later that year. Since then, they’ve been professionally cleaned, restored, and placed on permanent display in the Children’s Center for all to see.

While the dolls don’t look exactly as they do in the new Christopher Robin film, you can see how their personality and charm come through. Pooh’s indifference, Eeyore’s sad stance, and Piglet’s nervous demeanor are all apparent. 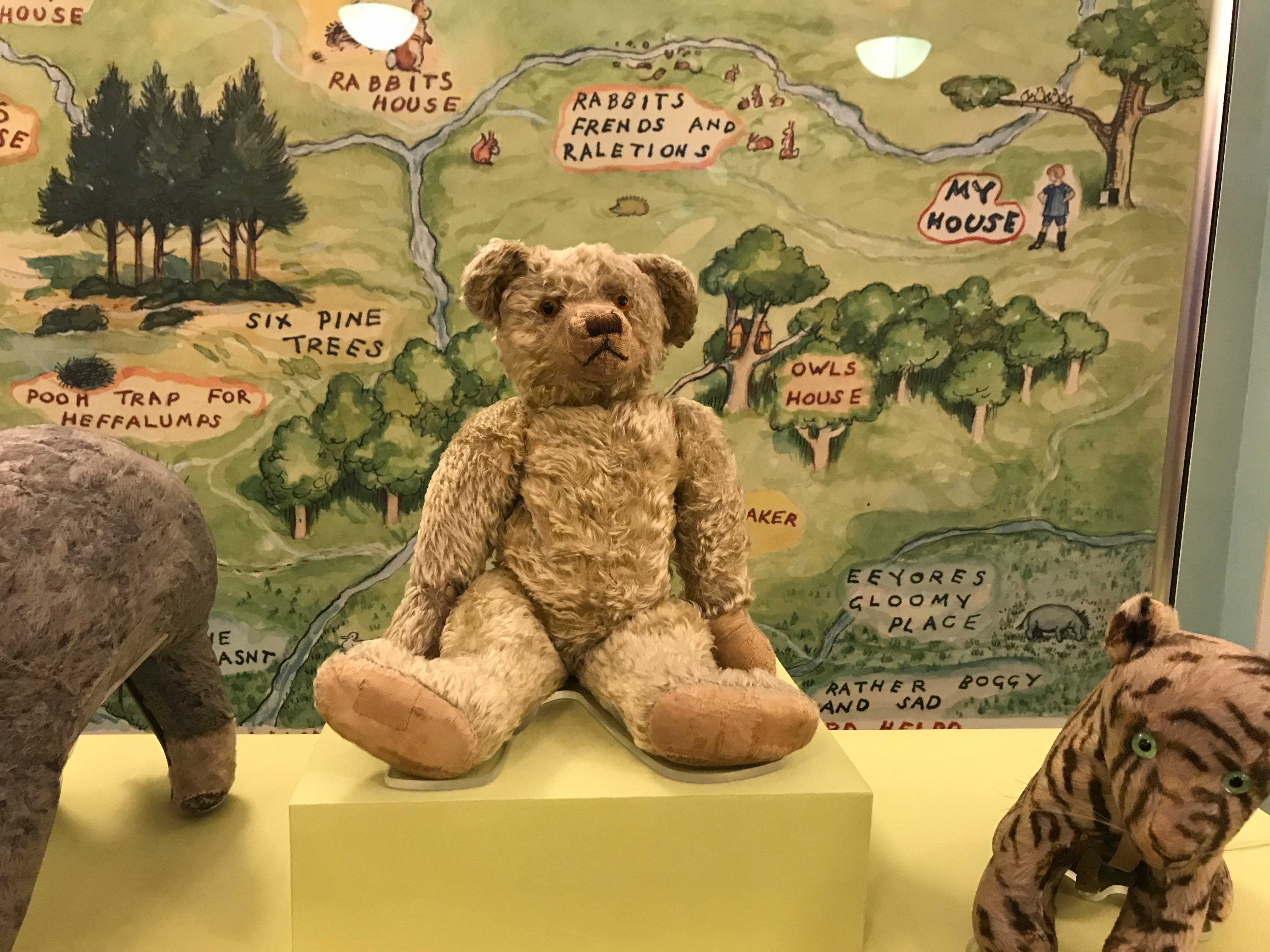 “People say nothing is impossible, but I do nothing every day.” 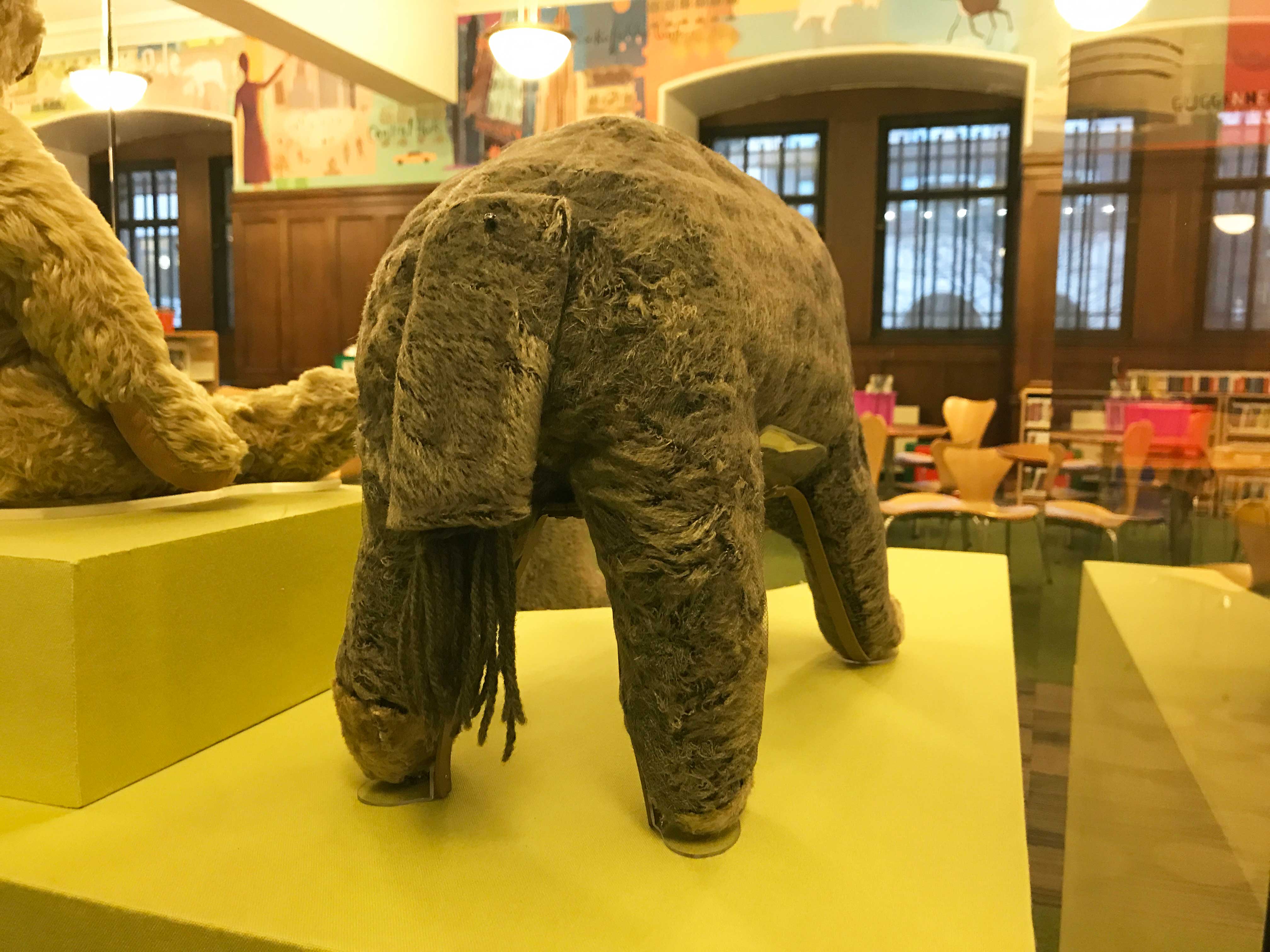 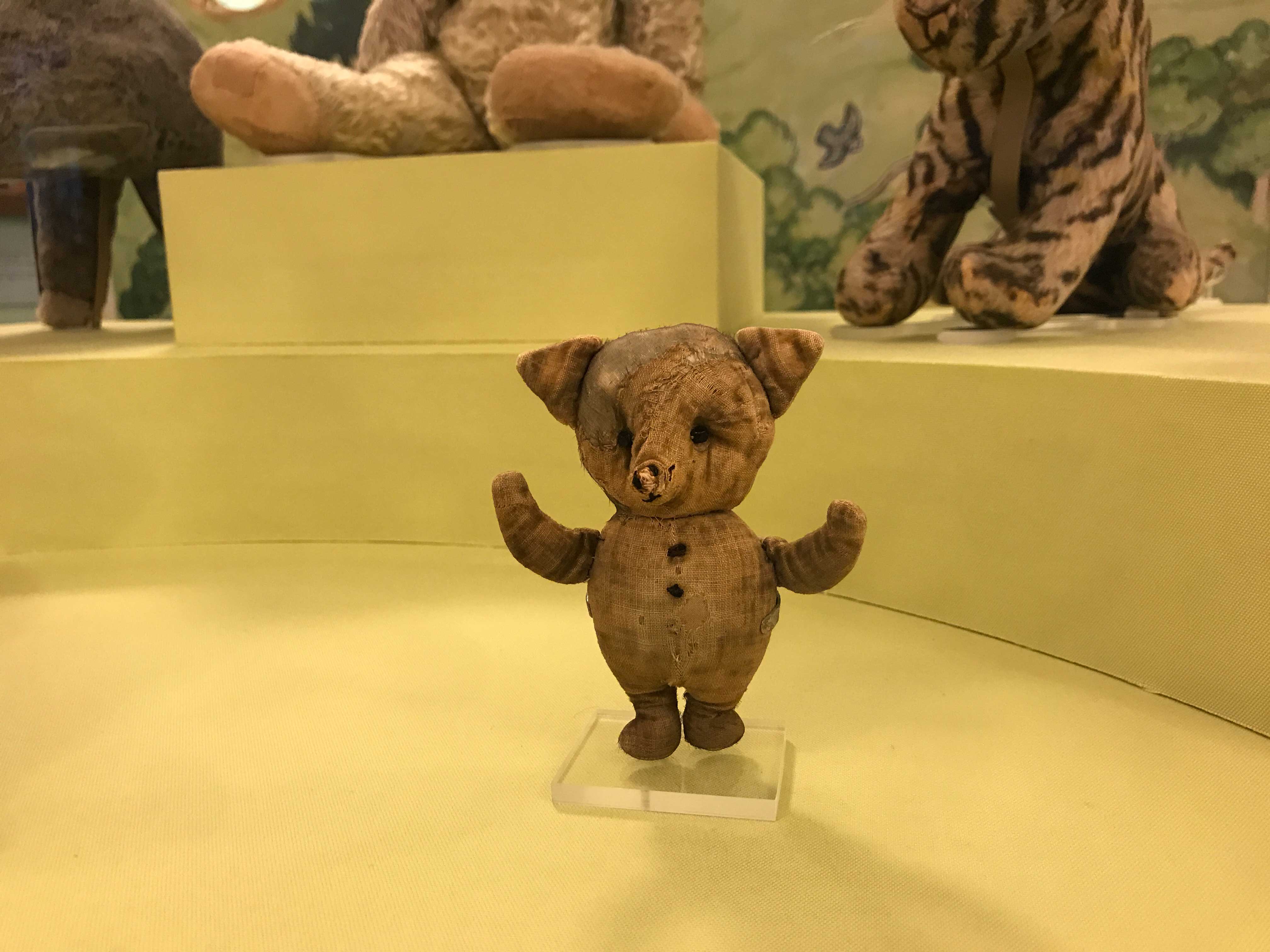 No visit to your local public library is complete without a stop in the gift shop. It’s no different here, where you can find recent publishings of the original Winnie-the-Pooh books along with other children’s stories that inspired Disney franchises, including P. L. Travers’ Mary Poppins and countless classic fairytale stories.

I especially liked the collection by Puffin Books which included beautifully illustrated versions of Beauty and the Beast, Peter Pan, The Jungle Book, and The Little Mermaid. Each book had a display-worthy hardcover with fully illustrated and fun interactive elements inside. A great way to introduce your kids to the literature behind their favorite Disney stories. 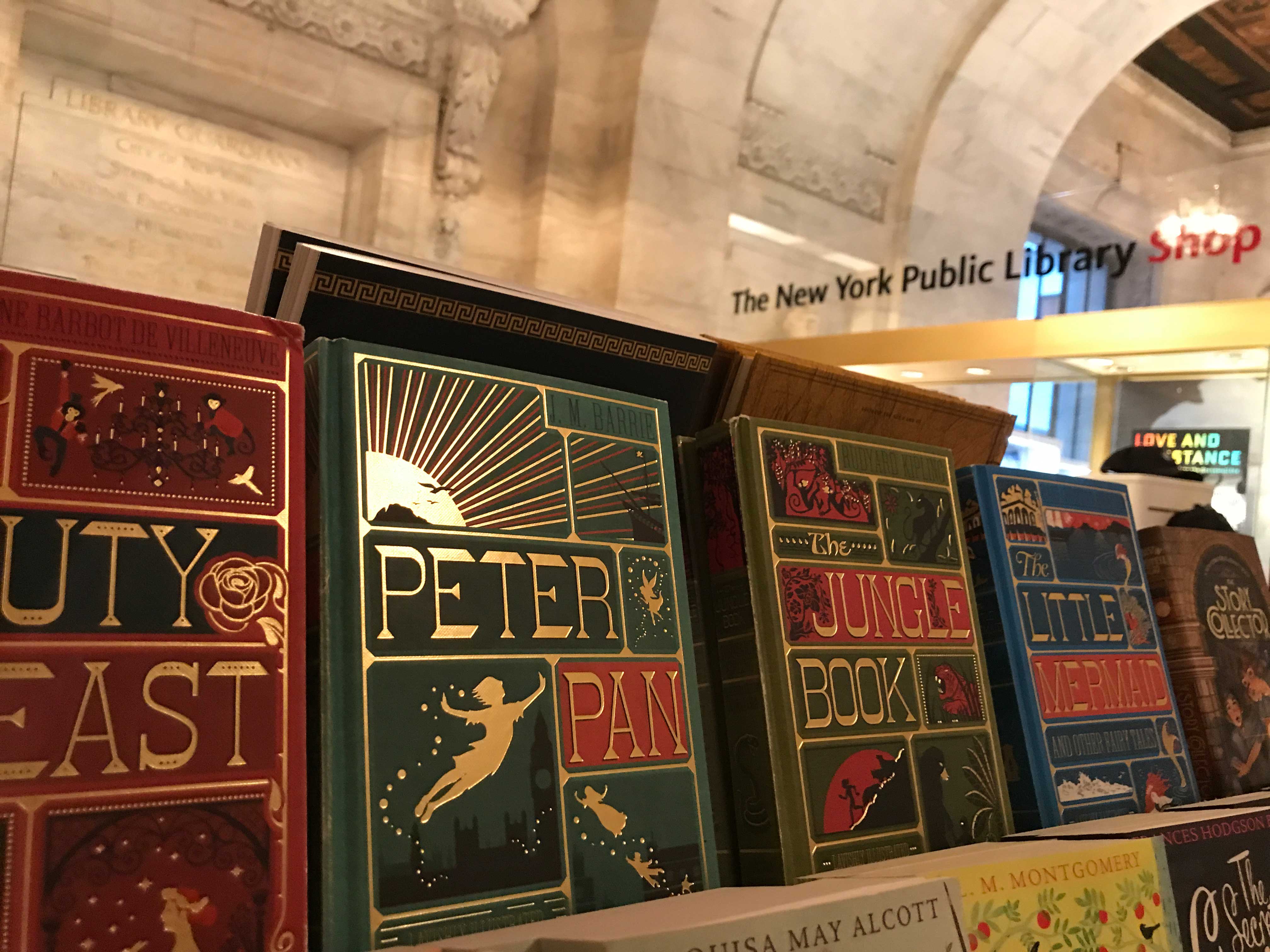 The gift shop did, however, drop the ball by not offering “heritage” style plush versions of the Pooh dolls, like the ones Posh Paws created for the 2018 film. I guess that’s what you get for emphasizing reading over playing with dolls.