The FCU (Frozen Cinematic Universe) keeps expanding, and we’re here for it. In the Disney+ exclusive short, Once Upon A Snowman,  we get to see the untold story of Olaf’s search for a nose and a name. The short cleverly interweaves around the events of 2013’s Frozen, from when Elsa creates our favorite snowman, to him meeting up with Anna, Kristoff, and Sven in the Winter Wonderland (one of Josh Gad’s favorite visuals from the film).

We watched the short a few times and picked up on these five hidden details that we felt were worth sharing! Let us know if you found any more by leaving a comment below! …and CAUTION: MINOR SPOILERS AHEAD!

Clips from the original Frozen aren’t the only form of recycled animation we see in this short film. As Oaken shows Olaf scenes of summer in the stereoscope, we see flashes of the obvious callbacks to the gazebo, bees, and the picnic scene from In Summer – but there are a few other slides that you may have seen before if you’re a fan of Disney animation.

The first is a lush hillside meadow – it’s the same one that Rapunzel rolls down shouting “I am never going back!” in 2010’s Tangled. 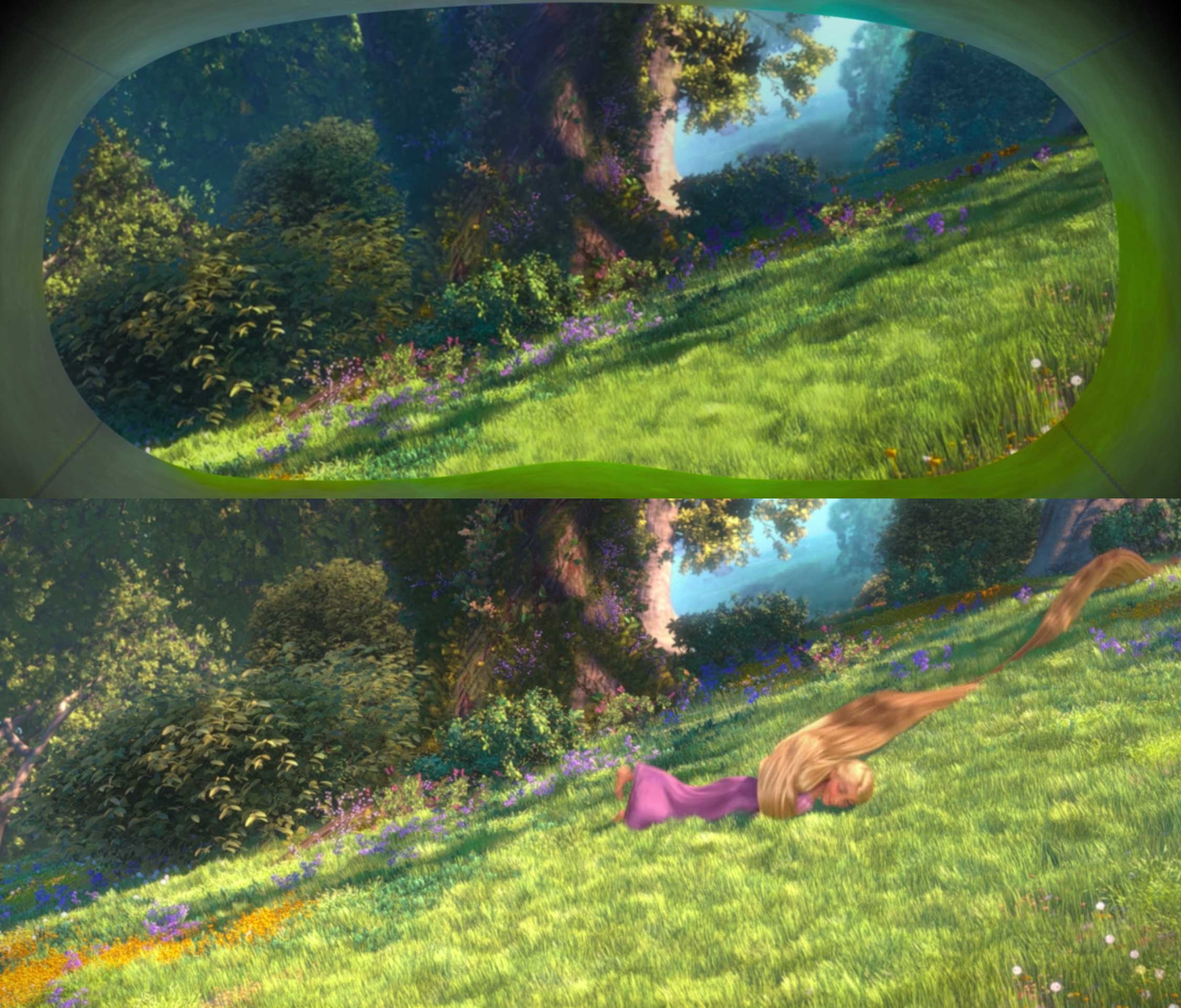 Top: Once Upon A Snowman. Bottom: Tangled. Images ©Disney

If you’ve been paying attention to the FCU, you’ll know that Rapunzel and Flynn already make an appearance in Arendelle, towards the end of the original Frozen, during the reprise of For The First Time In Forever.

There’s one more slide that also should trigger a memory for you: the mountains and beaches that we see flash by are those of Montuniu, the island featured in 2016’s Moana. 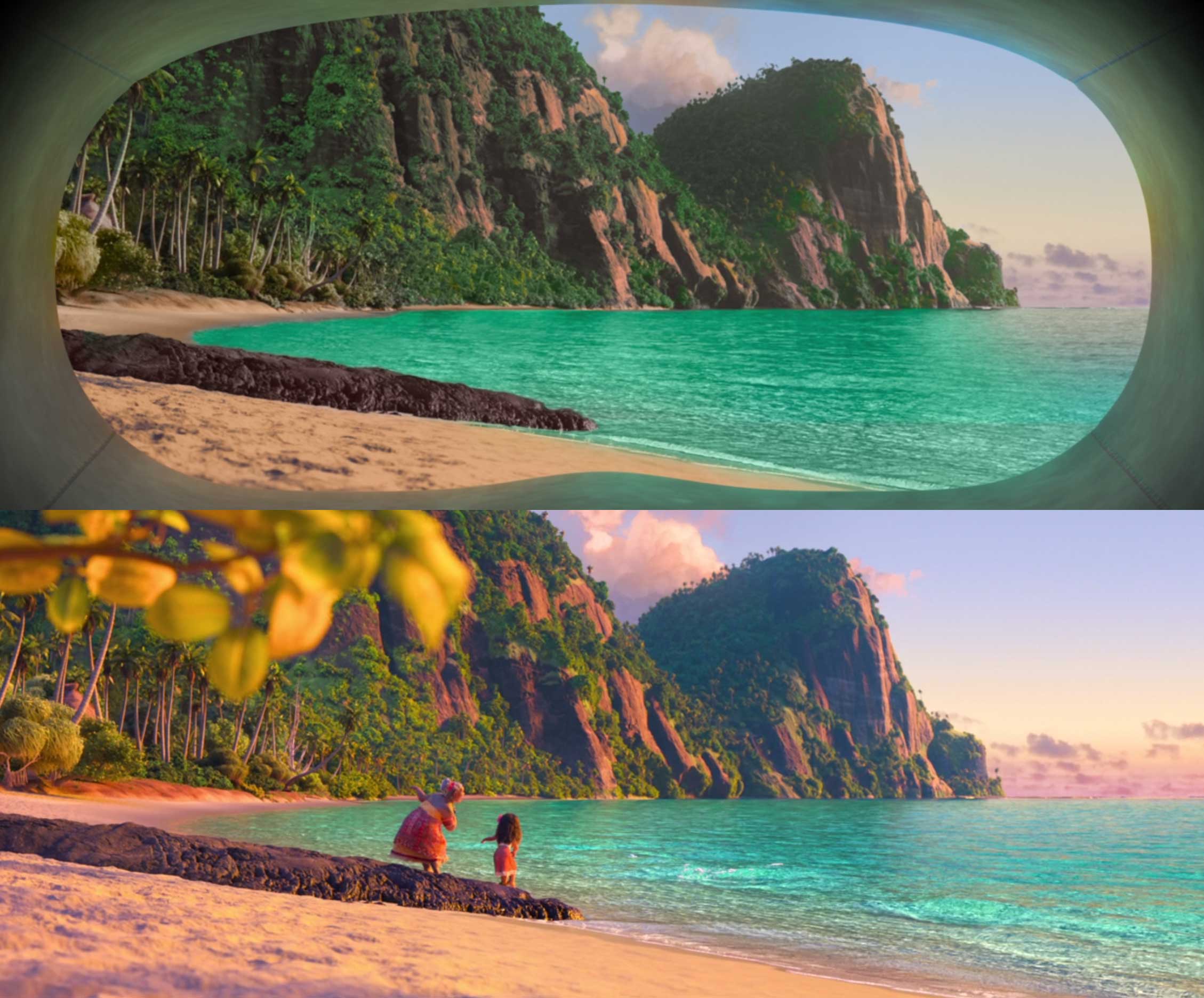 Top: Once Upon A Snowman. Bottom: Moana. Images ©Disney

We all remember Anna’s big wardrobe change in the original film, swapping her rosemåling accented dress for a more winter-appropriate one at Oaken’s, but did you ever wonder what happened to that coronation day dress? Now we know! After swatting off the ice and snow, Oaken proudly displays the dress for sale as part of his “big summer blowout” – only 55 kroner (about $200 USD given inflation and conversion rates)!

Take a look at the clock on the wall behind Oaken in both Frozen, and Once Upon A Snowman, and we find that Anna spends a whopping 8 minutes shopping for supplies (or is it 1 hour and 8 minutes? We honestly don’t know how to read that fancy-schmancy clock 😂 ). 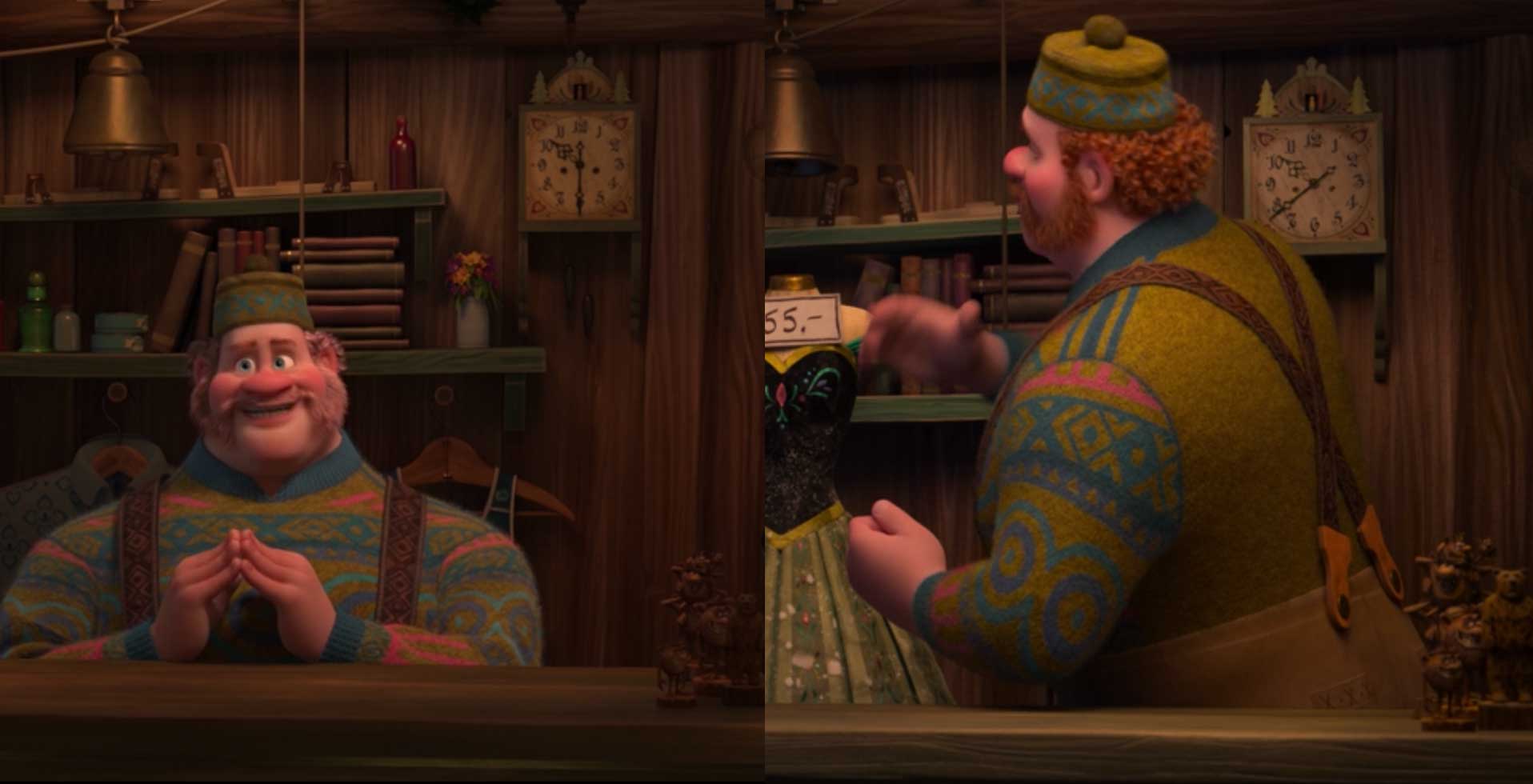 In this short, we learn that there’s more to the Wandering Oaken‘s name than we once first thought. Although Olaf is admittedly illiterate, he somehow figures out that if you scramble up the letters of “Wandering Oaken’s”, you can spell “Naked Norwegians”!

This fact doesn’t actually surprise us since we know that Oaken’s Trading Post actually includes a sauna. Fans of the Broadway version of Frozen will also recall the memorable new song, Hygge, in which a slew of tastefully nude Norwegians form an awkward kickline. You can read more about that new song in our review of Frozen The Musical. Though it is no longer playing on Broadway, it is still running in international and touring versions.

Keep an eye peeled for Olaf’s parts forming a near-perfect Hidden Mickey as tumbles down the mountain, questioning if his wildly detachable limbs are a skill or a flaw.

In true Disney film fashion, we get a quick post-credits stinger too. Don’t forget to stick around to find out if Olaf has finally answered that age-old question, “Is this a skill or a flaw?”

Did you also spot these details? Know of any others that we’d enjoy? Let us know in the comments below or feel free to contact us! If you liked this post, check out more Frozen details in Our Favorite Easter Eggs From Frozen 2.