Our Review of Frozen on Broadway

Our Review of Frozen on Broadway

Update: Unfortunately, the Broadway version of Frozen the Musical is now closed. The below review reflects our experience seeing it in 2018 and the thoughts and information will mostly hold true for all international and touring versions of the show.

Based on the hit 2013 film of the same name, Frozen the Musical opened on Broadway at the St. James Theatre in March of 2018 and has since announced a full-scale North American tour and a handful of international openings.

The show features the same songs from the original film by Robert Lopez and Kristen Anderson-Lopez (whose previous Broadway hits include the very non-kid-friendly lyrics to The Book of Mormon and Avenue Q [although a show about someone who loves Orlando and one about Muppet-like creatures seems oddly appropriate… I digress]), with 12 brand new ones written just for the show, including my personal favorite: Hygge (more on this later).

Writer Jennifer Lee, who wrote the original film and its sequel, was brought in as the show’s bookwriter (essentially the one who controls the show’s narrative). I was very impressed that the spirit and tone of the original film were kept alive, expanded on, and slightly altered without losing much integrity. I feel a lot of this has to do with the original story and lyricist team coming back together to build out this show. 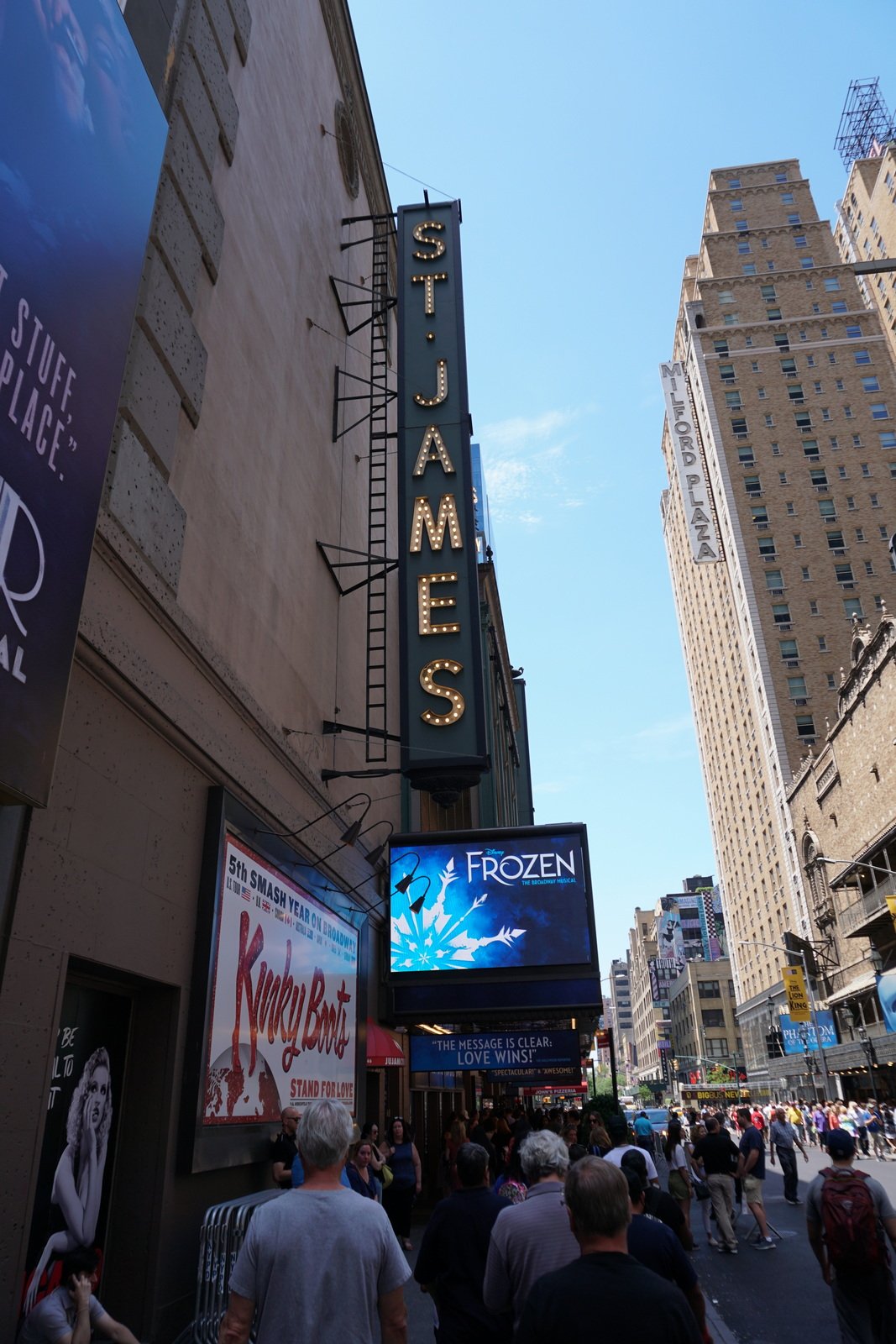 The historic St. James Theatre is as grand and miraculous as a Broadway theater can get. Fans of the very un-Disney-like Curb Your Enthusiasm may recognize it as the theater where Larry David and David Schwimmer star in the Broadway version of The Producers during the season 4 finale of Curb Your Enthusiasm. 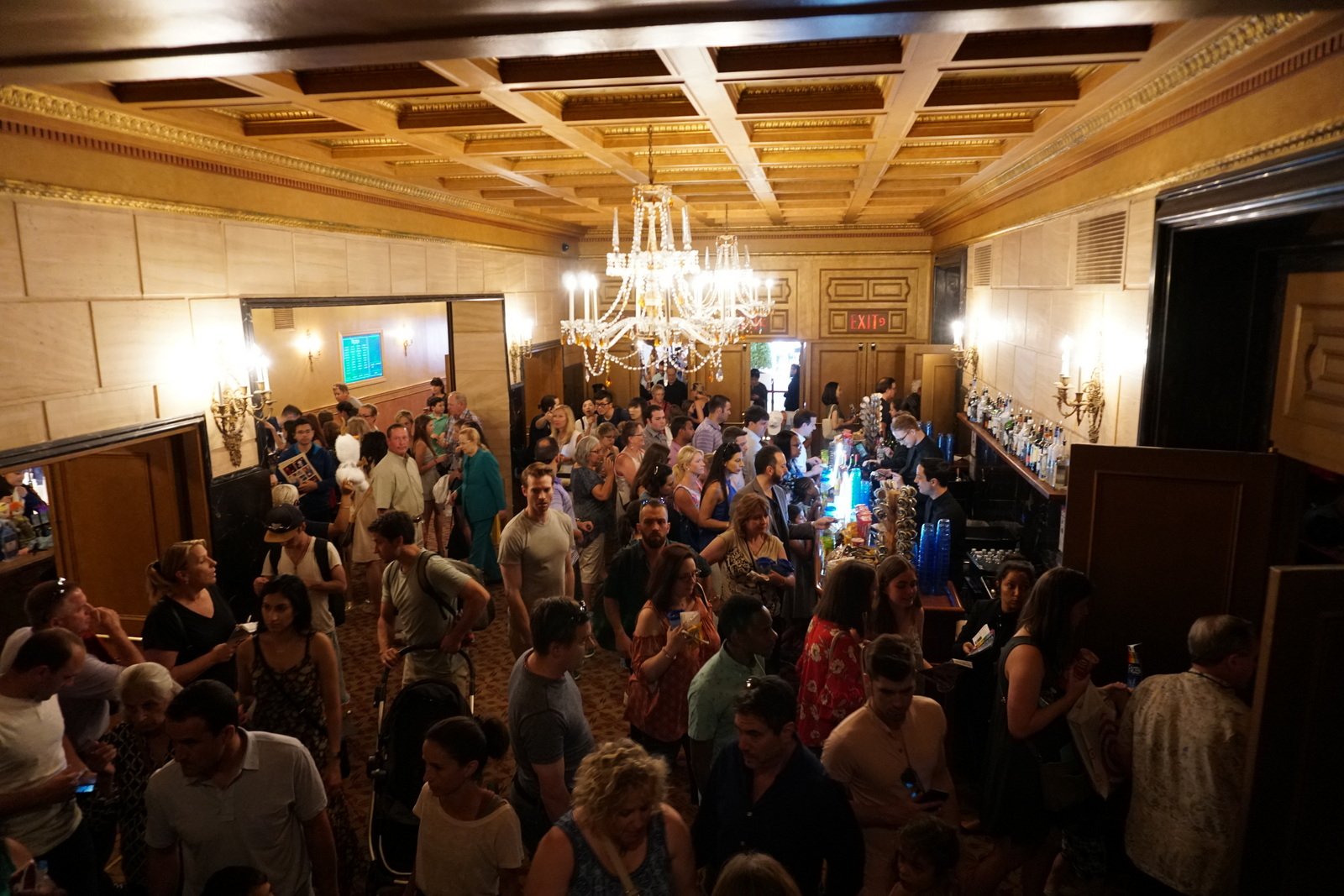 Guests arriving to the lobby of the St. James Theatre

Arriving guests will instantly be hit by a bar selling pre-show specialty drinks in souvenir sippy cups with names such as Force of Nature and Fixer Upper in addition to an assortment of other (in true Disney form) overpriced refreshments and snacks.

Pro-tip: check out the ingredients in the photo below to make your own version at home! 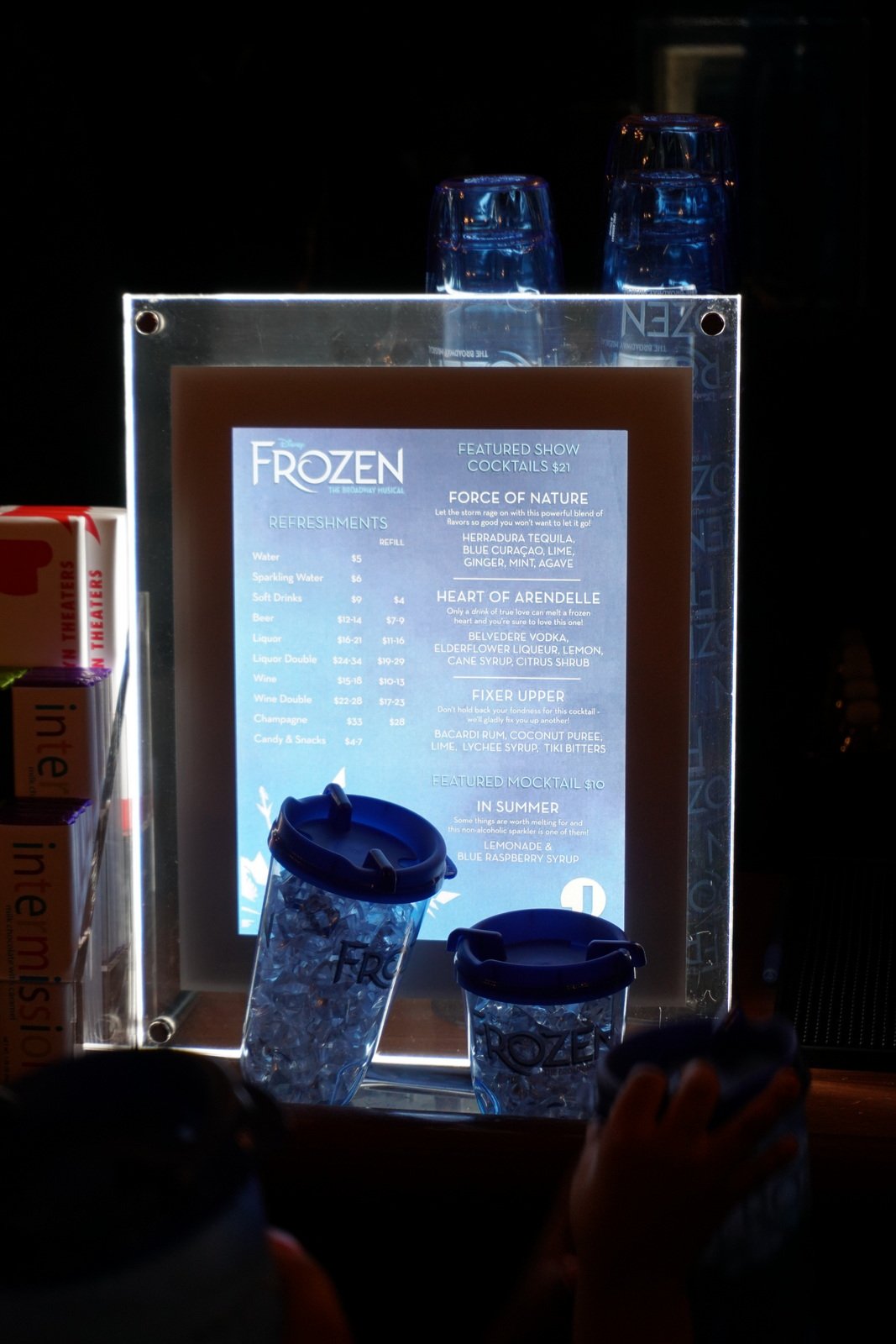 The Gift Shop and Souvenirs

You also can’t make your way to your seat without passing through the many gift shops and souvenir stalls set up along the way. I’ve been trying hard lately to avoid unnecessary purchases, but I really am a sucker for “authentic tchotchke” – items designed to look like they came straight from fictional worlds, especially when they’re discreet and not overtly Disney looking. There was no shortage of these as each item was designed to look like a gift from the town of Arendelle or purchased directly from Wandering Oaken’s Trading Post. 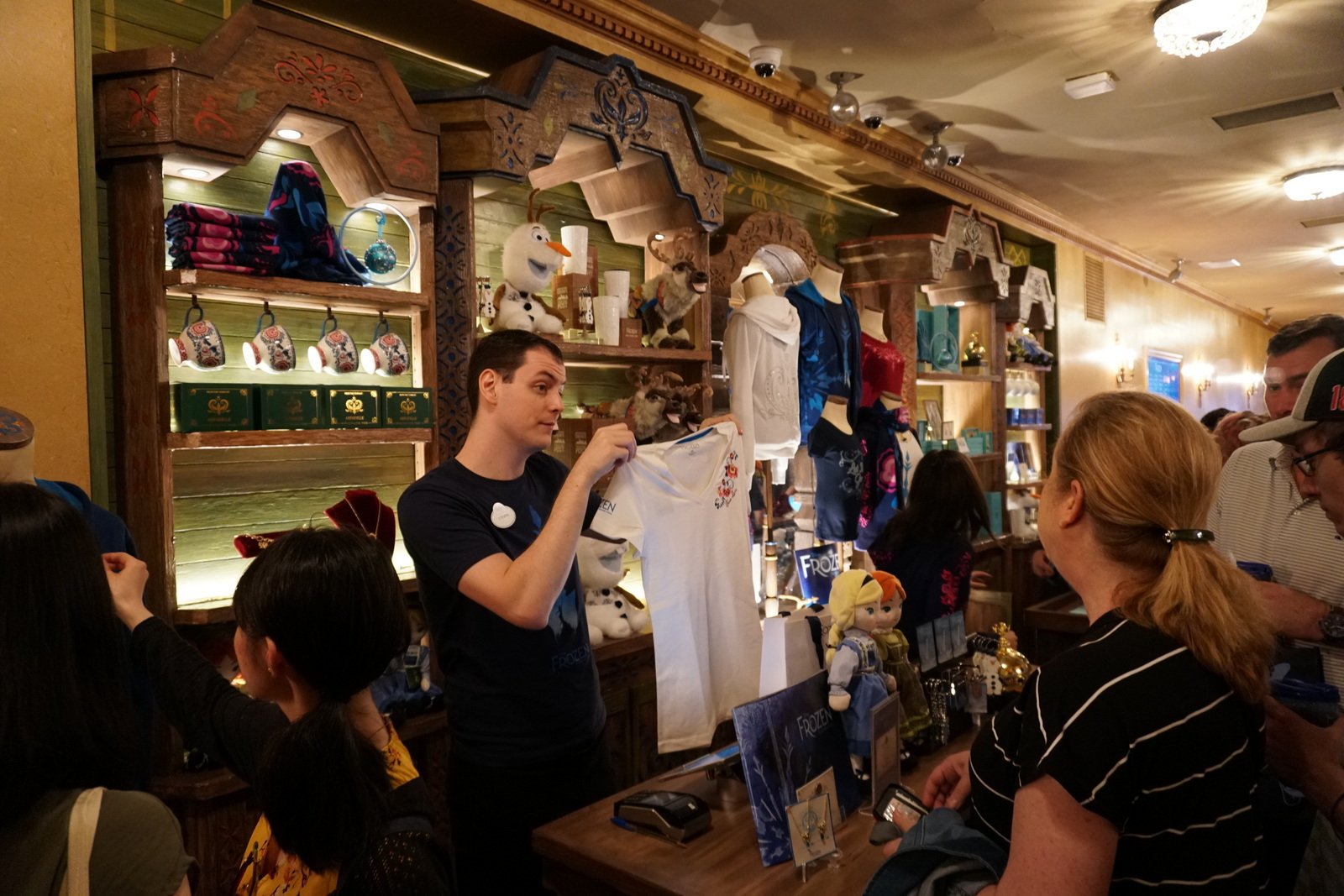 Spend all your money! 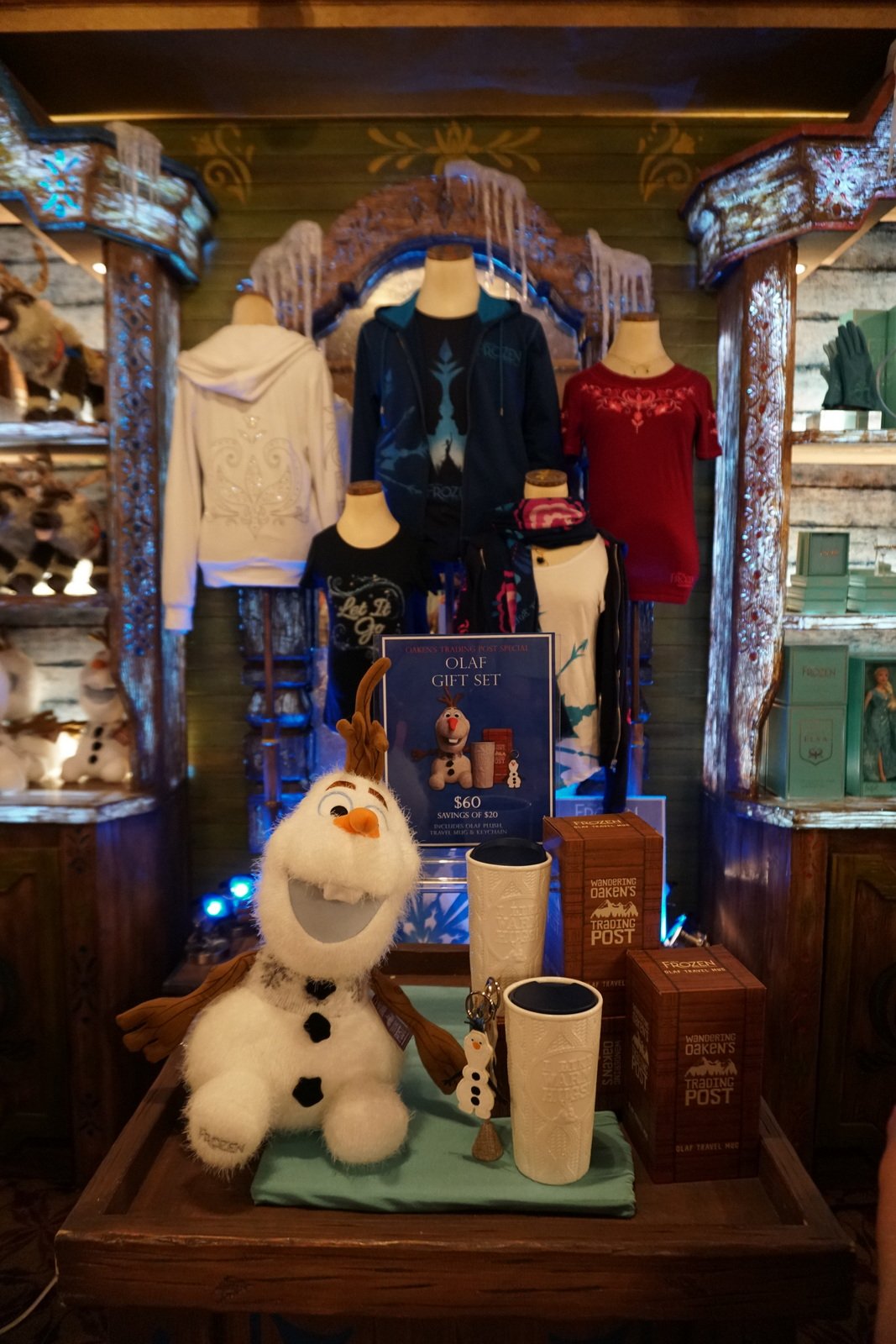 Just a small sampling of the merchandise available for sale 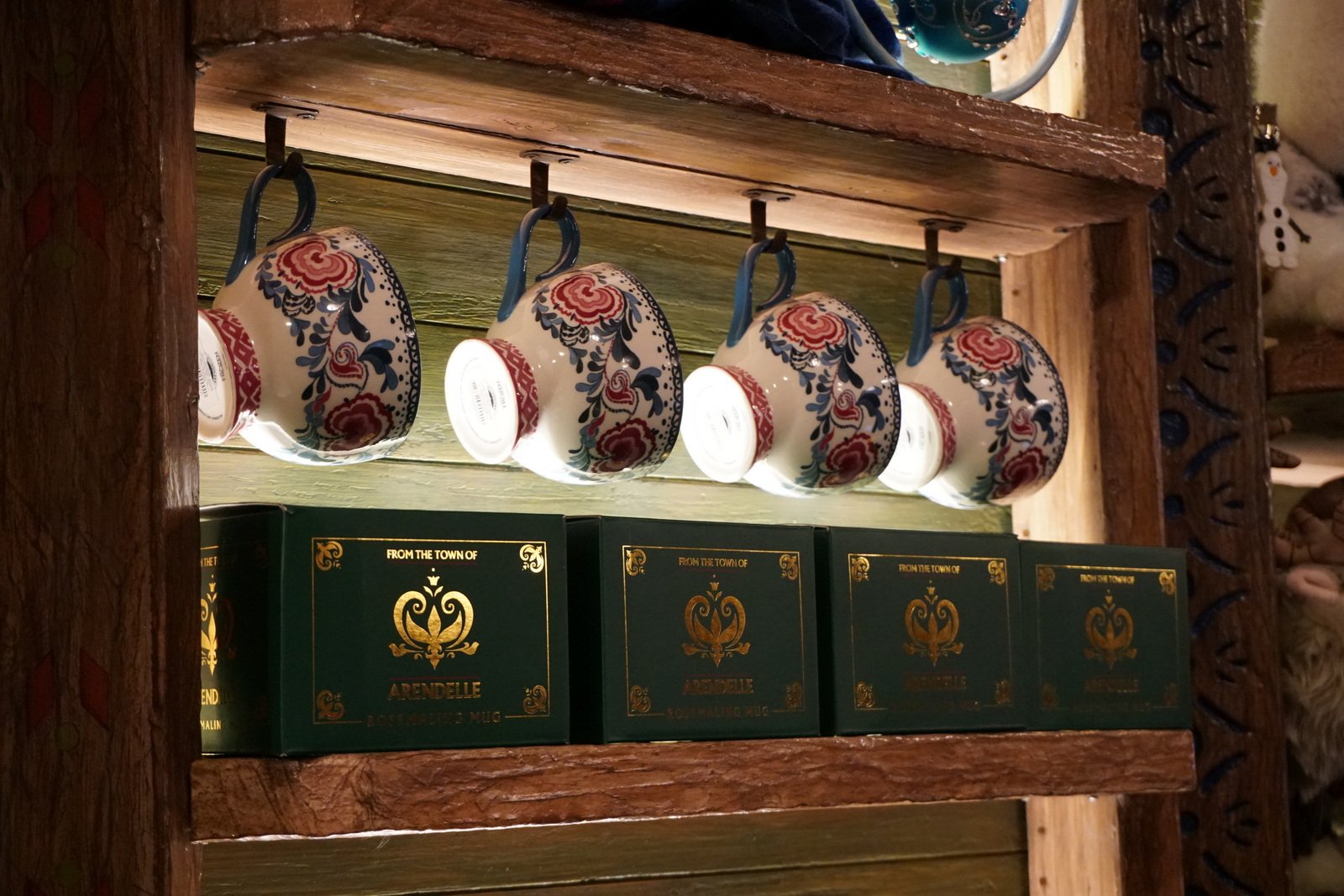 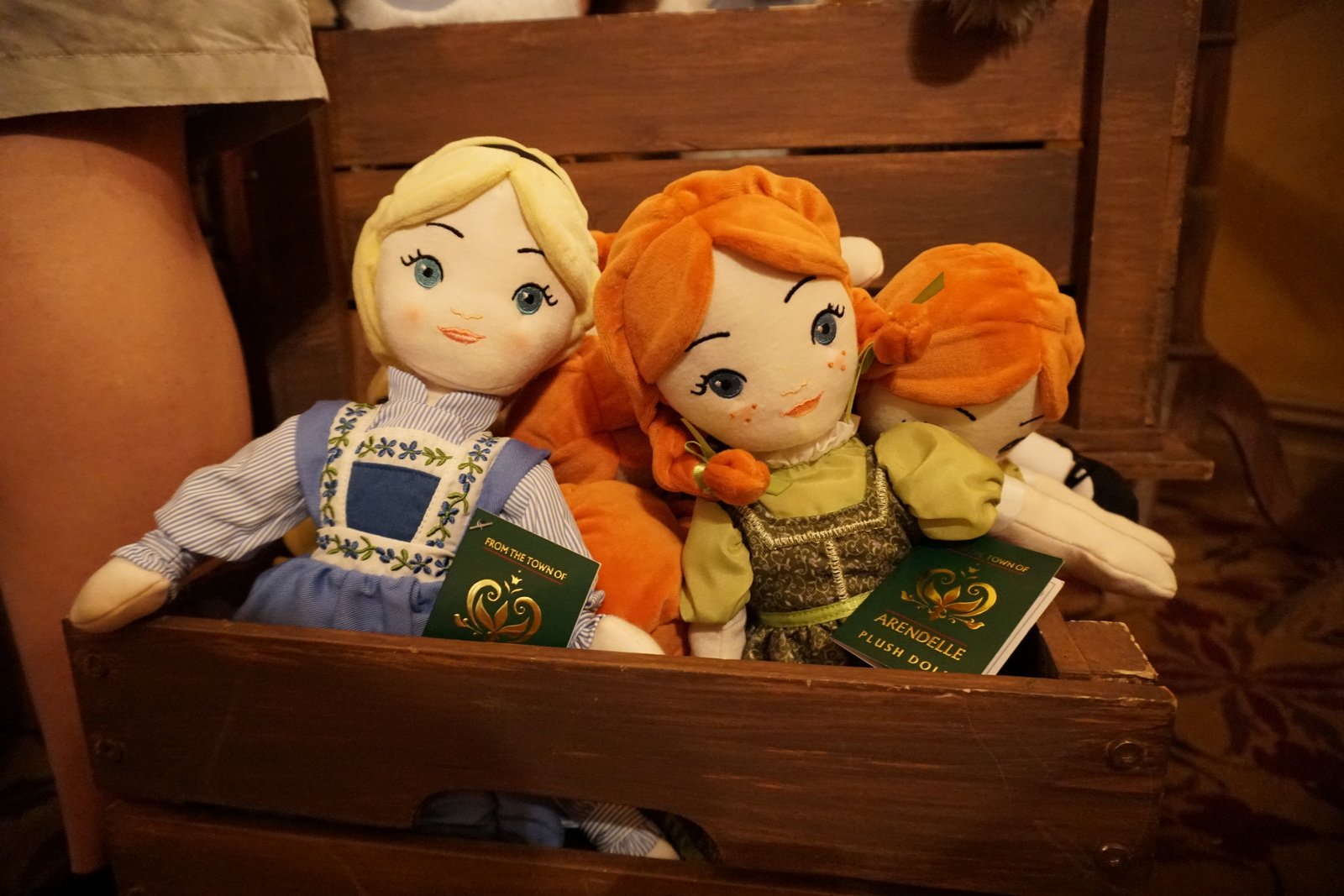 Luckily, I was able to resist. It’s a good thing too since the last thing I need right now is a prop replica gold-plated coronation day orb rotting on my shelf. If you really want one and don’t plan to be in New York City any time soon, I suggest you keep an eye on eBay. 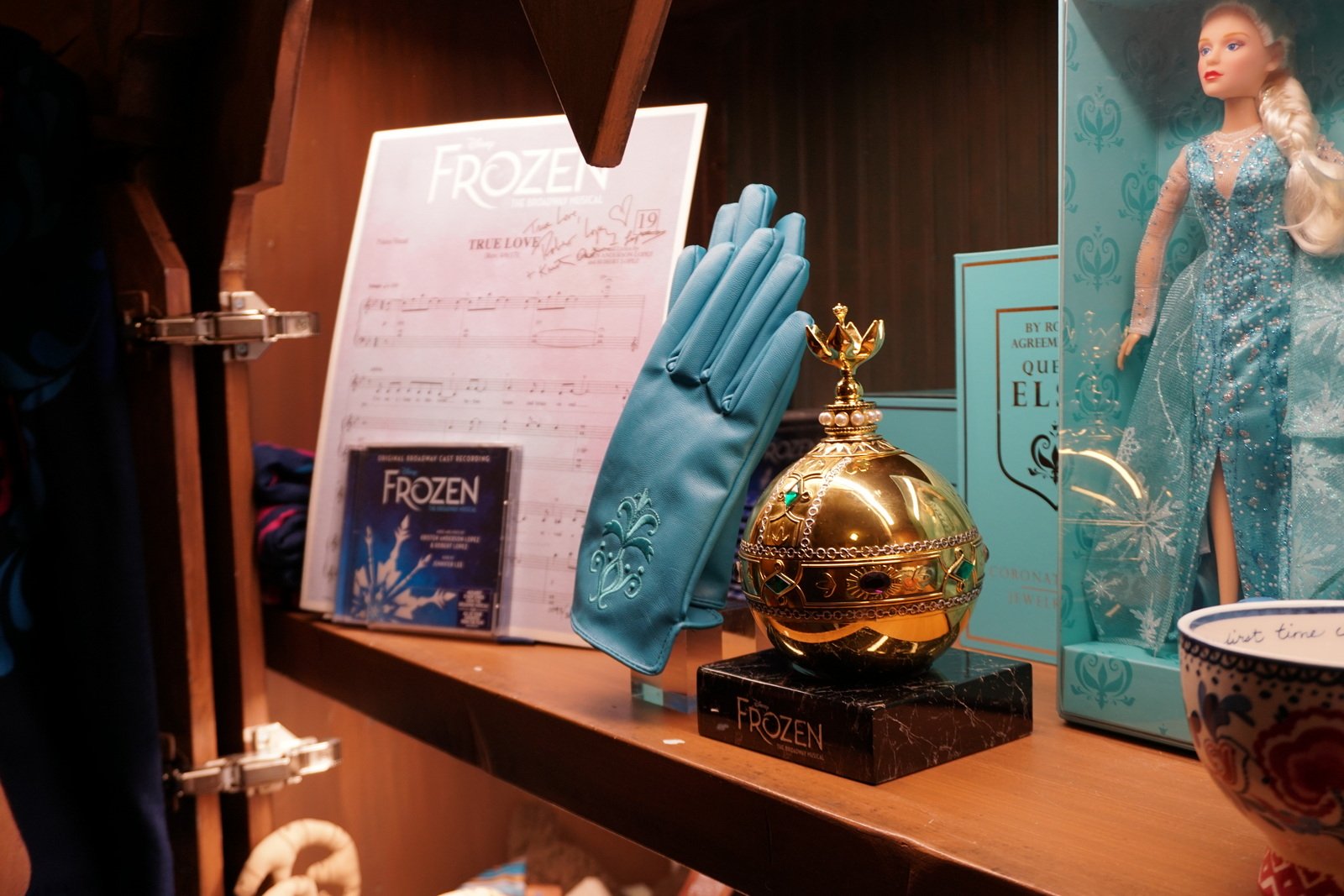 Some of the collectible merchandise, including the completely unnecessary, but very awesome orb

Our advice: put your blinders on and head straight to your seats as you’ll want time to settle in, take in the theater’s vast interior, and peruse your Playbill before the show starts. If your child (or vertically challenged family member) needs a booster seat, they’re available for free in the lobby, just ask a friendly usher near the stairway. 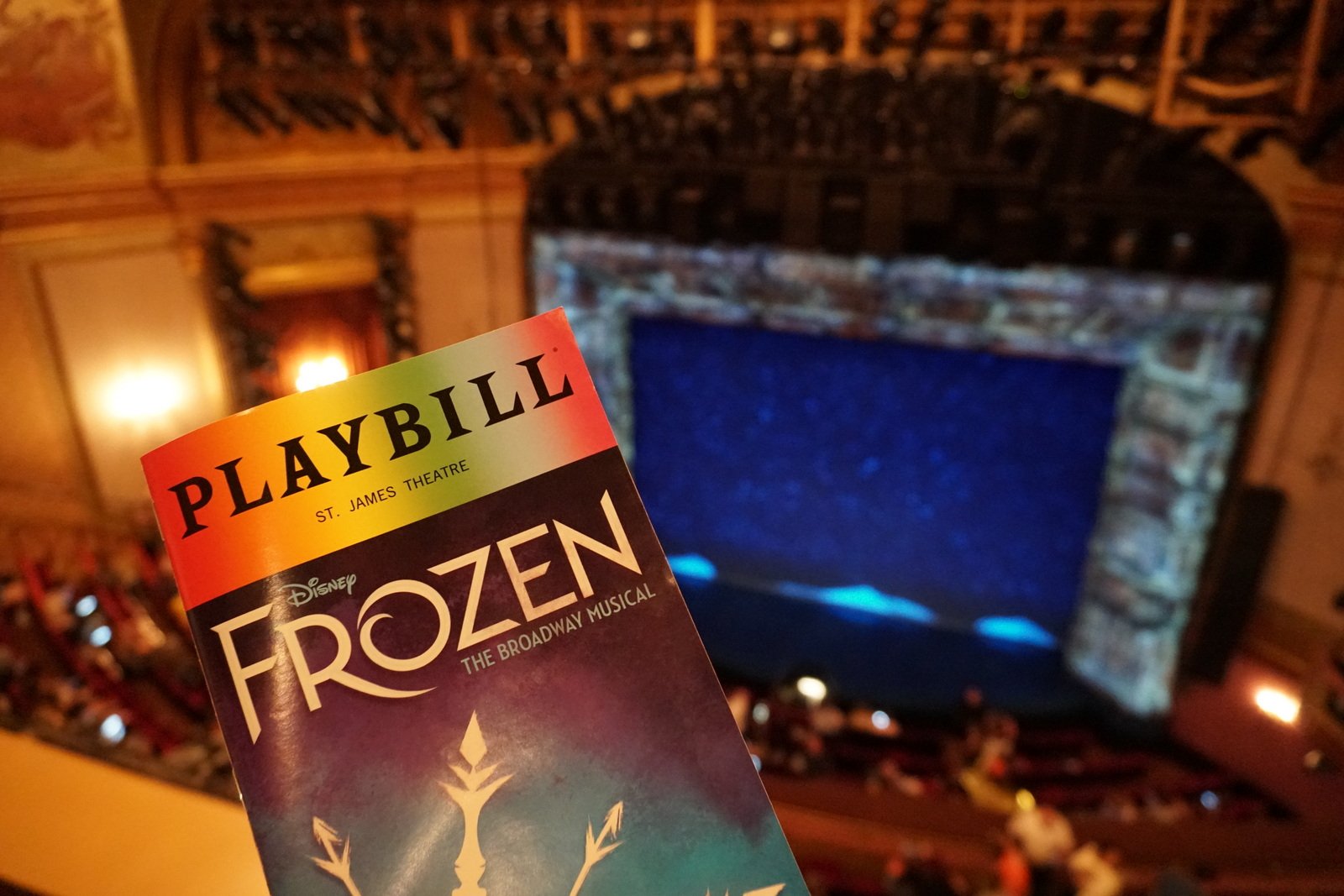 Getting ready for showtime!

The Production and Music

The show was as over-the-top and spectacular as you’d expect from a Disney produced Broadway musical. Special-effects projections and practical effects bring Elsa’s powers to life and puppetry techniques animate Olaf (à la Timon in the Broadway version of The Lion King and most characters in Finding Nemo – The Musical) and Sven.

The show is about 2 hours and 20 minutes long with a quick intermission about halfway through. The storyline sticks pretty close to the film version with scenes expanded and stretched with additional dialogue and a slew of new songs including a particularly memorable one that kicks off the second act called Hygge, the Scandinavian word representing a state of comfort. You’d have to see it for yourself, but let’s just say: there’s a fair amount of tasteful “nudity” involved.

Elsa also has a new epic balled called Monster that rivals Let It Go and will send chills down your spine.

“What do I do? No time for crying now I’ve started this storm, gotta stop it somehow”
– Elsa in Monster 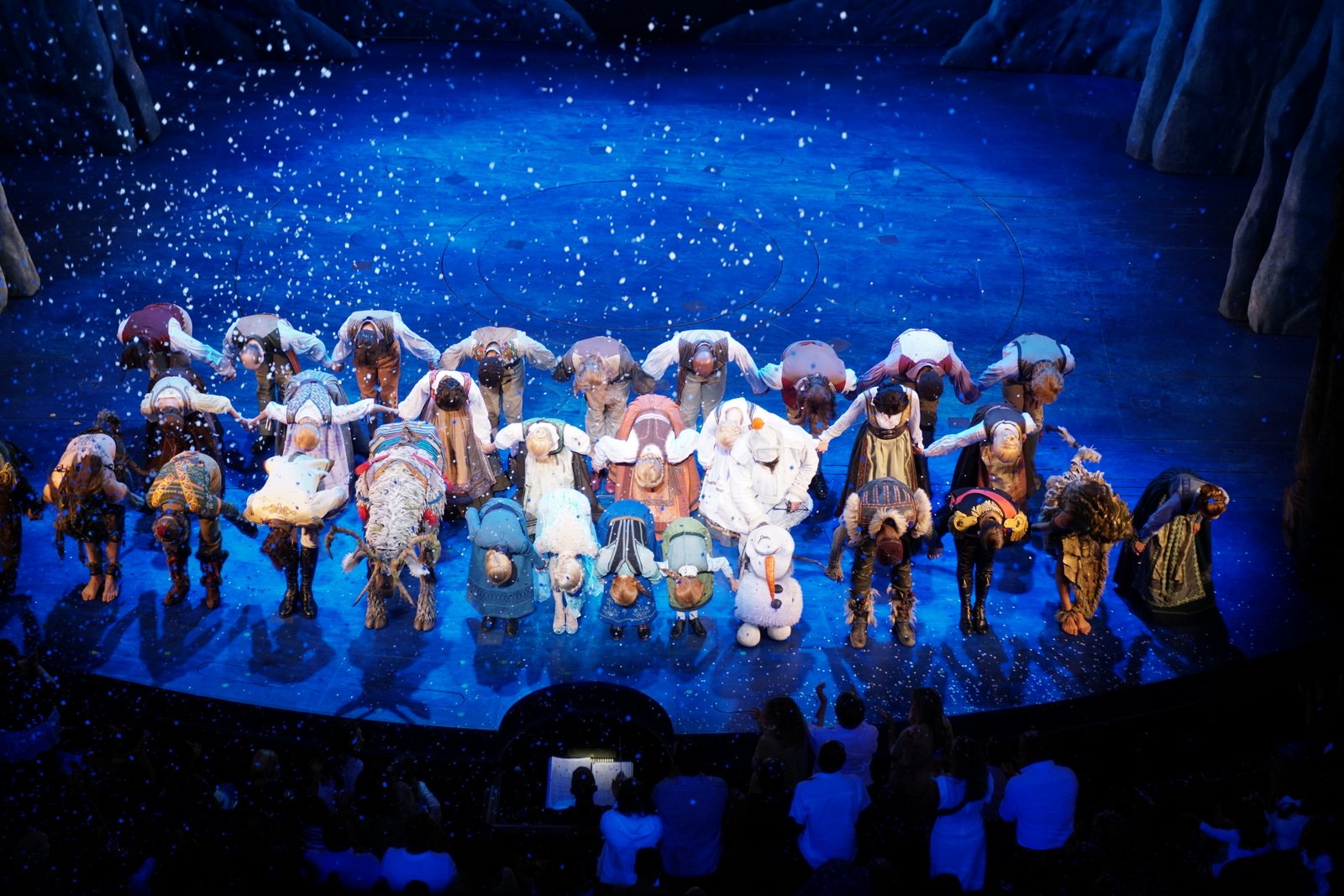 The special part was seeing it with my (rather energetic) nieces who were 4 and 5 years old at the time and had never seen a show like this before. They (surprisingly) sat through the entire production, mouth agape at the colors and sounds. My seven-year-old nephew was also with us, and while not a huge Frozen fan, he thoroughly enjoyed the show, citing the puppetry and “magic” as his favorite parts.

There were definitely younger kids around us in the audience, luckily with no audible interruptions. When considering the show for your own children, make sure they’re able to sit still (and quietly) for long periods of time (duh). It doesn’t hurt that they’re familiar with the content, but considering you’re reading this on a site called WanderDisney, I assume they will be. Also, bring snacks and drinks with you to avoid the limited and overpriced snack bar.

We really loved the show and would see it again, especially on tour or in another country. The official site touts it as intended for ages 8 and up and is not recommended for anyone under the age of 4.