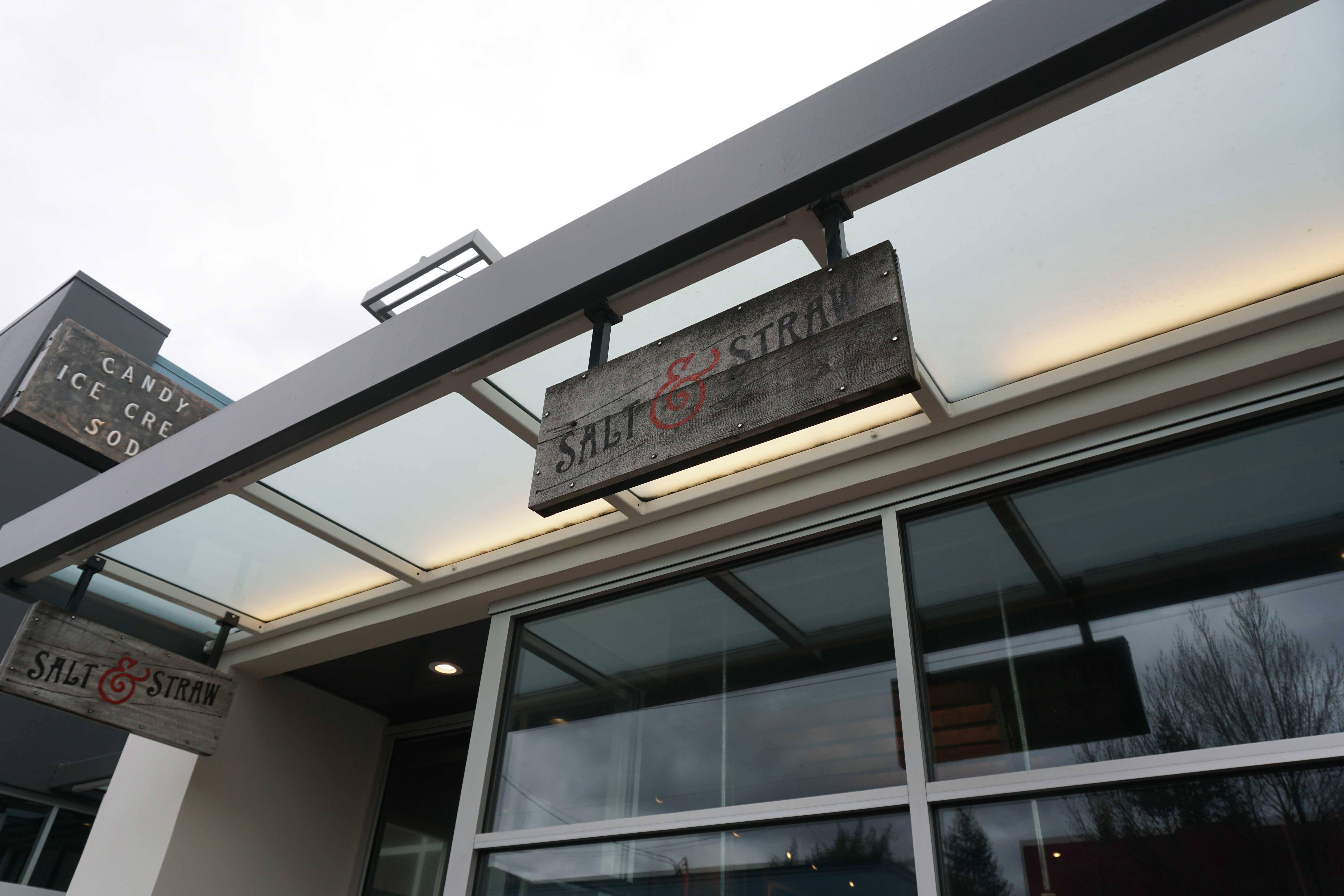 The team behind the phenomenon are cousins Kim and Tyler Malek. Their passion for creating farm-to-cone ice cream in novel flavors (both sweet and savory), made in small batches from locally sourced ingredients gave the shop an edge on its competition. Disney took notice and brought them onboard during a recent re-Imagineering of Disneyland’s shopping district.

Salt & Straw first opened up operations as a traveling food cart back in 2011. The name was chosen based on how ice cream was originally made, using rock salt to freeze, then straw to insulate to it.

After a few months of national press and overwhelming success, the cart was retired and a brick and mortar store welcomed its first guests at 2035 NE Alberta Street. While we have yet to check out the Disneyland location, we were able to visit the store that started it all during a recent trip to Portland.

The founding duo chose the NE Alberta locations because they felt that the area epitomizes their values of supporting a stronger local community. The stretch of Alberta surrounding the shop is known as Portland’s Art District. It’s littered with locally owned cafes, restaurants, cute boutique shops, and inspiring graffiti murals. We had a particularly delicious lunch at a Vita Cafe before strolling towards Salt & Straw. 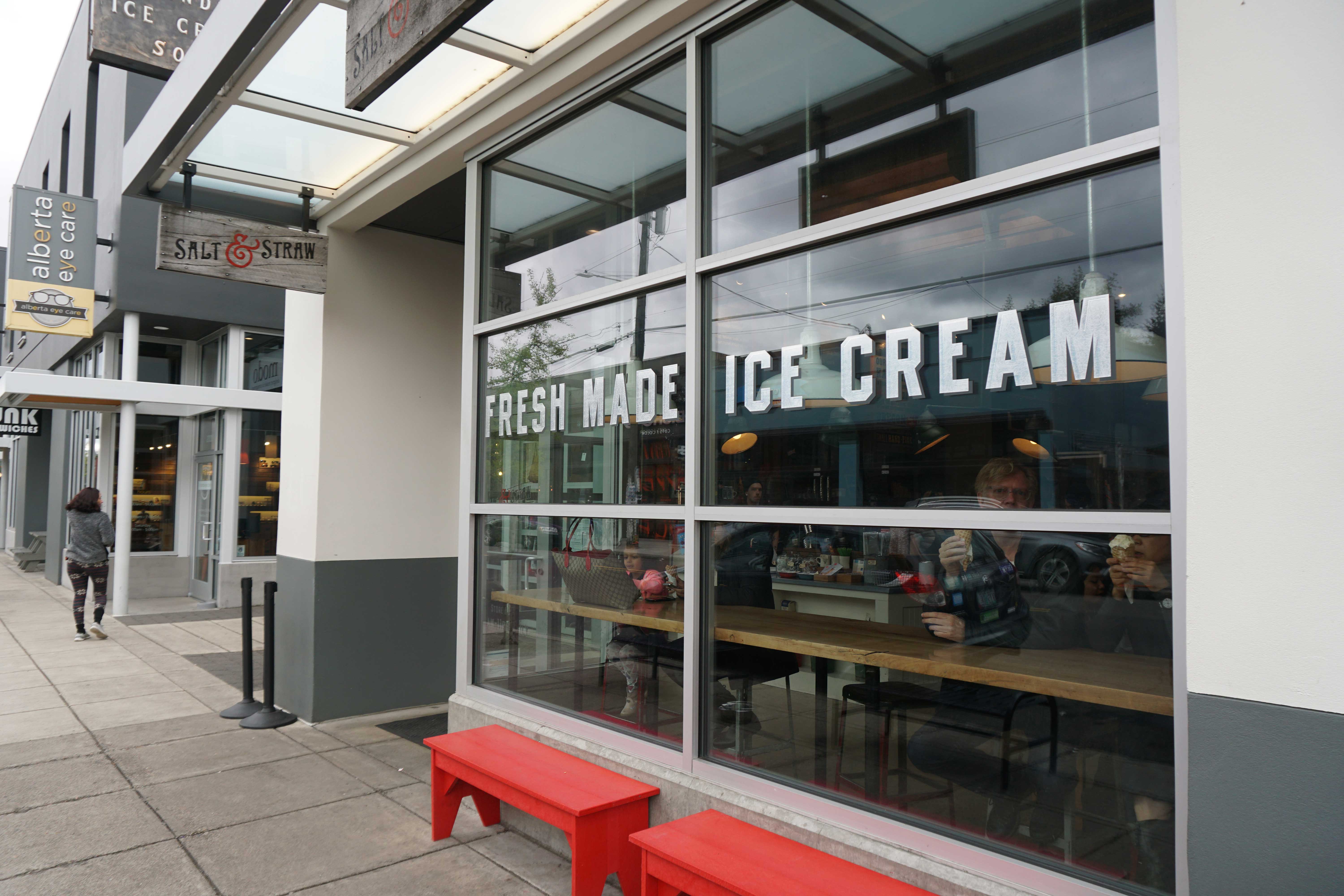 The entrance to Salt & Straw’s first ever storefront

We entered the store and were greeted to a clean, hip interior and friendly staff. Samples can be requested and are given on a stainless steel mini-spoon (bonus points for environmental consciousness!). We tried all of the vegan flavors which were rich and creamy, using a coconut base that has a taste and texture so close to dairy that you really couldn’t tell the difference. 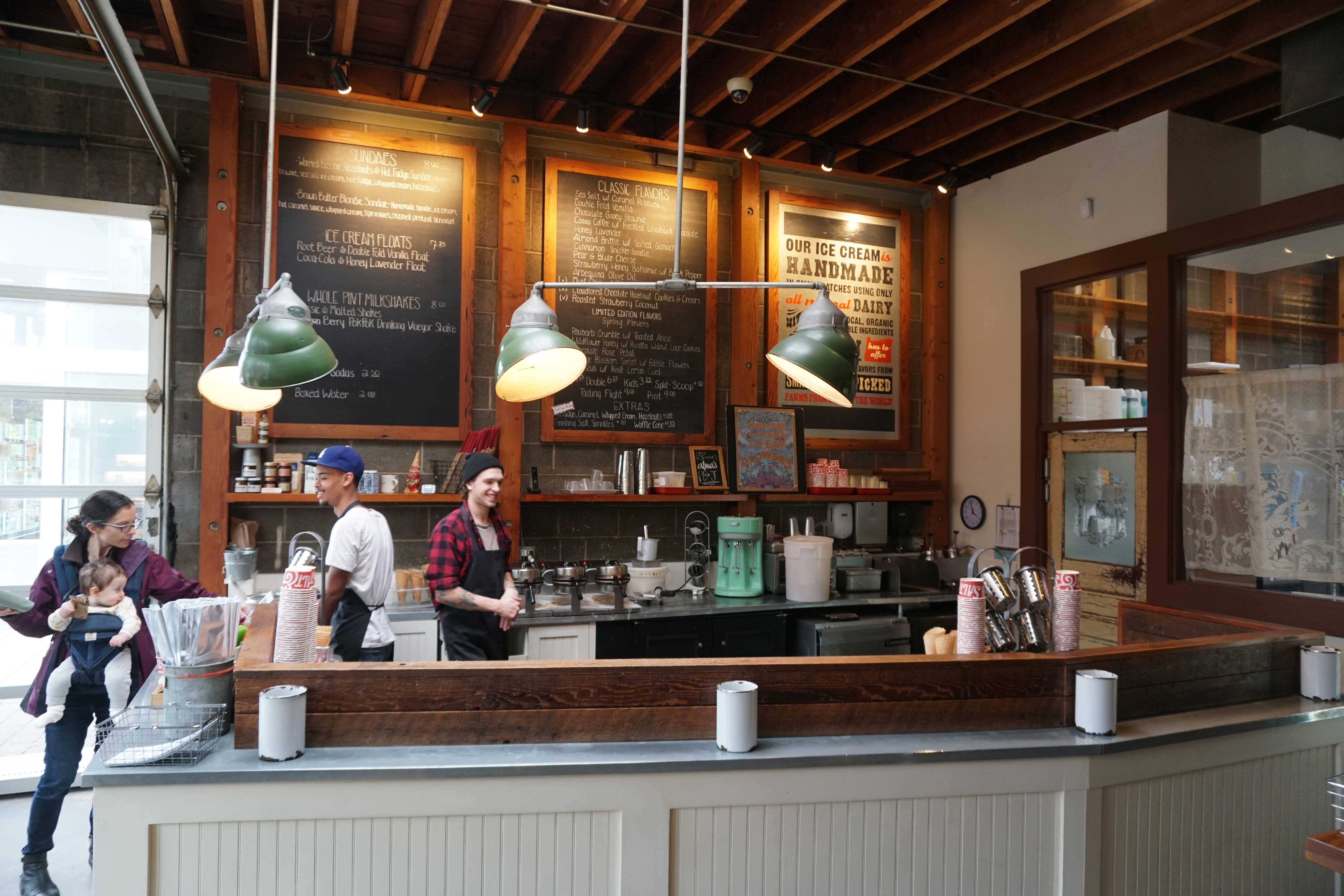 We landed on our favorite which was actually a sorbet, the Orange Blossom Sorbet with Edible Flowers, one of the many seasonal flavors available. It was light and refreshing, especially nice after a big lunch. The sorbet was still creamy and didn’t get watery, like most sorbets. The real edible flower chunks were fun to find and gave the scoop a great speckle of color. 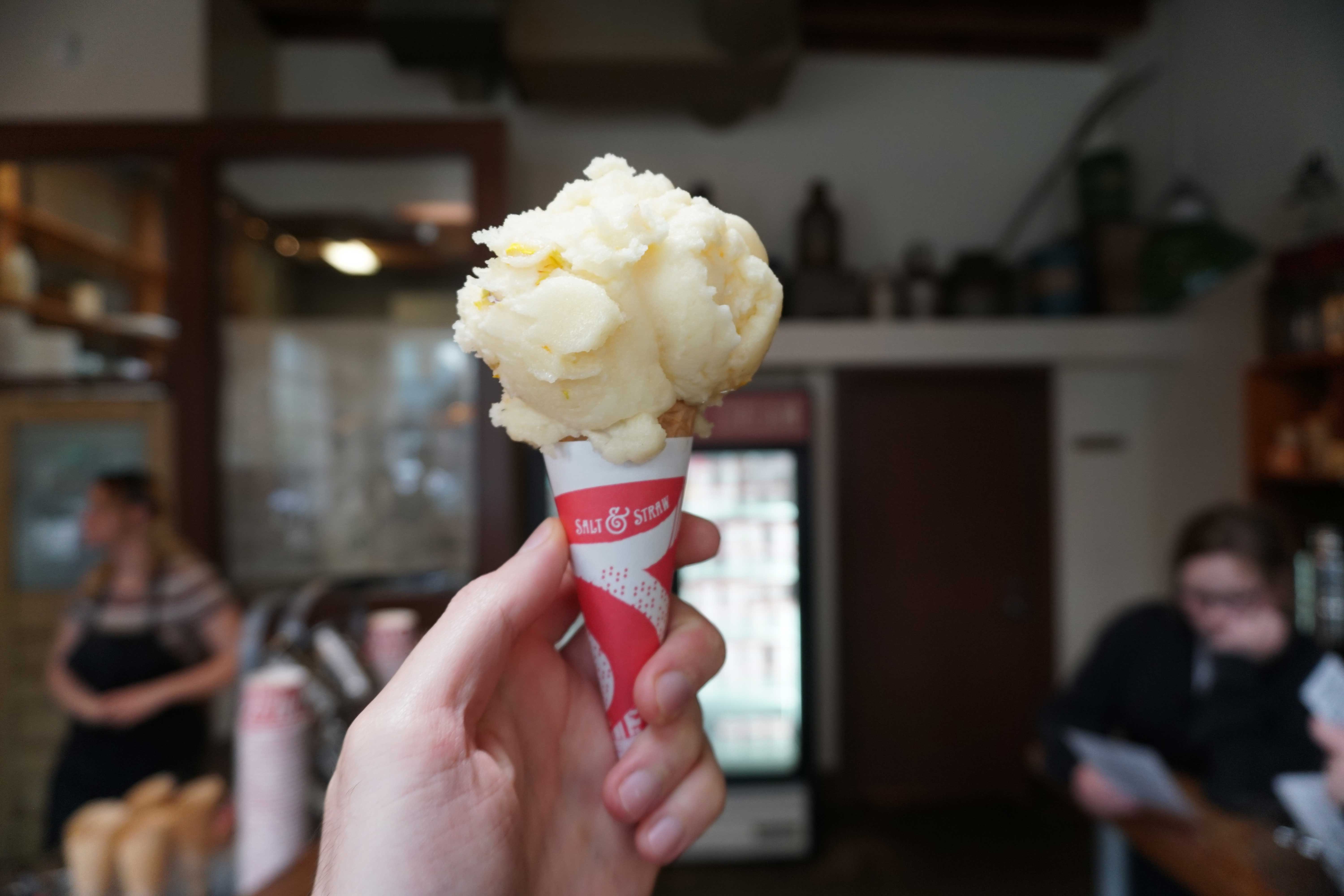 It was also nice to learn that a lot of their flavors are seasonal and change regularly based on the availability of ingredients. Flavors also vary slightly by locations: whereas Portland locations will have a flavor called Coava Coffee with Freckled Woodblock Chocolate which uses locally roasted coffee from Coava and locally produced chocolate from Woodblock Chocolate, their Disneyland shop will have a comparable flavor called Sightglass Coffee Cashew Praline using coffee from California’s Sightglass Coffee.

By partnering with these small businesses they are not only helping to support the local economy, but they are also reducing their environmental impact. We also spotted some items from partner companies available for sale along a wall of merchandise, alongside a number of branded Salt & Straw items. 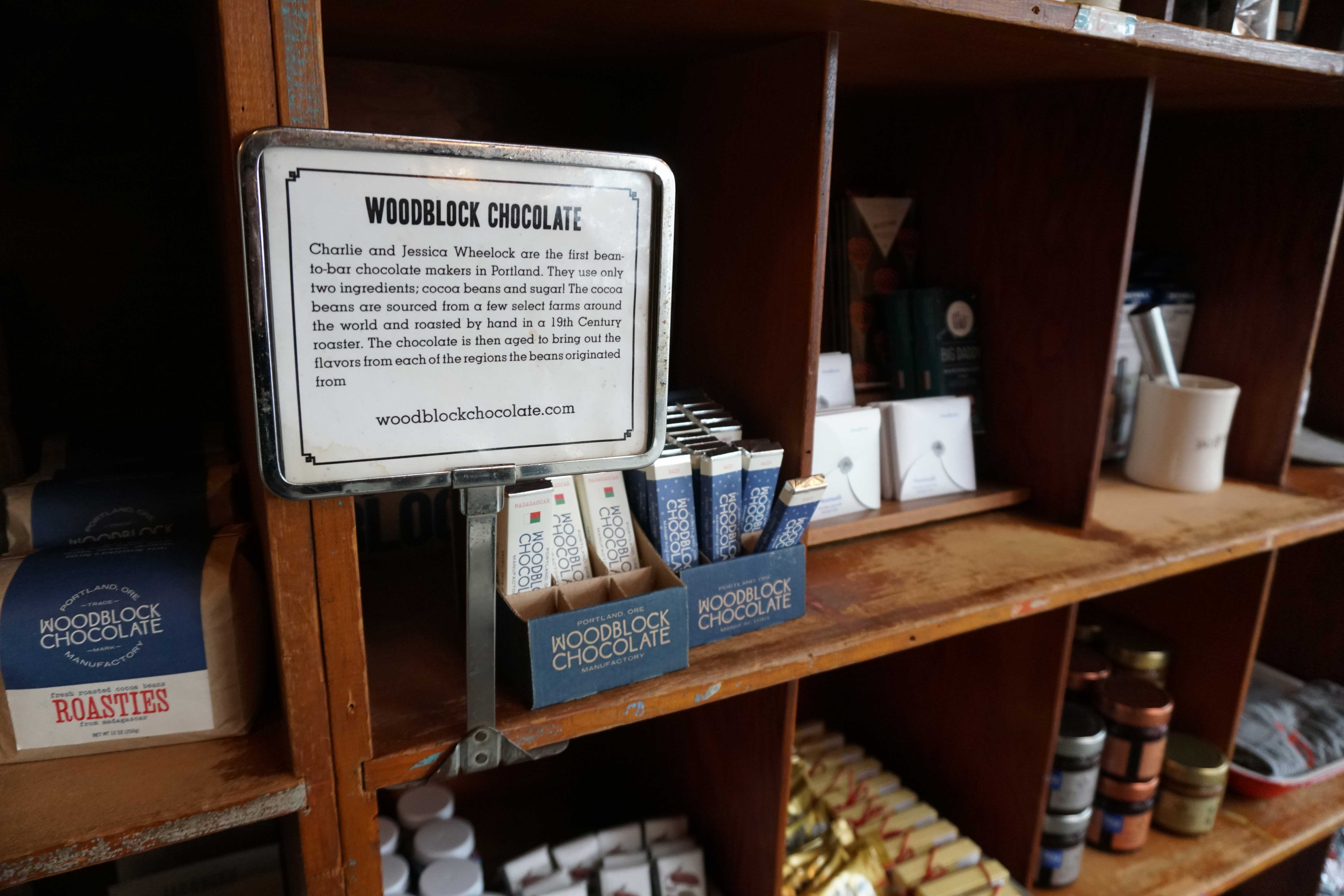 We really enjoyed our first Salt & Straw experience and were really impressed by the inventiveness of their cold concoctions. The store is a welcome addition to Downtown Disney and we can’t wait to try their local flavors

on our next visit. If you’re interested in learning more about their flavors and an insight into their recipes, the company’s founders just put out a cookbook, available at their stores and on Amazon. If you’re not visiting Disneyland anytime soon, a map of their current storefronts can be found on our site, so you can get a taste of Disney while traveling the West Coast.