The Best View in Bavaria: Seeing a Disney Castle In Real Life

The Best View in Bavaria: Seeing a Disney Castle In Real Life

It’s one thing to visit a castle in a Disney park, but it’s another to stand before the very one that gets credit for inspiring the lot.

Neuschwanstein Castle, outside of Munich, Germany, is one to behold and a must-visit for any Disney fan or really anyone that’s dreamt of spending a day in a fairy tale.

Not only did it inspire Herb Ryman’s design of the centerpiece for Disneyland, but it is the co-star of all four Soarin’ attractions (DCA, EPCOT, SHDL, and TDS), a restaurant in Disneyland Paris, and a beer named in its honor is served in Epcot’s Germany Pavilion.

This Bavarian castle was commissioned by King Ludwig II in 1869 as a retreat but, sadly, he never lived to see its completion or its impact on Disney Parks around the world. This King’s grandfather, Ludwig I, gets credit for creating the first Oktoberfest, a celebration in honor of his wedding day.

We knew we had to see this bad boy in-person and on a recent trip to Europe, we made it a priority. With encouragement (in the form of a blog post) from our pals, the Brickers, we charted our course: a day-trip while staying with friends in Munich. Since we decided on the trip only a day out, entrance tickets to tour the inside were sold out – but we were OK with that as we were also on a budget. If you’re desperate for the tour, make sure you plan it well in advance.

Today, the castle is easily reached from Munich by car, train, or an organized tour. Since we had prior commitments for the morning and already had a car rented, we opted for the road trip. Public transport is definitely worth looking into, though, and would have been our first choice had we not had the time constraint.

Driving to the castle’s nearby village of Hohenschwangau from the center of Munich can be done in about 1.5 hours each way, but we opted for a more scenic route on our way there which only added about 15 minutes but took us by a lovely vegan cafe for a late lunch in the charming town of Murnau am Staffelsee.

Continuing on our journey, we approached the castle’s village from the modern town of Schwangau. A clearing of farmland revealed our first glimpse of the hillside structure, as glorious as imagined – similar chills-down-your spine feelings we get every time we see a new Disney castle for the first time.

Continuing toward the village, we couldn’t help but stop at a roadside gourd stand (it was October, after all) with an “honesty box” for payment. Just a quick rummage is all it took to find the perfect pair of swan-shaped gourds (apropos as the German word for swan is schwan, the root word of the castle and surrounding town’s names), a gift for our friends hosting us in Munich.

Once in the village of Hohenschwangau, we followed blue P’s to a nearby lot (we’ve heard there’s free parking in the area, but we were running out of sun and decided it was worth the convenience for €6). The castle itself is on hillside next to the village, but the best views can be found from the nearby Tegelberg mountains. There are a few options to get up to the first viewpoint of Marienbrücke: a quick hike (free), bus ride (€), or a horse-drawn carriage (€€).

To save money and spare the cruelty, we decided to take the hike. The official website tells you that it takes 30-40 minutes along a steep hill… what they don’t tell you is that there’s a more direct path (see directions here) that can get you there in you there in about 15-20 minutes – the path is a bit rugged but quite easy to navigate.

Once on Marienbrücke (Mary’s bridge), take a deep breathe, bare the crowds and behold the beauty.

This fantastic viewpoint overlooking the castle comes complete with a cascading waterfall leading to a river below you. The castle, the bridge, the waterfall, the surrounding nature: it makes you feel like you’re in a real-life fairy tale. Sharp-eyed Disney fans can spot the bridge towards the end of the Neuschwanstein sequence on all versions of Soarin’. Take a look for it the next time you ride! 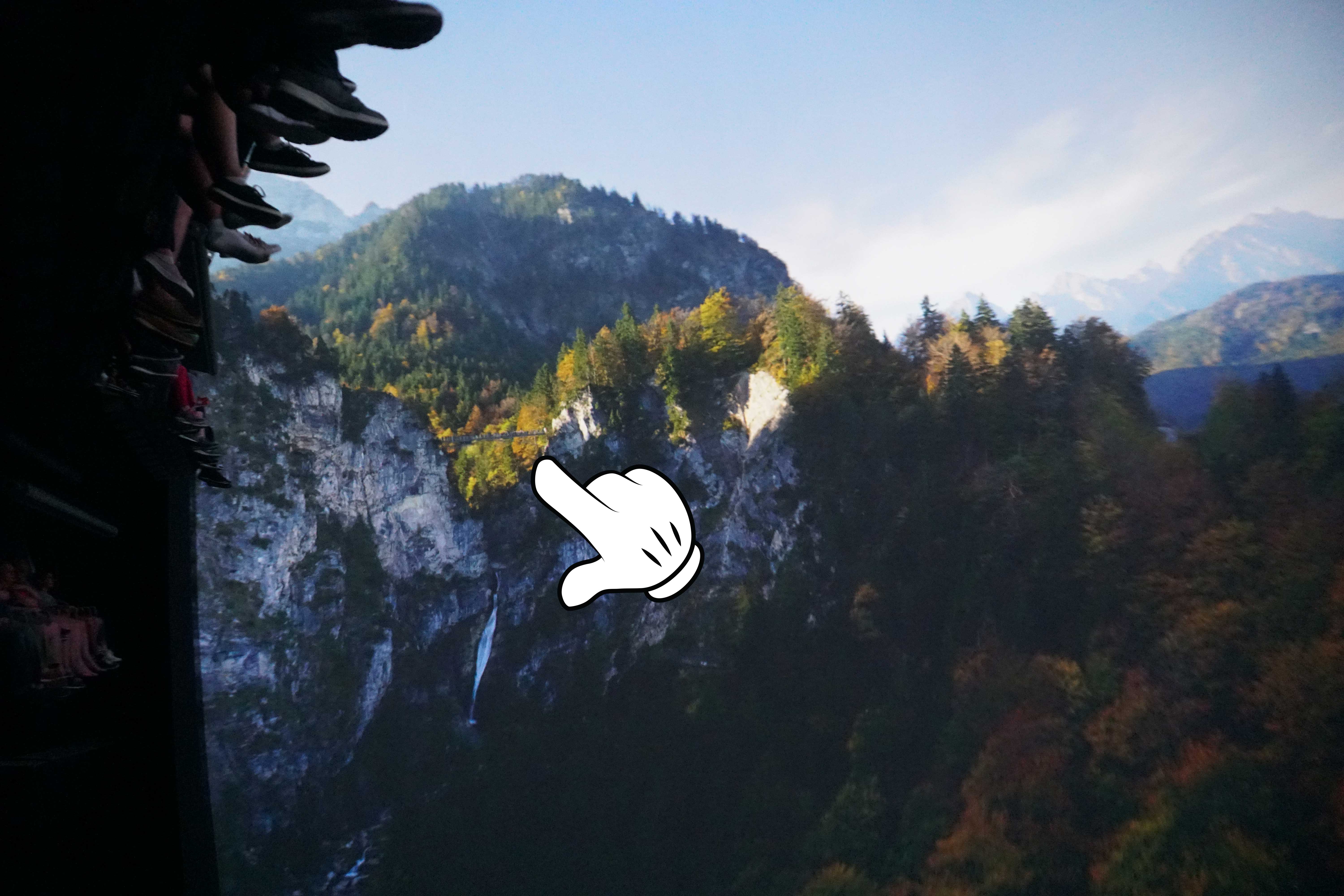 This could be you!

So… the view from the bridge must be the best view in Bavaria then… right? Not quite! Most people just make it to the bridge and turn around, but you’d be missing out. Strap on your boots and prepare yourself for about 25-30 minutes of more hiking.

This one’s a bit more difficult than the one going up to the bridge (see directions here). We’d describe it as easy-to-moderate since while uphill, the path is clearly marked and it’s a basic out-and-back to ascend this portion of the mountain. A great hike for those who are new to nature.

When you get to this point…

…you know you’ve made it: THE BEST VIEW IN BAVARIA*
(*according to us).

Here, you can see Hohenschwangau and the castle where Ludwig II grew up (to the right of the lake in the photo above) with the Bavarian Alps off in the distance. Take it in, but don’t get caught in the dark. As we backtracked down the mountain, the sun was about to set. Making it back to the bridge, we found only one or two other tourists lingering around.

We’ve seen gorgeous sunset photos from this spot but the clouds ruined that for us. It didn’t matter though, the castle’s beauty as the background dimmed and the lights came on made for a lovely sight.

From here, we decided to trek down to the castle itself to get a close-up view. Darkness quickly settled in but that didn’t stop us – we were drawn to it like Pooh to a pot of hunny.

Well worth getting up-close, but now we were the only ones there, it was pitch black and there were no street lights (photo not found). We broke out our iPhone flashlights and made the trek back to the village – this time taking the main road as we felt uncomfortable using the shortcut we took before. 25 minutes later found ourselves at the Alpenstuben Hotel/Restaurant, ready for dinner.

After dinner, we strolled the neighborhood and window-shopped some gift shops on our way back to the car.

Overall, we were really glad we took the time to visit this area. Seeing the castle in person really blew us away and made us feel like the peasants we are. Make sure to get this on your bucket list, not just for the Disney references but for the breathtaking landscapes, nature hikes, seasonal roadside fruit purchasing opportunities, Insta-ops, and glorious strudel.