When Walt Disney World closed during the COVID-19 pandemic, hundreds of thousands of chairs, stools, benches, couches, and sofas on Disney property remained without a warm tush to keep them company. As tragic as this may have seemed, it’s not a new concept for the Disney Parks. In normal operation, there are many surfaces upon which to sit, that you’re simply not allowed to.

In this blog post, I’ll list my top 10 most desired seating locations. These are the places that I’ve always wondered what it would be like to spend some time, either relaxing with a new perspective or having the thrill of directing your buttocks to be part of the magic in a restricted area.

10. The couch in the moon landing scene of Spaceship Earth

As uncomfortable as that couch looks, I’d love to know what it would feel like to cozy up with a couple of animatronics and watch moon landing footage on a continuous loop. If that gets boring, I could always roll around the shag carpet and play Mouse Trap. 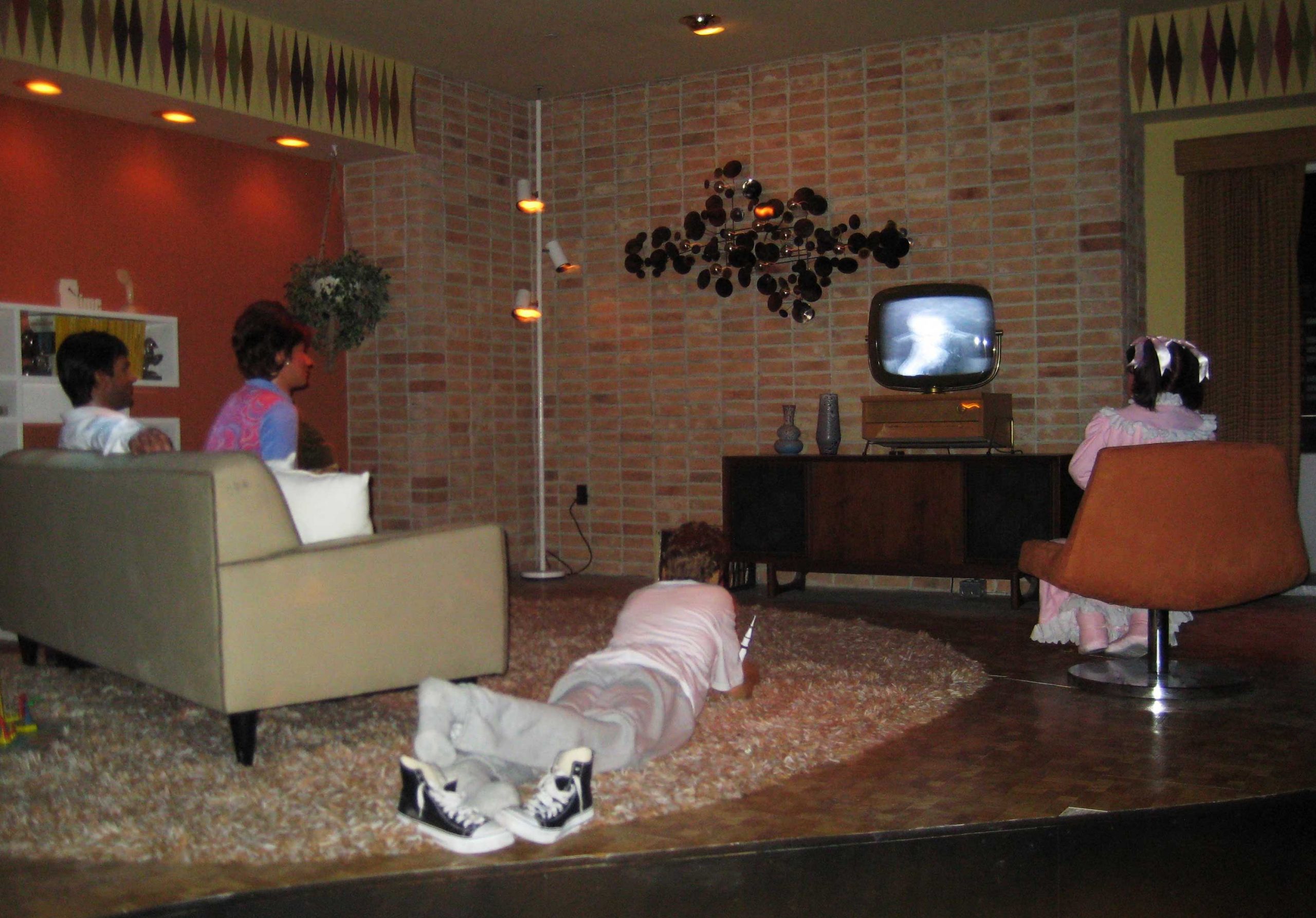 Hopping out of the ride vehicle takes just “one small step…”

Stuck behind a Plexiglas barricade in One Man’s Dream, Walt’s boyhood desk is one of only a handful of publicly displayed surfaces in which we know Walt rested his legs. Though the actual seat part of this olde tyme schoolhouse desk is in front of where Walt sat, I can pretend I was the kid who sat in front of Walt in school, turning around only to cheat off his test. 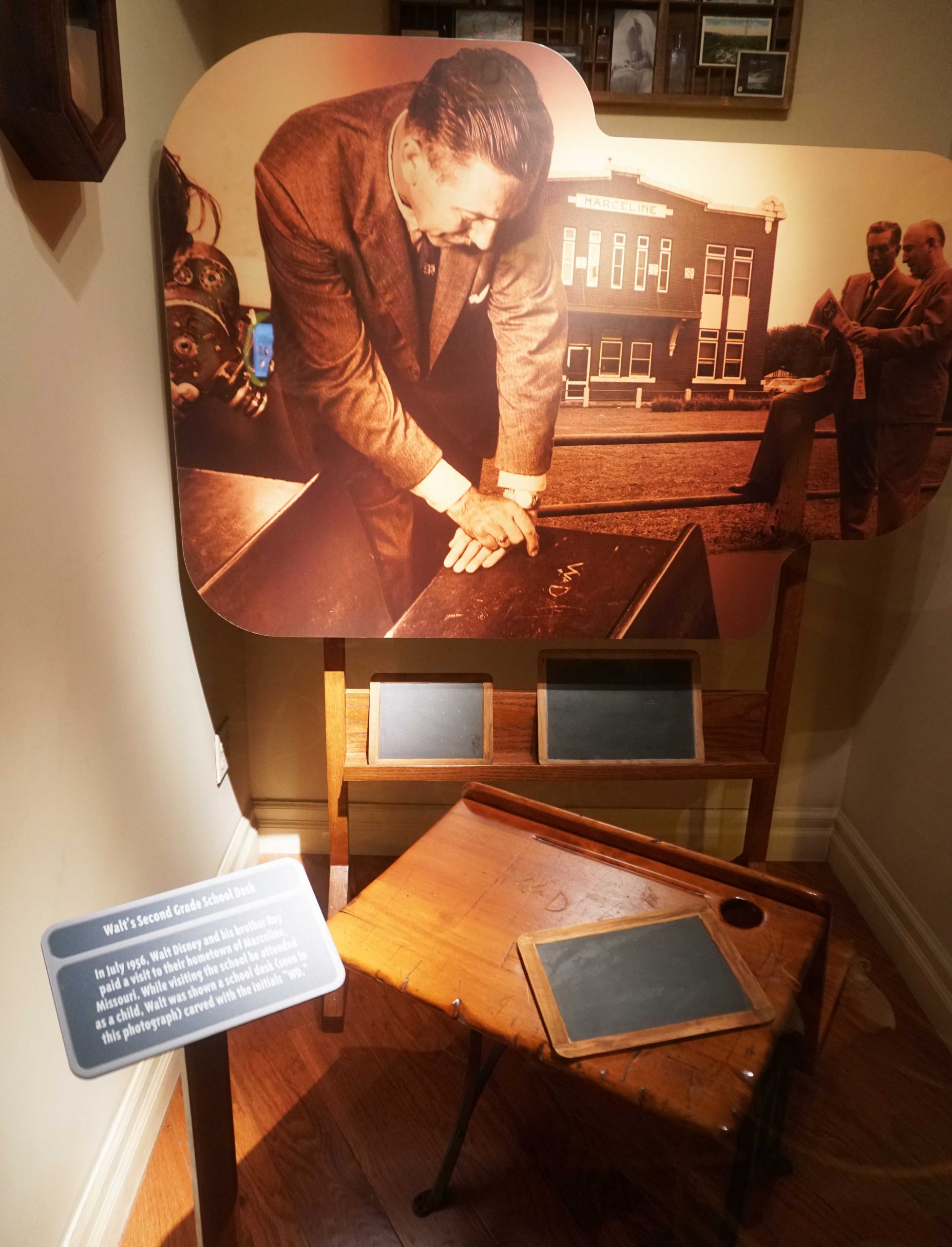 Sitting at this desk = one man’s dream

8. Creepy bench outside the Tower of Terror

This carved stone bench isn’t on this list because it looks comfy, it’s here because of its location. Find it on the left side of the Twilight Zone Tower of Terror’s standby queue as you pass the row of empty fountains, just before getting to the lobby entrance. It’s blocked off by a low wall which can easily be jumped with enough courage (maybe after a visit to Oga’s Cantina?). Sitting here and enjoying the eerie ambiance while reading a good book or people-watching would be my idea of an ideal afternoon. 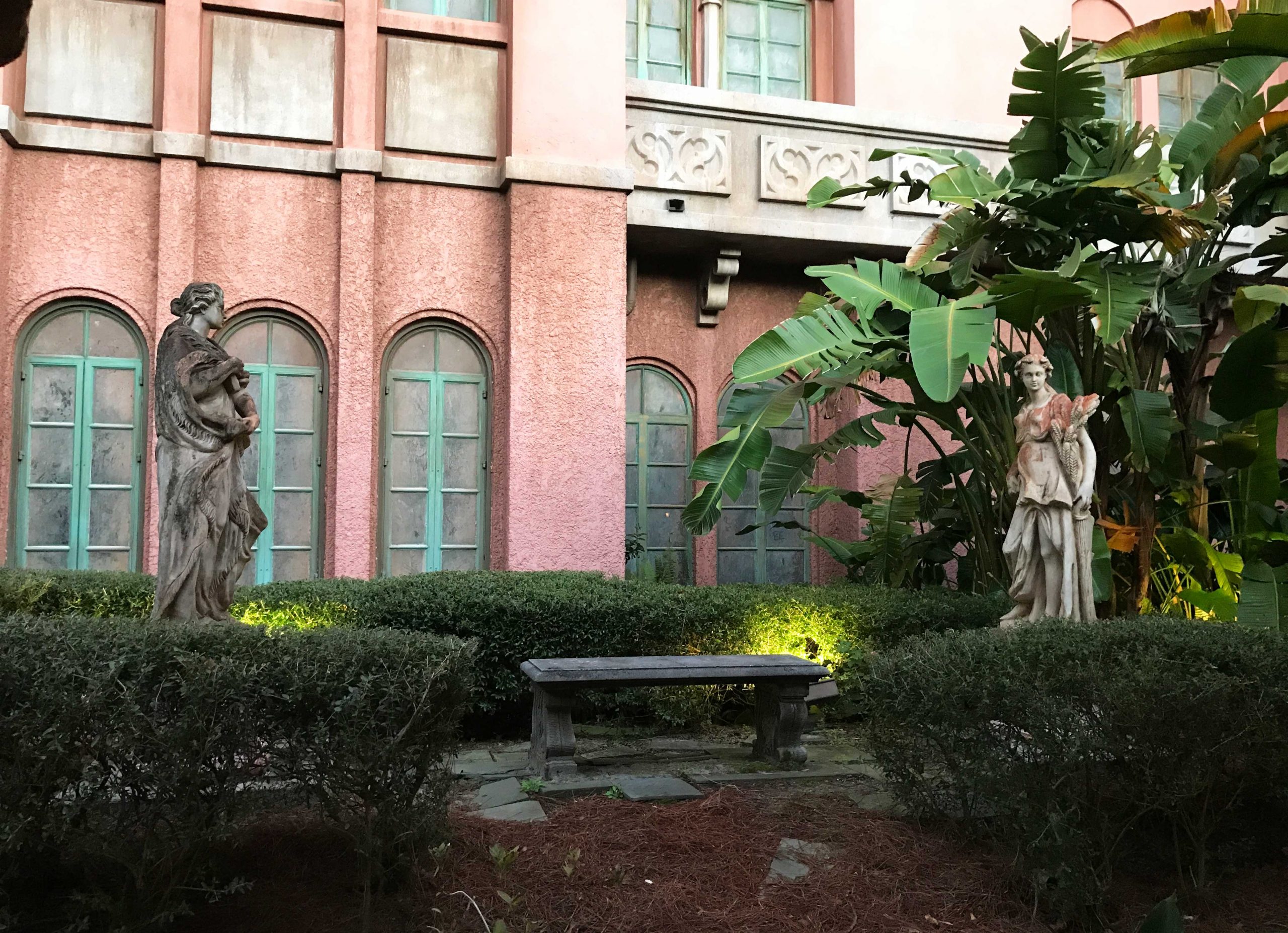 You unlock this bench with the key of imagination – or just jump over the retaining wall.

Moving deeper into the fifth dimension, we find ourselves inside the iconic lobby area of the Tower of Terror queue. This Moorish Revival style room features a number of period-specific furniture including a pair of empty couches that I’d love to hang out on while sipping a scotch mist. 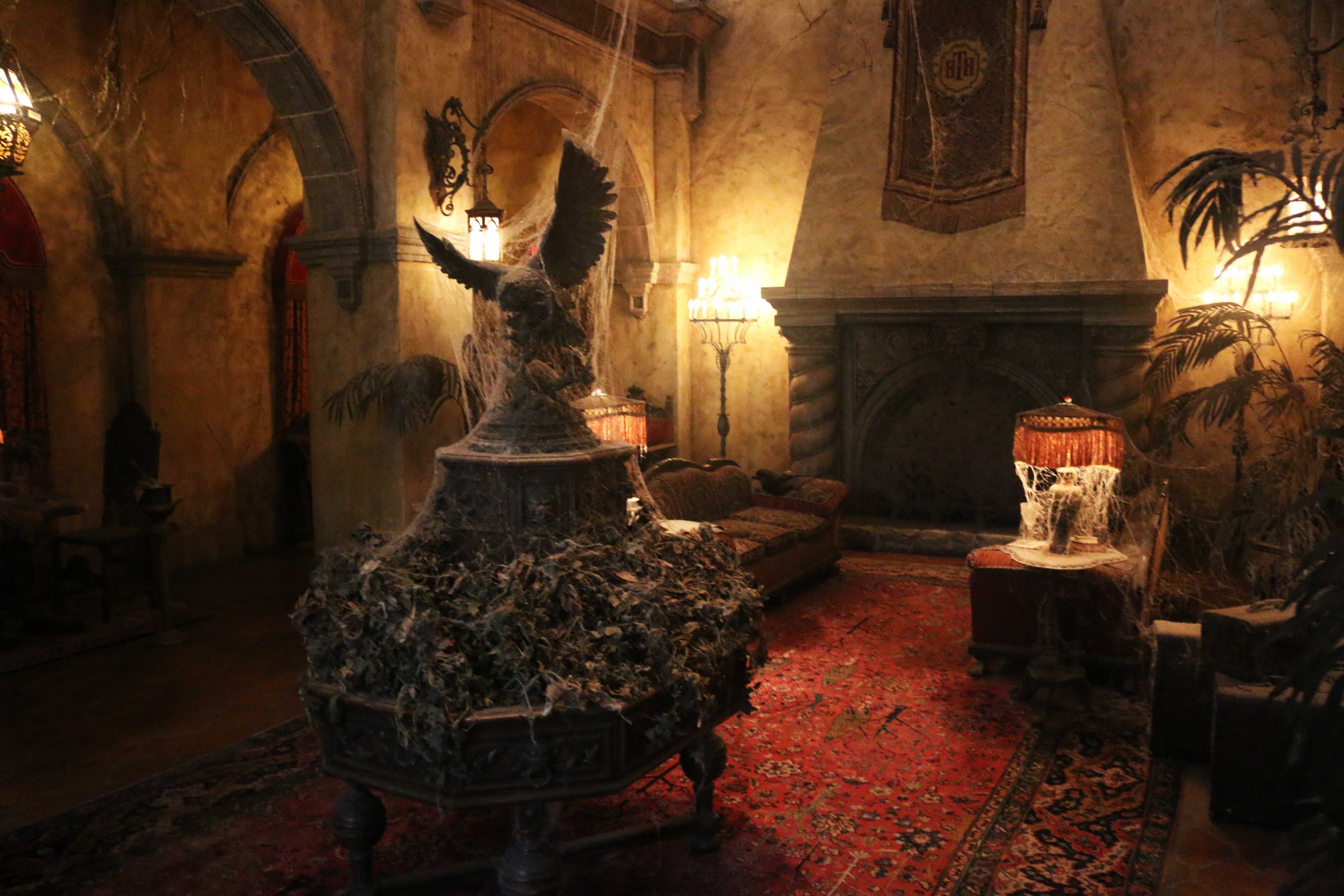 This one would actually rank higher on our list if it weren’t for all the cobwebs.

Did you know that you can actually hang out in the real lobby that inspired the design for this one? Check it out by visiting the Rendezvous Court inside Los Angeles’ Millenium Biltmore Hotel.

I doubt there’s even a chair up there, but Statler and Waldorf’s balcony in Muppet*Vision 3D‘s Grand Arts Theatre would be an ideal place to sit and watch the show while heckling the audience and performers. 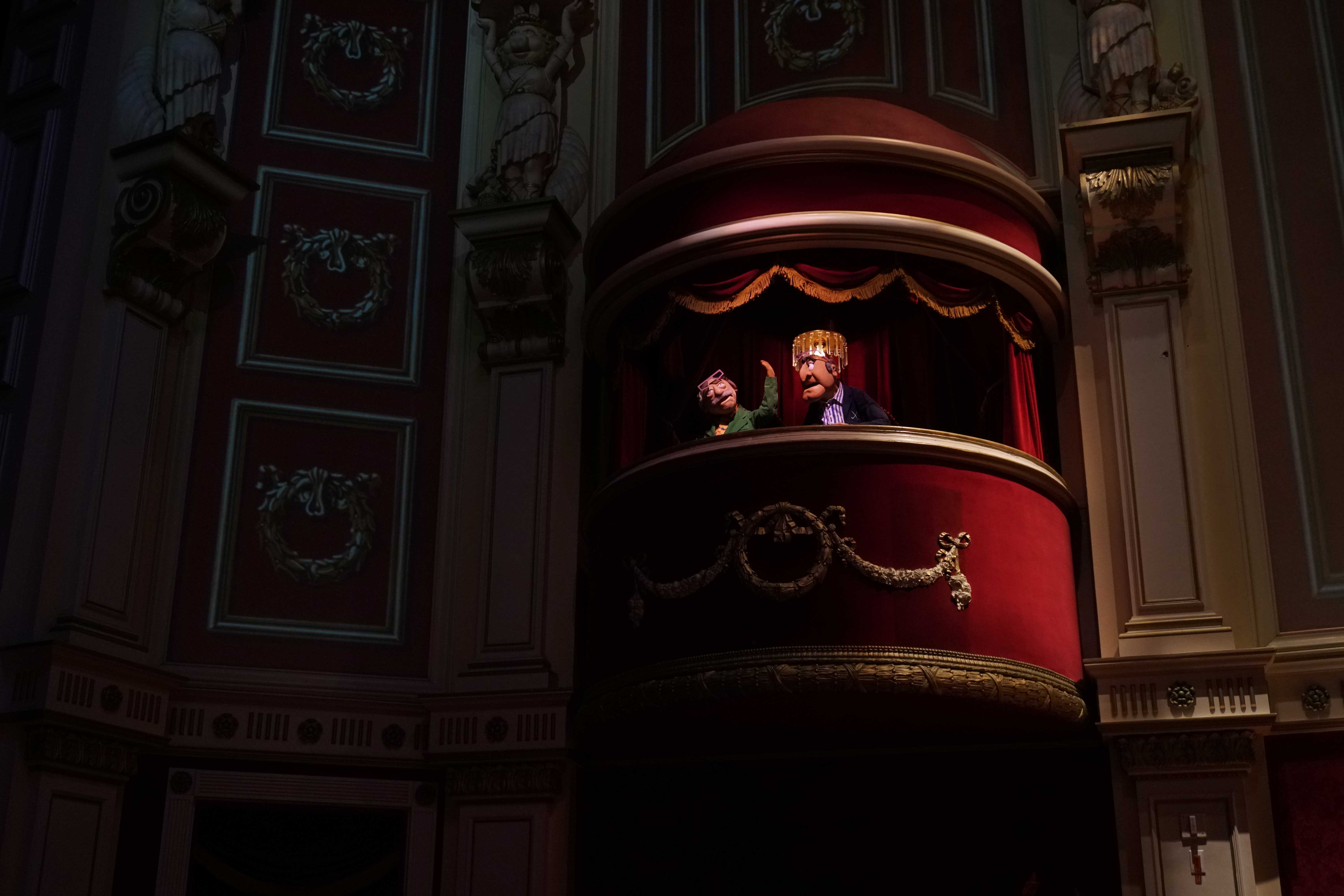 “Do we have time to go to the bathroom before the next show?” “We can’t, you old fool. We’re bolted to the seats!”

The balcony here is meant to resemble the one seen in the Muppet Theatre, the setting for the original Muppet Show and featured in Disney’s 2011 film, The Muppets.

The pre-show of Rock ‘n’ Roller Coaster takes us inside a recording studio where Aerosmith is wrapping up a session. The studio is filled with instruments and equipment but more importantly: chairs! How cool would it be to get behind the drum set or grab that black Les Paul for Joe Perry? 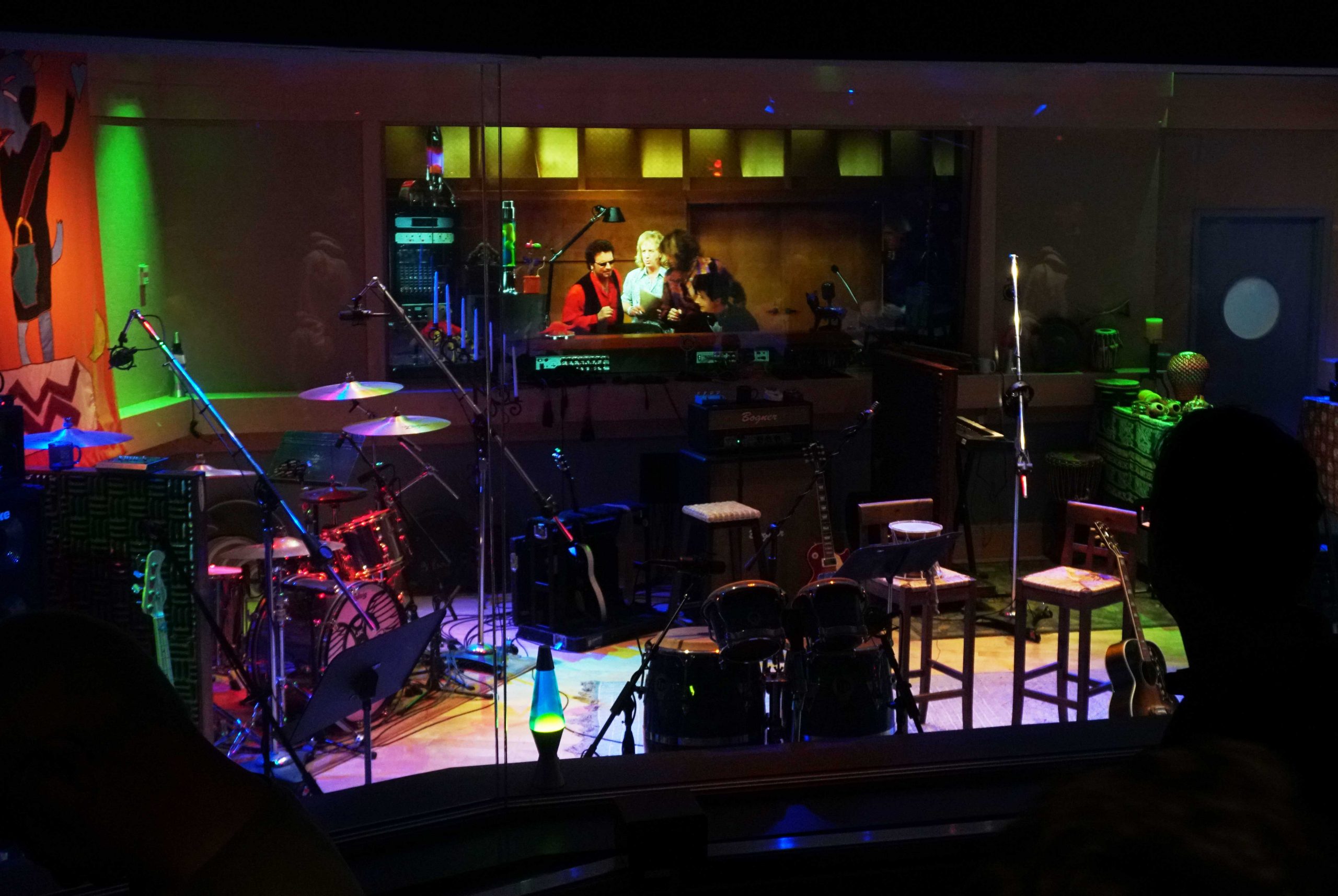 Once upon a time, a cast member named “Chris” would actually head into the studio to grab the black Les Paul. Lucky guy/girl!

4.  Folding chairs on the roof of Restaurantosaurus

As the story goes: the building that houses Restaurantosaurus was an old fishing lodge that paleontologists took over and converted into their dig site headquarters when dino fossils were discovered nearby. In their downtime, the inhabitants would hang out on the roof with a cold beverage, as evidenced by a pair of lawn chairs, cooler, and discarded cans littering the roof just above the restaurant(osaurus) entrance. I would love to climb up there and share a Safari Amber with Dr. Seeker while taking in the sights and sounds of Dinoland U.S.A. 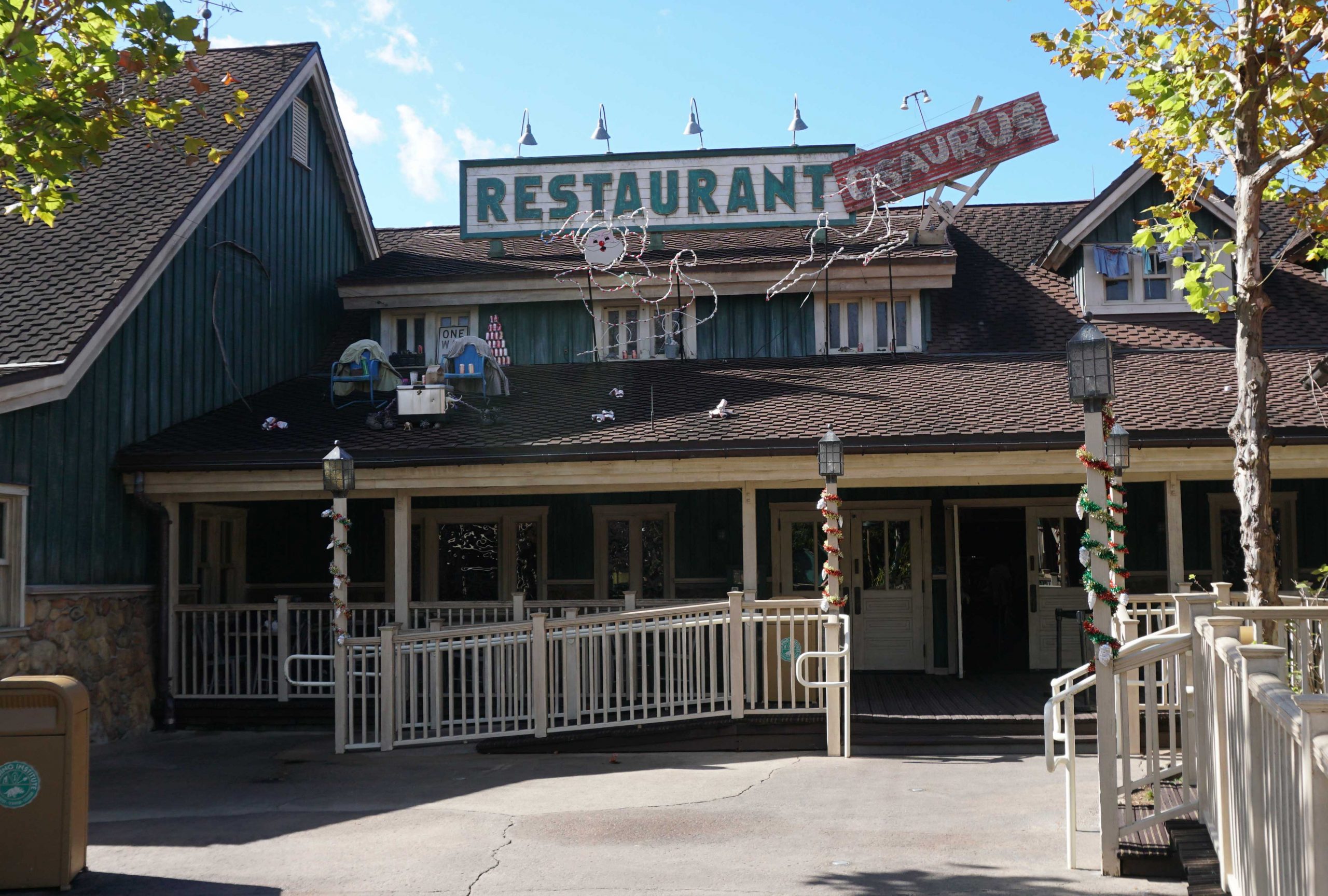 3. Chairs in the lobby of the Imagination Institute

There’s no doubt you’ve passed this pair of chairs along the queue of Epcot’s Journey into Imagination with Figment and had the same thought that I did: what would it be like to pop a squat in one of those bad boys? This one ranks high for me since it’s particularly intriguing how seemingly easy it is to access – the only thing between me and total imagination relaxation is a low hanging rope barricade. One day… one day… 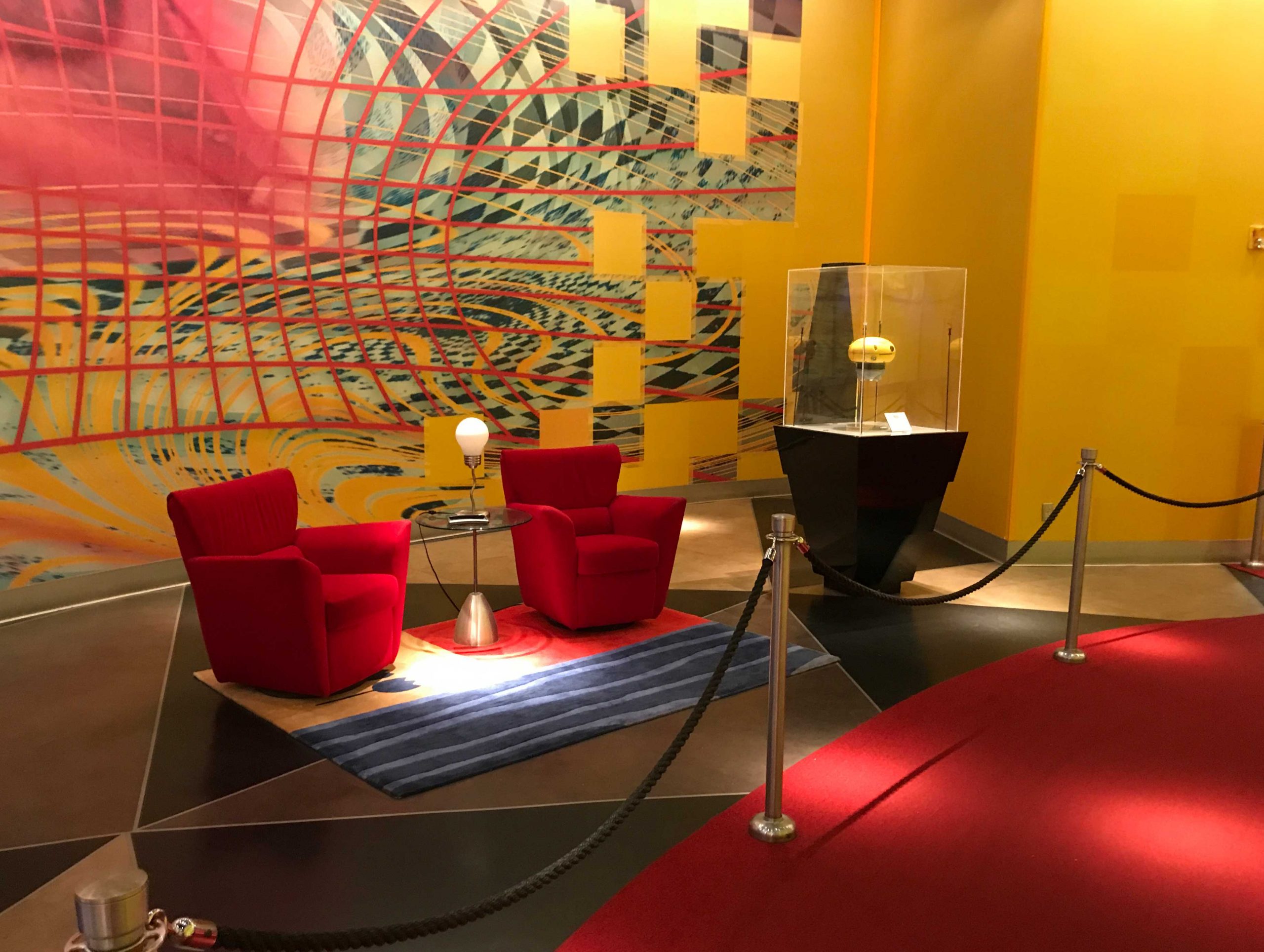 As you can plainly see, chairs work best when they’re set free!

2. The lounge area of Constellations

Space Mountain’s post-show area features dioramas demonstrating futuristic scenes of tourist destinations in space. One of these is a posh hotel/apartment known as Constellations, the city of stars. A sleek, round booth just begs me to hop the handrail and plop my bum. While sitting up there, I imagine that the robot butler will serve me some florescent cocktails and tell me the odds of successfully navigating an asteroid field. 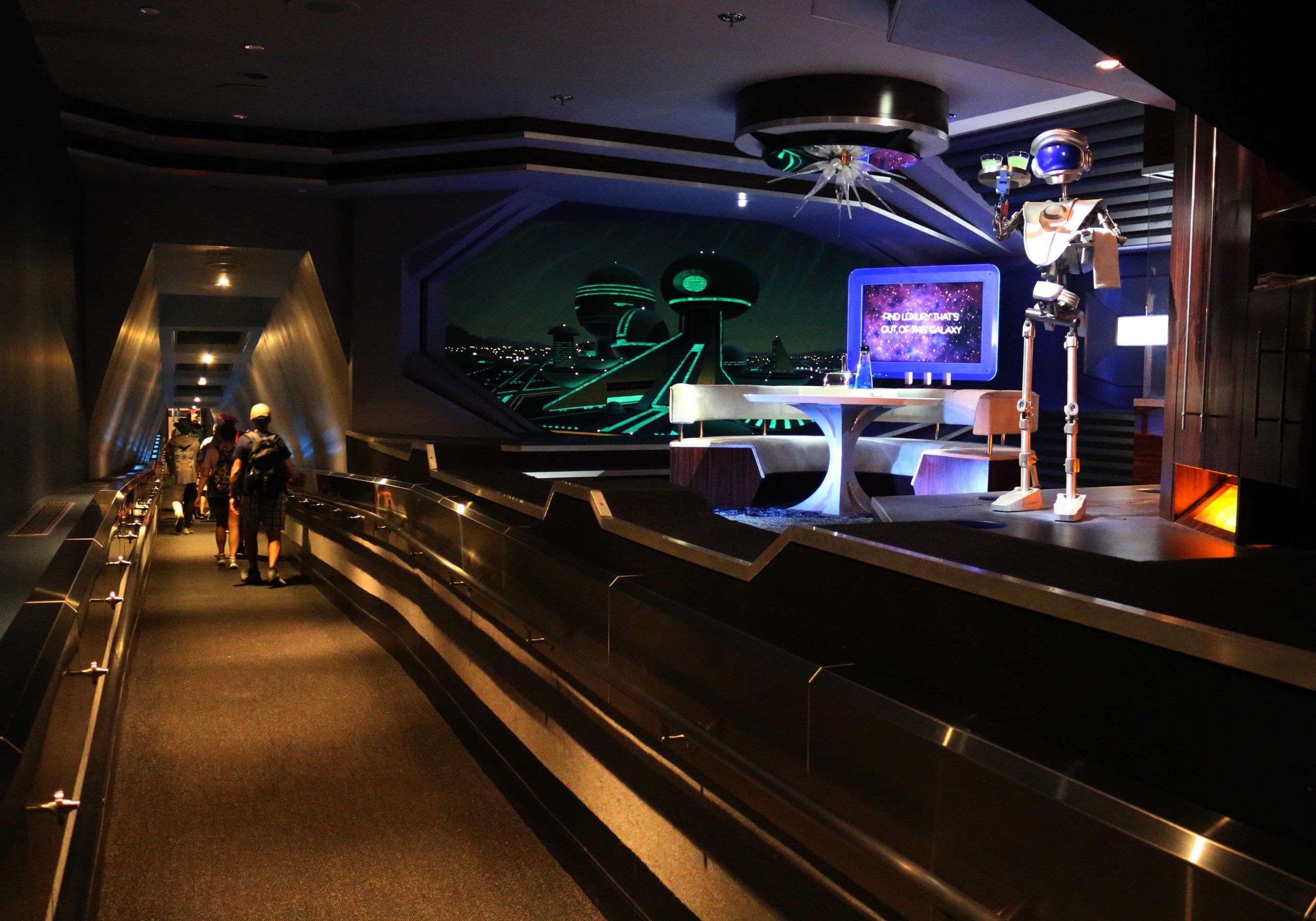 I’m super jealous of every insubordinate cast member that’s no doubt climbed up there to take a selfie in this seat. 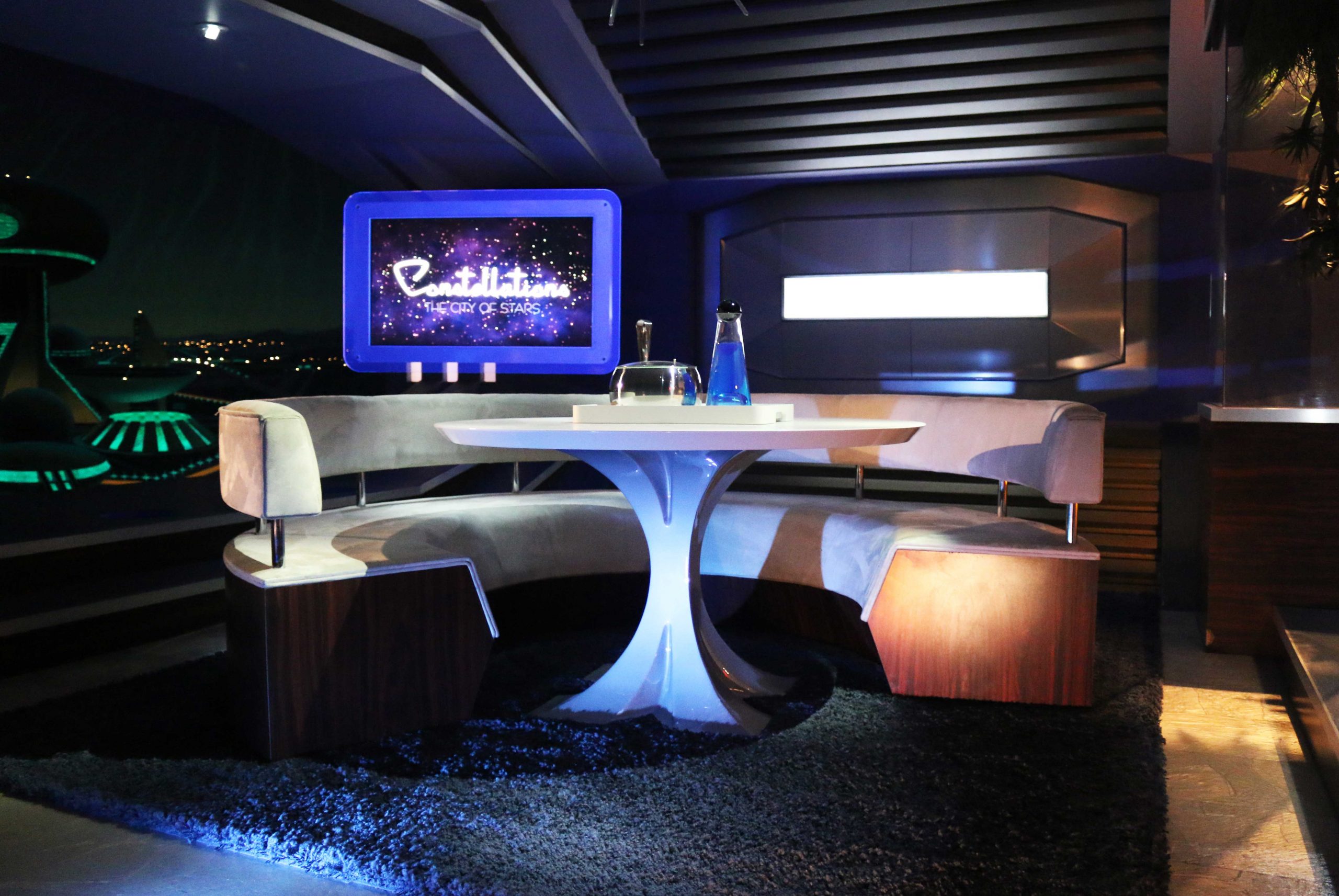 Constellations, the city of seats

The number one place where I’d like to park my rumpus (errr, rump) is in the Halloween scene of Walt Disney’s Carousel of Progress. While there are many, many, seats that would be fun to sit in during this attraction (I’m sure we’ll do another list one day), the booth in this scene piques my interest the most for a few reasons.

One reason is to settle that age-old question of whether or not our carousel dad is wearing pants. Does he even have legs? These things really do keep me up at night and until I can work up the gall to jump onstage and tell John to “scooch over”, we may never know.

Another reason is to simply enjoy the pleasure of putting my arm around an old friend and singing our song: There’s a great big beautiful tomorrow, shining at the end of every day… 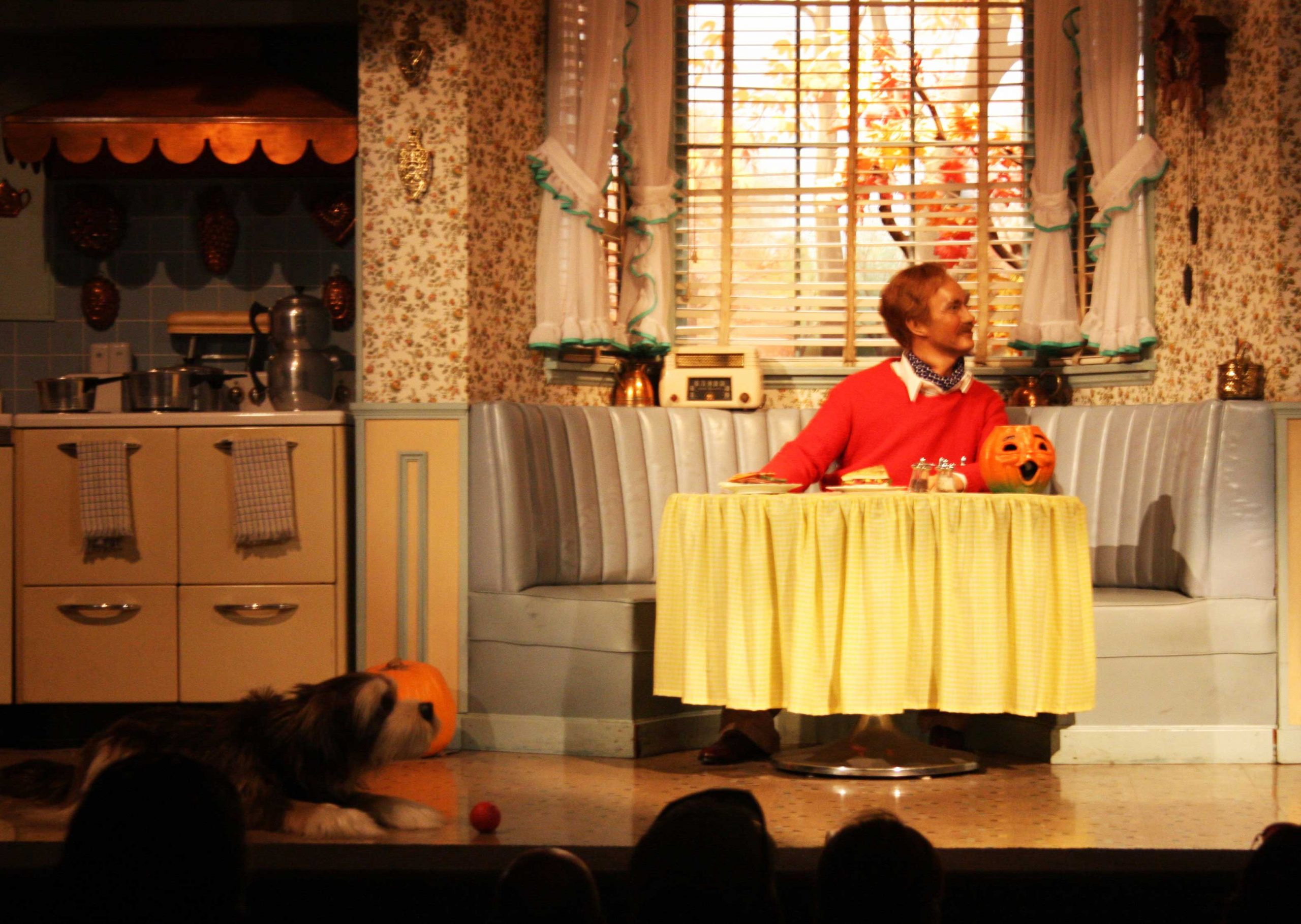 Well, it’s time to move on… help cheer up Sarah by leaving a comment to let me know which seat is at the top of your bucket (seat) list or if I missed any cushy ones around the Disney Parks!